A historic site for families

Spencer-Peirce-Little Farm is a family-friendly National Historic Landmark with activities for all ages. The 230-acre site includes a 1690 manor house that served as the country seat of wealthy Newburyport merchants and an attached farmhouse that was home to a Lithuanian family for most of the twentieth century. Take a tour or come to one of the farm’s many outdoor events, including Vintage Base Ball from May to October.

Spencer-Peirce-Little Farm fosters animals in partnership with the Massachusetts Society for the Prevention of Cruelty to Animals. Visit friendly sheep, goats, chickens, and a horse throughout the year. Learn about life on a farm over the centuries through hands-on activities. Pump water from a well outside the kitchen or sit in a horsehair-covered rocking chair and look through a stereo-viewer in the nineteenth-century parlor. Explore nature trails and enjoy a picnic under ancient maple trees.

Historic New England is following all state, local, and CDC safety guidelines for Newbury. Tour group size is limited. At this time, masks are required for all staff and visitors.

There is plenty of parking at the farm.

This is visitors' first view of Spencer-Peirce-Little Farm. Little's Lane leads to the 1690 manor house. 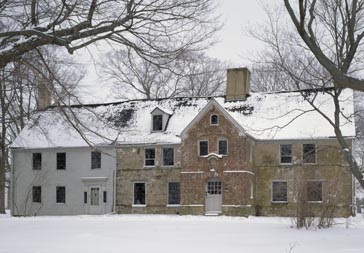 John Spencer was granted a 400-acre parcel, the lion’s share of which now makes up Spencer-Peirce-Little Farm, in 1635 as part of the first allocation of land to colonial settlers. He was an investor in the cattle venture that drove settlement in Newbury, and was a man of means. The town also granted him a house lot of four acres near the landing site in the Parker River.

John Spencer played a prominent role in the early years of the fledgling settlement, representing the town to the General Court in Boston, acting as a captain in the militia, and involving himself in a mill-building venture with friend and fellow wealthy settler Richard Dummer. In 1637, however, both Spencer and Dummer were disarmed for being supporters of Anne Hutchinson, the Puritan spiritual leader who was banished from the Massachusetts Bay Colony after challenging male authority, and part of a heretical sect. He left Newbury, likely intending to return, and left his property to his nephew. John Spencer died in England in 1648 and his nephew sold the property, now smaller by 100 acres, to Daniel Peirce. 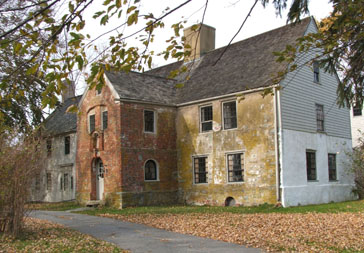 Daniel Peirce Sr. came to Newbury from Watertown in 1638. Like Spencer, he took an active role in the affairs of the new town, and was engaged in blacksmithing, malt making, farming, and cattle raising. When he died in 1677, the farm had greatly increased in value from 500 to 1,200 pounds, due in part to barns and outbuildings he had built on the land and to the growing settlement and scarcity of new land in Newbury.

Daniel Peirce Sr. left the farm to his son, Colonel Daniel Peirce. Col. Peirce held nearly every post available to a man of means in Newbury at the time. He was a justice of the peace, a militia leader, a charter representative, and a member of the Council of Massachusetts Bay from 1693-1704. His status is reflected in his choice of the first pew in the new meeting house, completed in 1699.

Col. Peirce had many properties, and his primary residence until 1690 seems to have been at the upper end of Chandler’s Lane, now Federal Street, in Newburyport. By 1690, however, he had built a massive cruciform-style stone and brick manor house down a long elm-lined allée on his Newbury farm. Why he chose to build a masonry house in an area where wooden houses were the established tradition remains a mystery. It is certainly true that in England stone houses were associated with status, and that many of his neighbors were from areas in England where there were strong masonry traditions, but his choice was nonetheless an unusual one.

Col. Peirce died in 1704, leaving the house to his son Benjamin. The house remained in the Peirce family until 1778. 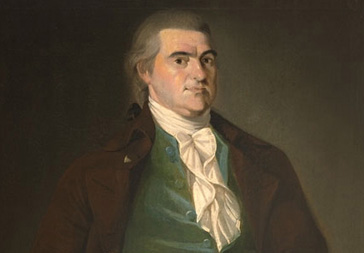 In 1778 Newburyport merchant Nathaniel Tracy purchased the farm from the Peirce descendants. Tracy’s ownership inaugurated an era when the house served as a country seat for families prominent in nearby Newburyport.

Nathaniel Tracy was a very wealthy man, the wealthiest merchant in Newburyport prior to the Revolutionary War. He fitted out a fleet of privateer vessels during the Revolutionary War, and suffered severe financial hardships as a result. By 1786 he was in complete financial collapse, and was sent to live in genteel retirement at the farm. During his early ownership of the farm, Tracy made modest Georgian-style changes to the house, reconfiguring the central chimney, replacing the mantles, and encasing the beams.

When Nathaniel Tracy died in 1796, at the age of forty-five, his widow sold the property to Offin Boardman (pictured), who had once worked aboard Tracy’s ships. Boardman had achieved fame during the Revolutionary War for his daring exploits aboard privateer vessels, which landed him in prison in England twice. After the war, Boardman made significant business dealings from his wharf on the Newburyport waterfront.

Boardman added the wooden wing to the main manor house, adding a Federal parlor and sleeping chamber. He also added the farmhouse to the rear of the manor house and attached them through a breezeway. Boardman used the house for family quarters and then for servants.

Offin Boardman died in 1812, having lost his wharf in the Newburyport fire of 1811. He was in great debt when he died, and a survey map was made of his property in order to settle his estate. This map provided the location of his privy, which was the subject of significant study by archaeologists from Boston University and has yielded many artifacts, featured in the interpretation of his time in the house.

John Pettingell purchased the farm at auction in 1812 and seems to have used it as a summer house, leasing the farmhouse and portions of the stone house to tenant farmers. After he died in 1827, Pettingell’s heirs used the property as an income stream, eventually leasing it to Edward Little in 1851. 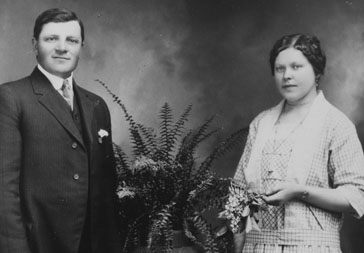 In 1851 Edward Little, a descendant of early settlers of Newbury, leased Spencer-Peirce-Little Farm from the Pettingell heirs. By 1861 his hard work and shrewd business investments made it possible for him to purchase the farm outright. Edward Little believed in the principals of “scientific farming” and also invested heavily in local banks. Throughout the 1860s and 1870s, decorative changes were made to the house to update it for his middle-class Victorian family. A window was added in the front room, the doors were grain-pained, and rugs were installed. Edward Little died in 1877, and the house passed to his two sons, Edward Francis Little (known as Ed) and Daniel Noyes Little (known as Dan). They had a significant dairy operation, and also imported and trained draft horses for use on local farms and in the Coast Guard. Dan and Ed Little both married and had six children between them. By 1930 the surviving three of these six children were being raised on the farm by their paternal aunt, Eliza, after the deaths of their parents from illness or accident.

Eliza Little and her nieces, Agnes, Amelia, and Margaret, never married and lived at the farm until their deaths. They lived carefully and were active in the First Parish Church and in various missionary and anti-tuberculosis efforts.

During much of the twentieth century, the farmhouse was occupied by the Stekionis family, and it was their help and assistance that enabled the four Little women to manage the building and grounds. Jacob Stekionis (pictured with wife Dorothy) had come to the farm from Lithuania in 1912 as a hired hand, and was asked to stay on after the death of Daniel Noyes. Jacob later returned to Lithuania where he briefly courted and then married Dorothy Janusevic. They returned to Spencer-Peirce-Little Farm and raised three daughters in the farmhouse. 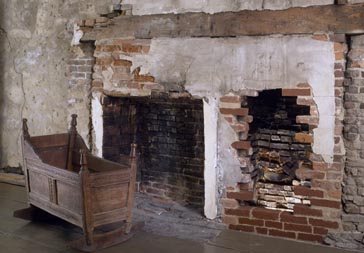 In 1986 the farm passed to Historic New England, and extensive structural work was undertaken immediately. The massive center chimney had partially collapsed, pulling down the floor by up to eighteen inches, and many beams had rotted away from their pockets in the stone walls. After six years of stabilization and preservation, costing more than $1 million, the house was opened to the public for regular hours in 1992. 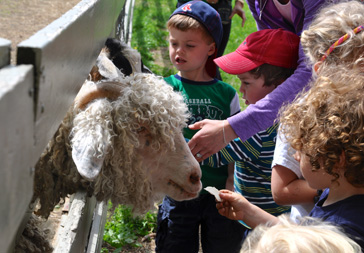 In 2003 Historic New England responded to an overwhelming community need by becoming the first family-friendly farm at Historic New England. The return of animals to the farm was central to this effort, and an innovative partnership with the Massachusetts Society for the Prevention of Cruelty to Animals (MSPCA) brought sheep, goats, chickens, turkeys, and horses to the farm. A year-round preschool program focusing on farm life brought new audiences to the farm, as did interactive stations in the house and new, large-scale family programs. Since 2003, visitation has grown yearly, and the site continues to find new ways to serve families and the community.

Visit nearby Coffin House in Newbury.

Visit nearby Swett-Ilsley House in Newbury.

Sheep Shearing and Opening Day of Vintage Base Ball

More things to do in Newburyport

Newburyport is a small coastal city and a historic seaport with a vibrant downtown and a wide range of natural, cultural, and historical attractions. Newburyport shares Plum Island with Newbury, and the mooring, winter storage, and maintenance of recreational boats, motor and sail, still contribute a large part of the city’s income. A coast guard station keeps a watchful eye on boating activity, especially in the swift tidal currents of the Merrimack River. The Custom House Maritime Museum reminds visitors of the city’s history as a major port; Cushing House, home of the Museum of Old Newbury, celebrates Newburyport’s wealth of Federal architecture; and shopping and dining opportunities abound. Nearby Newbury is known for its farms and natural resources, with both the Parker River National Wildlife Refuge and Mass Audubon’s Joppa Flats Education Center serving as a hub for birders and nature lovers.

Contact the Greater Newburyport Chamber of Commerce for listings of restaurants and lodging, and many more local activities.