Overlooking a farm and pleasure grounds, this country seat, also known as “the Grange,” was a powerful force in the lives of five generations of the Codman family. Each generation left its mark, and the estate came to symbolize the family’s fascinating past.

Today the house is filled with art and memorabilia collected in Europe and America, showing the decorative schemes of every era, including those of noted early twentieth-century interior designer Ogden Codman Jr. The grounds feature a hidden turn-of-the-century Italian garden with perennial beds, statuary, and a reflecting pool filled with water lilies, as well as a 1930s English cottage garden. The carriage house and grounds are available to rent for weddings and other events.

Historic New England is following all state, local, and CDC safety guidelines for Lincoln. Face coverings are required for all staff and visitors. Enhanced cleaning and disinfectant measures are in place. Tour group size is limited.

Parking is located next to the main gate on the left.

MBTA Commuter Rail on the Fitchburg Line to the Lincoln stop. Local taxi service is available from the train station to the house.

Rebecca Gore, the wife of the Massachusetts governor, proclaimed the Codman Estate “the handsomest place in America" in 1799. 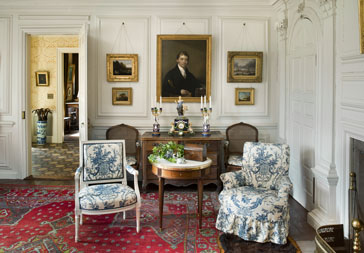 Chambers Russell (1713-1767), a lawyer, legislator, judge, and a founder of the town of Lincoln, built a two-story Georgian mansion house on the property between 1735 and 1741. On his estate, Russell grew corn, hay, oats, and flax and raised livestock and poultry, in part using slave labor. Russell died in 1767, leaving the estate to be administered by executors during the American Revolutionary War years, on behalf of his son Chambers Russell Jr. By 1790 Chambers Russell Jr. had died without children, leaving the property, which included “the Mansion house with front yard” and the “octagon piece of mowing front of the grate house about five acres” to his six-year-old nephew, Charles Russell Codman. Charles’ father, John Codman, was named executor and began immediately to improve the property on his son’s behalf. 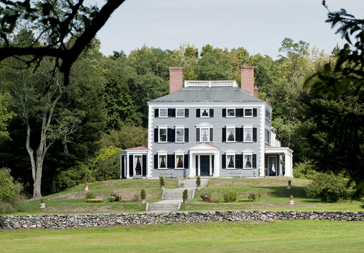 John Codman (1755-1803), who amassed a fortune through shipping and trade, expanded the Codman Estate and used it as his country seat from 1790 to 1803. His improvements brought the house and grounds to a total of 650 acres. Codman’s major impact was to transform the house into a three-story Federal-style mansion, much as it is today. Its design is attributed to the architect Charles Bulfinch.

Influenced by the picturesque views, productive farmland, and gardens of English estates, Codman made improvements to the farm’s agricultural productivity, separated the property’s ornamental landscapes, and installed the invisible retaining wall around the octagon known as a “ha-ha” wall. Codman expanded the house in 1798 and 1799, doubling the staircase, creating a large hall for entertaining, and building a new kitchen ell.

The Codman Estate impressed his Waltham neighbor, his wife’s cousin and a wealthy sophisticate, Rebecca Gore, the wife of a Massachusetts governor, who proclaimed it “the handsomest place in America.” 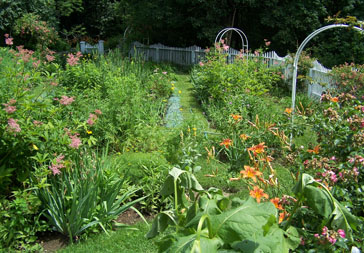 When John’s son Charles Russell Codman (1784-1852) came of age, he inherited the estate. Gradually he sold the house and several hundred acres of land, piece by piece, to support a lifestyle of travel and collecting. A seven-acre strip of land was sold to the Fitchburg Railroad less than 200 yards from the house and, as a result, the MBTA commuter rail train runs past the estate today.

The property was ultimately out of the Codman family for fifty-five years. Charles Russell Codman’s children and grandchildren regretted the sale and endeavored to buy back the property, which they eventually did. 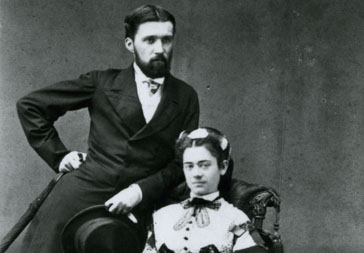 The son of Charles Russell Codman, Ogden Codman, Sr. (1839-1904), married Sarah Bradlee (1842-1922) in 1861. The young couple (pictured) purchased Ogden’s ancestral estate as a country house in 1862 and renamed it “The Grange.” Ogden Sr. worked with his brother-in-law, architect John Hubbard Sturgis, in 1863 on improvements to the house and grounds. They built a new carriage barn, added plumbing and heating, and made several architectural changes. The paneled morning room, which retains its original 1740s woodwork, was redecorated as a library, and the dining room became an Elizabethan-style hall.

The Codmans had invested heavily in Boston real estate. In 1872 these holdings were greatly affected by Boston’s Great Fire. Looking for a more affordable situation while their assets recovered, Ogden, Sarah, and their children relocated to Europe in 1874, ultimately living for many years in Dinard, France.

Ogden and Sarah’s oldest son, Ogden Jr., developed an interest in design and returned to the United States in 1882 to begin a career as an architect and interior designer. His family followed in the autumn of 1884, though they continued to return to Europe regularly.

Ogden Jr. became a successful architect and designer, most famously articulating his design philosophy in The Decoration of Houses, which he co-authored with his friend and client, writer Edith Wharton. He also designed homes and interiors for his society friends, including designs for the Hampshire House in Boston and the bedroom interiors at the Breakers in Newport, Rhode Island.

From the mid-1880s through the early 1900s, Ogden Jr. worked on the interior decoration of the house, emphasizing classicism and Colonial Revival. He removed the billiard table from the billiard room to create a library in the 1890s, making it a less formal space for relaxing and reading. The family’s leisure pursuits were typical of their class and social standing. Brother Hugh was a violinist; Tom a photographer; sister Dorothy enjoyed gardening and collecting; Alice, travel, reading, painting, and needlework. Ogden Jr. continued to travel and settled in France in 1920.

The family’s lifestyle was supported by many servants. The house staff included a cook, chambermaids, chauffeur, parlor maids, and a weekly laundress. In 1888 the Codmans added a new servants’ wing. The new kitchen included a new coal/wood stove and hot water heater, and a bathroom with servants’ living space above on the second floor.

In 1899 Sarah Bradlee Codman began work on an elaborate two-year project to create a walled Italian garden on the northwest side of the house. Ogden Jr. advised his mother on the design which included fountains, a canal, pergolas, and statuary. The garden reflects the Codman sense of classicism and order, sharply contrasting with the picturesque forest and meadows surrounding it. Dorothy, like her mother, enjoyed tending her own garden. She designed a less formal “cottage” garden which was modest in size, but quite sophisticated in design. Dorothy used old-fashioned flowers in the Colonial Revival style, and planned for a succession of blooms throughout the seasons. 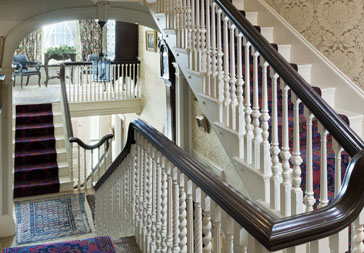 By the mid-1950s the house was no longer filled with servants. Tom and Dorothy were the only Codman children still alive, and lived there quietly among the family heirlooms. Tom Codman died in 1963 and Dorothy in 1968, leaving the house and immediate grounds to Historic New England. The idea to give the house to Historic New England was put in place by Ogden Jr. in 1920, with the intent to preserve an example of an elegant country estate. The Codman Estate gives a glimpse into the story of four generations of one family’s life and of 350 years of history, with special insight into the daily workings, changing fashions, and family ties of the late nineteenth and early twentieth centuries.

The Codman Estate is an outstanding example of a country estate laid out in the English manner. The house is sited on a knoll with a commanding view. The park-like setting includes a ha-ha wall, specimen trees, and plantings. An Italianate garden, hidden in a dell behind the house, dates from the turn of the century. A rose garden near the carriage house, redesigned by Dorothy Codman in 1908, once held more than 250 plant species.

By 1798, John Codman separated the property’s ornamental landscape from its productive farmland, and installed the retaining wall around the Octagon meadow known as a “ha-ha” wall, or sunken fence. Shaded avenues of elms, picturesque vistas, and winding paths impart a natural style alongside the formal, elegant parterres (flat plant beds separated by paths) adjacent to the house. Codman was interested in improvements to the farm’s agricultural productivity; he was a founding member of the Massachusetts Society for the Promotion of Agriculture, established in 1792.

Orchards of apple and peach trees, pastures for grazing, vegetable and flower gardens, and culinary herbs were all planted. Following John Codman’s death, son Charles Russell Codman, in order to finance his lifestyle of travel and art collecting, sold the estate in pieces between the years 1815 and 1844. The property was out of the Codman family hands for fifty-five years and went into a period of decline. By 1899 Ogden Codman Jr. advised his mother on the design of a walled Italian garden in the northwest side of the house.

Host your wedding at the Codman Estate Carriage House.

Visit nearby Gropius House in Lincoln.

More things to do in Lincoln

Lincoln has a rich heritage of cultural and architectural significance. Incorporated in 1754, Lincoln boasts architecture from early Colonial to twentieth-century Modern. There is much to see in this peaceful town including nature centers and walking trails, farms and farmers’ markets, museums, galleries, libraries, and music. Located less than a half hour west of Boston, Lincoln is accessible by car or commuter rail.

Expand your visit to Lincoln and visit the DeCordova Sculpture Park and Museum to see contemporary art indoors and outdoors, Mass Audubon’s Drumlin Farm Wildlife Sanctuary to gain a greater understanding of a working farm and wildlife sanctuary, the Minuteman National Historic Park to witness the American revolutionary spirit, or the renowned Walden Pond State Reservation for a visit to the original cabin site of Henry David Thoreau.

Contact the Concord Chamber of Commerce for listings of restaurants and lodging in Lincoln, Concord, and the surrounding area, and many more local activities.