Sayward-Wheeler House overlooks the York River, which was ideal for shipping merchant Jonathan Sayward, who bought the house in 1735. A successful businessman, Sayward was a judge and leading citizen in York. He enjoyed great community respect, although his Loyalist views were in the minority during the years leading up to the American Revolution. In 1775 he was stripped of his local positions and confined to the town by anti-Loyalist officials.

Sayward suffered through many restless nights, of which he wrote in his diary on May 12, 1777, “I heard the Clock every Hour Last night.” Today, the clock remains in the sitting room near Sayward’s desk, one room away from where he struggled to sleep. The house changed little in the following century, due to the declining wealth of Sayward’s descendants and in deference to the family’s venerable patriarch. The parlor still contains the 1700s furniture and portraits that were there on the eve of the Revolution. It is believed to be one of the best-preserved colonial interiors in the nation.

Please arrive ten minutes before your scheduled tour time. Wear a mask as soon as you get out of your car. Leave all large bags in your car or at home. Maintain at least six feet of distance from other groups. If you are feeling unwell, please call to reschedule.

The house was typical of many houses in York in the first half of the eighteenth century, consisting of two rooms over two rooms with a central chimney. 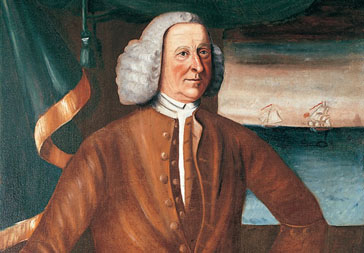 Sayward-Wheeler House in York Harbor, Maine, was described as a new house when Joseph Sayward (1684-1741), a millwright, purchased it from Noah Peck in 1720. Sayward was active in civic affairs and was an elder of the Congregational church, but he was imprudent in his financial affairs, and in 1732 the town of York voted to help him out of debt. Perhaps to provide further financial aid, Jonathan Sayward (pictured) purchased the house from his father in 1735 for £200. After the elder Sayward’s death in 1741, Jonathan Sayward lived in the house with his first wife, Sarah, and his mother, who died in 1759.

The house consisted of two rooms over two rooms with a central chimney and was typical of many houses built in that coastal town in the first half of the eighteenth century. The style is derived from local building traditions, not from the more formal designs in the English architectural pattern books that were used elsewhere in the colonies at the time. According to the diary Sayward began in 1760 and kept almost until his death, in November 1761 he paid £45 to Samuel Sewell, a local joiner, for work on the house. This work probably included installing the paneling, which survives in the parlor and chamber above it. In 1767 Sayward added a small bedroom on the first floor, but otherwise there have been no major alterations to the house in more than 200 years.

Jonathan Sayward referred to himself in deeds and other documents as a trader, a coaster, and a mariner. In 1744 Governor William Shirley of Massachusetts commissioned him to command the sloop Sea Flower in the expedition against Cape Breton Island, Nova Scotia, which resulted in the capture of the French fortress of Louisburg in 1745. By about 1760 Sayward had built up a substantial shipping business, and in succeeding years he was involved in the lumber trade with the West Indies and the fur trade with Canada. His business contacts were strengthened by the marriage of his only child, Sarah, to the aspiring merchant Nathaniel Barrell – a brother of the better-known Boston merchant Joseph Barrell. In 1763 Nathaniel and Sarah Barrell (or Sally, as she was called) moved a few miles up the York River from Sayward-Wheeler House to a farm Sayward owned on Beech Ridge.

As Sayward’s wealth grew, so did his civic involvement. In 1761 he was appointed Justice of the Peace, in 1768 Justice of the Quorum, and from 1766 to 1768 he was given the great honor of representing York in the General Court in Boston. A turning point for Sayward and the American Colonies came in June 1768, when the General Court took a vote on whether or not to rescind a letter it had issued the winter before inviting the other colonial governments to join Massachusetts in forming a common body to oppose certain British duties and taxes. The letter was a clear sign of growing colonial resistance to British rule and the royal government ordered it be rescinded. Sayward was a staunch Loyalist. He was pessimistic about the ability of the colonies to unite and he feared they would pay dearly at the hands of the mother country should they try. He had opposed the letter and was among only seventeen of the 107 members of the General Court who voted to rescind, as the royal governor ordered. The seventeen “Rescinders,” as they were called, came under bitter attack in newspapers, broadsides, and in caricatures. Sayward wrote in his diary, “we are treated with all contempt.” In a drawing by Paul Revere, the “Rescinders,” including Sayward, were caricatured being driven into hell by the devil.

Not surprisingly, Sayward was not re-elected to the General Court after this incident, but he continued his civic involvement, serving as both Special Justice of the Court of Common Pleas and Judge Probate of York County in the 1770s. During these years, Sayward’s diary entries reflect his continued dismay at the disrespect shown the royal government in Massachusetts and his growing worries about the future of the colonies. Sayward was particularly upset by the Boston Tea Party of December 1773 and argued vehemently against York’s approval of the “actions in Boston” in a two-day town meeting. He even sparred good-naturedly with the visiting John Adams during a dinner party in York later that year, urging Adams to be cautious in his “expedition to Congress.”

Sayward’s continued outspokenness put his personal safety in danger as revolutionary fervor grew. While other Tories met with violence or fled for fear of it, Sayward stood his ground, narrowly eluding harm on a number of occasions. In October 1774, for example, Sayward heard a rumor that he was to be “mobbed.” He contacted Benjamin Chadbourne of Berwick, where the mob was said to be assembling, asking for his assistance in discouraging the crowd. The mob never materialized. While holding court in York County in January 1775, Sayward and other judges were confronted by an angry crowd. Sayward described John Sullivan, a member of the Continental Congress, as “heightening the people by haranguing them on the loss of their privileges” and Daniel Bragdon as “collecting a great crowd around him and inflam[ing] them in a most mad manner.” Sayward defused the situation by refusing to sit in judgment on any cases that day, and eventually the crowd broke up peaceably.

Sayward described 1775 as a “year of many trials.” It was a year in which his wife of thirty-nine years died, he was stripped of his civic positions, and he was sequestered in York. His confinement restricted his ability to conduct business and his finances suffered. Yet Sayward’s loyalty to the Crown did not sway, and though he spent many restless nights in which he later wrote “I heard the hourly chiming of the grandfather clock,” he and his properties survived the Revolution relatively unharmed.

In 1779 Sayward married his second wife, Elizabeth Plummer of Gloucester, Massachusetts. In the 1780s and 1790s he often visited friends in Boston and entertained others at his house in York. He noted in his diary in 1788 that his estate was diminishing, but he continued to take on apprentices to work in his warehouses. One of these was his eldest grandson and namesake, Jonathan Sayward Barrell, who attended Dummer Academy in Newbury, Massachusetts, and then returned to York in 1786 to work for his grandfather. In 1795 Sayward Barrell, as he was called, married Elizabeth Sayward’s niece Mary Plummer, and set out to establish himself as a prosperous merchant. 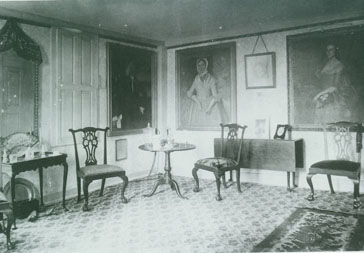 When Jonathan Sayward died on May 8, 1797, at the age of eighty-four, he bequeathed to his grandson, Jonathan Sayward Barrell, his house and its contents. Specifically mentioned in the will were the tall-case clock, a map of North America, and the “Family & other Pictures.” He provided his wife Elizabeth with the use of the northwest part of the house during her widowhood and gave her outright enough furniture for her comfort.

Sayward Barrell’s ill luck as a merchant kept the house from being much altered during the nineteenth century. Fragments of wallpaper of the Federal period and a few pieces of Federal furniture indicate that the house was to some extent redecorated in the early years of the nineteenth century. However, Jefferson’s Embargo of 1807 and the War of 1812 destroyed Barrell’s financial stability, and he started to operate a local store.

The eight Barrell children were well educated, but money was in short supply and it was a constant struggle to keep the house in the family. In 1822 Barrell was forced to mortgage the house to Theodore Lyman, a friend who was living in Waltham, Massachusetts (see Historic New England’s Lyman Estate). It continued to be mortgaged to members of the family or friends until the mid-nineteenth century. In 1822 Barrell sold to his daughter Elizabeth most of the furnishings in the house in order to pay the legacies from an estate of which he was executor. The primary documentation for the furnishings in the house today is the list of objects in that sale and the objects listed in Jonathan Sayward’s will.

Elizabeth Barrell and her sister Mary took on the responsibilities of the household early in life. Their mother died in 1814 and their stepmother, Anna Plummer (their mother’s sister), in 1826. They remained at home after their brothers left, and cared for their father until his death in 1857. Through the generosity of their brother Joseph, they received the title to the house in 1841. With the money received from the sale of Jonathan Sayward’s sawmill in 1859, they made repairs to the house and some alterations to the ell. The alterations included carving out a new east-facing entry hall from the large kitchen. With the addition of the new entry, the sisters re-oriented the house away from the water and toward the street.

Elizabeth and Mary Barrell took great pride in showing the house of their “venerable ancestor” to visitors, and it is apparent that their reverence for it prevented them from even rearranging objects within the house, especially in the parlor. At Mary Barrell’s death in 1889, the house was left to her only nephew, George Octavius Barrell (1849-1900). The inventory of her estate indicates that a sofa, a rocking chair, and stoves were the few furnishings that had been added since the list made in 1822. 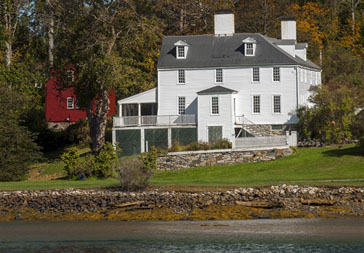 In 1900 the house and contents were purchased by Elizabeth Cheever Wheeler, a direct descendant of Jonathan Sayward who had visited the house frequently when it was occupied by the Barrell sisters. Without detracting from the architectural integrity of the exterior, she added a porch and dormers on the ell to accommodate bathrooms. The character of the interior was retained as well, although the woodwork was painted white, the walls were re-papered, and straw matting was laid on floors. Mrs. Wheeler and her family summered in the house until 1977.

More things to do in York Harbor

York Harbor is one of three distinct areas that make up the Yorks of coastal Maine. A visit to York Harbor, York Beach, and York village offers something for everyone. The long beaches on the Atlantic Ocean can keep a family busy all day, the museums and art galleries in the village provide educational and cultural experiences, and dining in York is critically acclaimed. Seventy miles north of Boston, a visit to the Yorks is an easy day trip.

Expand your visit to York by experiencing the Museums of Old York or visiting Short and Long Sands State Beaches. Find information on restaurants, lodging, and local events at the Greater York Chamber of Commerce.