The house that started it all

In 1911 Swett-Ilsley House became the first property acquired by Historic New England, just a year after our founding. The original portion, built in 1670 by Stephen Swett, was one room deep, and later additions more than doubled the size of the house. Over the centuries the building served as a tavern, chocolate shop, chandlery, and press room, in part due to its location on Newbury’s most traveled road.

Swett-Ilsley House was brought to the attention of Historic New England founder William Sumner Appleton by an acquaintance who believed it to be one of the oldest surviving houses in the region. After the house was acquired for $2,400, nineteenth-century building layers were removed to expose the earliest architectural features. It has one of the largest fireplaces in New England, more than ten feet wide, and containing three beehive ovens.

Historic New England is following all state, local, and CDC safety guidelines for Newbury. Tour group size is limited. At this time, masks are required for all staff and visitors.

Swett-Ilsley House is on Route 1A just over the Newbury border from Newburyport.

There is no lot, but on-street parking is permitted for short periods of time.

Tales and Ales nights at Swett-Ilsley House are a reminder of when the building served the town as Swett's Tavern in the late 1600s. 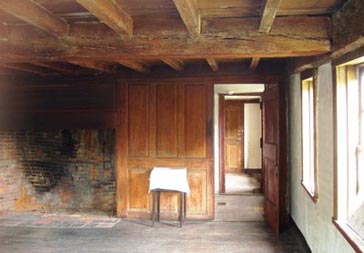 Swett-Ilsley House was built c. 1670 by Stephen Swett. It originally had a southern orientation, with the original front door in the location of the current western window. The house was a single room with two stories. Houses were often enlarged shortly after their construction, since they were built quickly if there was an immediate need for shelter. Houses typically evolved longitudinally east to west, becoming two rooms with a central chimney. At Swett-Ilsley House, however, additions were made to the north (in two major phases), because of the limits of the site and the property line. The entire roof changed so that the entryway faced the road. The final configuration of the house, with the addition to the north and west, occurred sometime between 1756 and 1820.

Stephen Swett apparently built this house on the lot he reserved for himself in the southern corner of a larger lot he had sold to Hugh March Sr. just to the north. At this other location was the ordinary, or tavern, for Newbury. 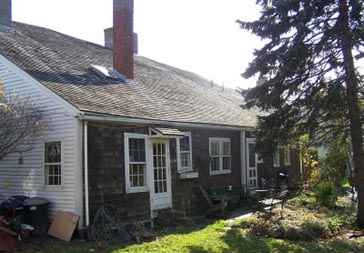 From about 1715 to 1720, the house was enlarged by the addition of a second single-room household (with its own door) north of the original block. A new roof — made in part with salvaged rafters of the older roof — was built over the whole, changing the ridge pole direction from an east-west to a north-south axis. The chimney, then located at the northwestern corner of the main block, was retained, but its upper stack was probably modified at that time. The 1720 addition contains one of the largest fireplaces of the period, measuring: 10′ 3″ wide, 3′ deep, and 4′ 8 ½” high, and it sits atop a solid stone boulder base measuring 18′ x 8′ x 7′ high from the cellar floor.

Swett-Ilsley House has served as the location of small business, craft, or industry for most of its existence. The lot has always been small. Evidence suggests that many of the owners carried out their trade on the site. Occupants listed or industries associated with it include carpenter, coordwainer, saddler, joiner, shopkeeper, innholder, chocolate milling, tallow chandlery, tobacconist, and blacksmith. The owners did not apparently acquire extensive land holdings elsewhere to supplement their living with agricultural pursuits. The central location of the house across from the meeting house and, from 1734 to 1780, just south of the Town House where Essex County courts were held, must have been an advantage to people pursuing these trades.

In 1756 the house’s irregular shape was somewhat squared when the purchase of land to the north yielded an opportunity to build a final northern addition of single-room plan with stair-hall and separate chimney. 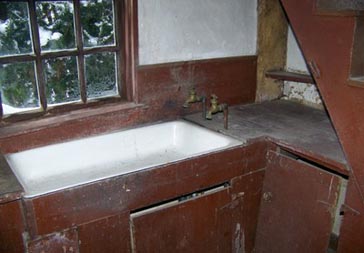 Multiple generations of the Ilsley family lived in the house through the nineteenth century, and partitions and additions built throughout the house reflect their changing family configuration. 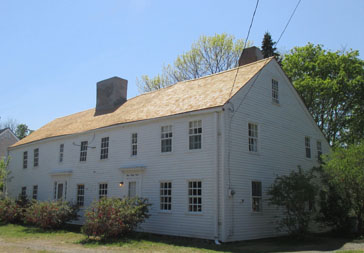 In 1911 the house was purchased by Society for the Preservation of New England Antiquities, now Historic New England, its first architectural acquisition. With advice from restoration architect Henry Charles Dean, Historic New England removed layers of lath and plaster to reveal original timbers, early eighteenth-century paneling, and one of the largest fireplaces in New England. Restoration stopped when funds were exhausted, before any long-gone original features like diamond-paned casements were recreated, resulting in a house with an unrestored eighteenth-century exterior and a partially restored interior reflecting both the seventeenth and early eighteenth centuries. After restoration, the house was rented to a series of tenants, who operated a tea room there until 1965 when the house became a museum.

Visit nearby Spencer-Peirce-Little Farm in Newbury.

Visit nearby Coffin House in Newbury.