In a picturesque setting overlooking the Salmon Falls River, this striking Georgian mansion, a National Landmark c. 1785, and its landscape share a history that mirrors that of its Southern Maine region. Home to the Wabanaki people, the site was purchased unceded by merchant Jonathan Hamilton for his shipping business in the eighteenth century, farmed by the Goodwin family in the nineteenth century, and restored as the summer retreat of Emily Tyson and her stepdaughter Elise at the turn of the twentieth.

Today Hamilton House reflects the occupancy of the Tysons in the early twentieth century. It is one of the region’s quintessential country estates of that era. The house features two whimsical murals commissioned by the women as well as antique furnishings and handcrafted decorative arts they collected. The elaborate perennial garden, with its charming garden cottage, provides visitors with a place to stroll and picnic overlooking the river.

Please arrive ten minutes before your scheduled tour time and meet your guide at the white tent. The visitor center is closed. Wear a mask as soon as you get out of your car. Leave all large bags in your car or at home. Maintain at least six feet of distance from other groups. If you are feeling unwell, please call to reschedule.

From the south, I-95 to Maine Exit 3; from the north, after the York tolls, take Exit 2. Follow Route 236 north for 9 miles; after junction with Route 91 take first left onto Brattle Street; take second right onto Vaughan’s Lane and continue to end.

Ample parking in field above house. Follow signs from the parking area to the visitor center located in the brown garden cottage. 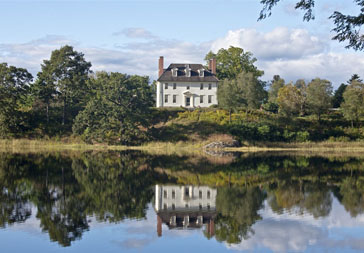 For at least 13,000 years, the Wabanaki, specifically the Western Abenaki nation of the Wabanaki Federation, lived on and with the land in this area they called Quamphegan. The Wabanaki travelled locally and seasonally, planting crops such as squash, beans, and corn in the spring, harvesting fish from the river and gathering berries in the summer, and hunting for survival through winter.

Jonathan Hamilton (1745-1802) was a Berwick, Maine (then still a part of Massachusetts), native who rose from humble beginnings to become the most prominent merchant in the region by the mid-1780s. Hamilton began his mercantile career selling local fish and timber. During the American Revolution he amassed a fortune through privateering ventures that allowed him to expand his business into shipbuilding, timber harvesting, and partial holding of local mills. Owning sugar plantations on the island of Tobago, West Indies, Hamilton was directly involved in the enslavement of people and his wealth founded on the forced labor of those in bondage.

Between 1785 and 1788 Hamilton created his own country seat at Pipe Stave Landing, building a grand mansion on the bluff overlooking the river. Tax records from 1798 indicate that Hamilton’s house was the highest valued in Berwick. In fact, it was taxed twice as much as the next best house, Tilly Hagen’s house (today known as Sarah Orne Jewett House in downtown South Berwick).

After Hamilton died in 1802 his sons did not carry on the business at the same level of prosperity. There are allusions to their lack of ability and integrity, but most likely they were caught in the crunch of the Jefferson Embargo of 1807 and the War of 1812. The embargo and war badly damaged New England’s seaport economy, hastening the decline of many family fortunes and the death of small shipping centers like Berwick.

Hamilton’s daughter Olive and her husband Joshua Haven purchased the property from Hamilton’s sons, living there between 1811 and 1815. The property was owned by Nathan Folsom, a former business associate of Hamilton, from 1815 to 1839. Folsom, who purchased the house as an investment, probably leased it during this period. 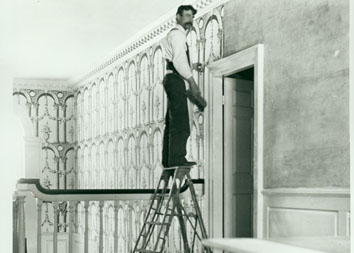 In 1839 Hamilton House was purchased by Alpheus Goodwin and his wife Betsy. The Goodwins were farmers and, as New England’s economy shifted away from shipping and toward agriculture, it was fitting that the town’s landing now became a family farm.

Several generations of the Goodwin family raised sheep and a variety of other crops at Hamilton House. Although the family enjoyed several decades of prosperity, the New England agricultural economy began to suffer from western competition toward the end of the nineteenth century. As a result, the family’s resources diminished and the house fell into disrepair. With growing opportunities for well-paid factory work in South Berwick and surrounding towns, and agriculture on the decline, the Goodwin family decided to sell the farm. 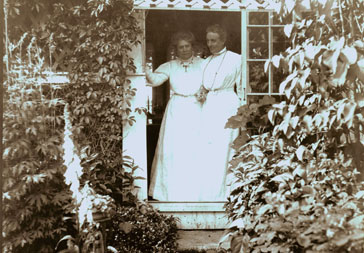 The Goodwins could afford to make few changes during their tenure in the house, making it a preserved example of early architecture. The old-fashioned look of the house endeared it to local author Sarah Orne Jewett, who feared it might be torn down if sold to the wrong buyer. In 1898 Jewett convinced her friend Emily Tyson (shown, left, with Jewett), widow of the president of the Baltimore and Ohio Railroad, and her stepdaughter Elise Tyson (later Mrs. Henry G. Vaughan) to purchase the house. The Tysons were part of a new wave of summer residents who were caught up in the Colonial Revival romance of owning country houses which reflected the grace and prosperity of colonial forebears and provided a healthful rural retreat away from the heat and pollution of cities.

The Tysons hired Herbert Browne of the Boston architectural firm Little and Browne to oversee some interior changes and to design additions to the west and east sides of the house. The Tysons also embarked on creating a grand Colonial Revival-style garden at the east side of the house encircled by an elaborate pergola. All major work was completed by 1900. Important additions to the property made in the following decade included murals painted in the parlor and dining room of the house by George Porter Fernald and the construction of a charming garden cottage fitted with interior paneling salvaged from a colonial home in Newington, New Hampshire. Luckily, Elise Tyson was an accomplished amateur photographer whose photographs of interior and garden views provide a rare and wonderful documentation of the early years the ladies spent at the property.

After her stepmother’s death in 1922, Elise Tyson Vaughan and her husband Henry Vaughan (married 1915) were encouraged by William Sumner Appleton, the founder of Historic New England, then known as the Society for the Preservation of New England Antiquities, to keep the house. The Vaughans had built a house, again aided by the firm of Little and Browne and with murals by George Porter Fernald, in Sherborn, Massachusetts. Around 1925, Elise did some redecorating at Hamilton House in keeping with the spirit of the earlier era and summered there until her death in 1949. 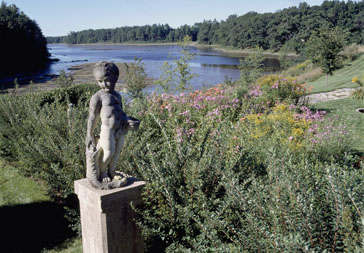 Elise Tyson Vaughan bequeathed Hamilton House and its gardens, outbuildings, and surrounding fields to Historic New England in 1949. She left the adjacent woods to the state of Maine in the name of her late husband, Henry Vaughan. Today the woods have many popular hiking trails and are maintained as Vaughan Woods State Park.

Shortly after Historic New England acquired the property, the garden pergola, which had fallen into disrepair and was nearly destroyed in a hurricane, was removed. The architectural additions made in the Tyson era, including the kitchen wing on the east side of the house and the bedroom and porch on the west, were also removed to reveal the house in a form more closely reflecting Jonathan Hamilton’s occupation. Although we may regret the removal of these architectural elements today, they were, at the time, in keeping with current attitudes toward preservation and restoration to early periods (at the expense of later additions) prevalent in the 1950s. 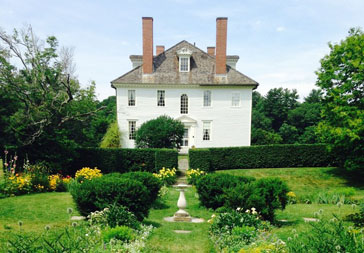 In 1987 Historic New England embarked on a project to recapture the Tysons’ Colonial Revival vision of Hamilton House. The bases of the restoration were interior and exterior photographs of the house and gardens taken by Paul Weber for a series of articles published in House Beautiful magazine in 1929. Major garden restoration began in 1992 and continues today.

Today’s Hamilton House landscape reveals its eighteenth-century mercantile roots, nineteenth-century agrarianism, and twentieth-century use as a country retreat. Known as Pipe Stave Landing, this site is located ten miles from the Atlantic Ocean. Alpheus and Betsy Goodwin bought the property in 1839 to farm and produce wool. They planted orchards, fenced fields for their sheep, and built a barn.

In 1898 Emily Tyson and her stepdaughter Elise purchased Hamilton House. Working with architect Herbert Browne, they fashioned the property into a pleasure ground embodying a romantic vision of America’s colonial past. Fences were removed and the barn relocated to make the space adjacent to the house a perennial garden. A vine-draped kitchen ell visually linked the house to a plant-covered pergola surrounding the garden. Past a sundial and marble fountain, granite steps led to an arch toward the fields rising to the east.

Additional elements served both to enclose garden rooms and frame views to the river, an iconic elm tree, and artfully constructed haystacks. The garden also included opulently casual flowerbeds, a tea terrace, and worn millstones. By 1907 a cottage served as garden folly and destination. In the main house, murals show elegant strollers enjoying riverside gardens. The bond between house, garden, and nature remains today. Guests see what Hildegard Hawthorne said in 1910: “It is all one harmony, house and grounds and human spirit.”

Host an event on the Hamilton House grounds.