Writer Sarah Orne Jewett was born in her grandparents’ eighteenth-century house. She lived there with her family until 1854, when they built a Greek Revival house next door. As Sarah gained attention as an author, she and her family lived in the two Portland Street homes in the center of town. Jewett and her older sister Mary inherited their grandparents’ house, now a National Historic Landmark, in 1887. It inspired Jewett’s novel Deephaven.

Today, Sarah’s beloved home is Sarah Orne Jewett House Museum. It reflects not only the sisters’ eclectic tastes and their desire to preserve family’s tradition, marrying Georgian architecture with Aesthetic Style; the house also reflects the life, work, and passion of Sarah, who created a life of artistic and literal freedom for herself in Victorian America. The Greek Revival house next door is a visitor center incorporating a museum shop, programming space, and community meeting space. Historic New England has launched a series of digital visitor experiences featuring never-before-seen videos, new photography, oral histories, and archival material, including Sarah Orne Jewett House Museum.

Historic New England is following all state, local, and CDC safety guidelines for South Berwick. Tour group size is limited. Due to small room size at the Sarah Orne Jewett House, masks are required for all staff and visitors at this time.

From south, I-95 to Maine Exit 3; from north, after the York tolls, take Exit 2. Follow Route 236 north 10 miles to South Berwick. At intersection with Route 4, turn right. House is in center of town, where Routes 236 and 4 divide.

Ample street parking on Portland and Main Streets. Municipal lot on Portland Street within short walking distance of the house. 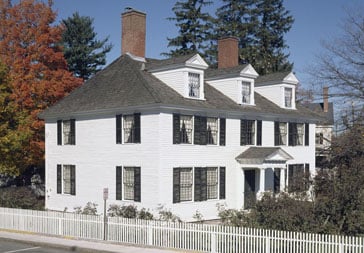 In the mid-eighteenth century, the area that became the town of South Berwick, Maine, was already an active community. The area was well-situated for early mills, with ready access to abundant timber supplies and rivers for water power and transportation. Tilly Haggens emigrated from Ireland to Berwick around 1740 and acquired a large tract of land in an area known as the Plains. As the name implies, the Plains was a relatively flat and fertile area about a mile north of the Salmon Falls River. Haggens’ land was framed by two early roads, one running from the river north into Berwick, today’s Main Street, and the other running east to Portland, today’s Portland Street. The two streets met at a wide intersection known simply as The Corner. It was at this location that Tilly Haggens’ son John, a successful merchant and veteran of the French and Indian War, constructed a fine Georgian house in 1774. Around 1800, Haggens added a new one-story kitchen to the north side of the house. Haggens and his family continued to live in the house until about 1819. 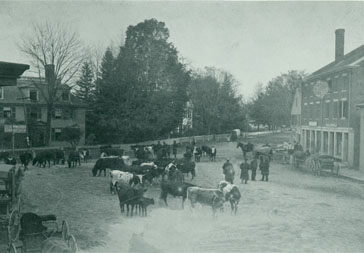 Captain Theodore F. Jewett, a merchant and ship owner, moved his family from Portsmouth, New Hampshire, to the Haggens house in South Berwick in the 1820s. It appears that Jewett rented the house for a number of years while the John Haggens estate was settled, finally purchasing it in 1839.

In 1848 Captain Jewett’s son, Doctor Theodore Herman Jewett, his wife Caroline, and their baby daughter Mary moved into the house with the Captain. Doctor Jewett began practicing medicine in town and a second daughter, Theodora Sarah Orne Jewett, was born in 1849. The young family continued to live with Captain Jewett until 1854, when a Greek Revival house was built next door for their use. Shortly after moving into the house, a third daughter, Caroline Augusta Jewett, was born.

Theodora Sarah Orne Jewett, named for her father and grandfather, but known to all as Sarah, would grow up to become one of Maine’s earliest and finest regional writers. Sarah became interested in writing early, publishing her first story, “Jenny Garrow’s Lover,” under the pen name A.C. Eliot in the Boston publication Flag of Our Union in 1868. The following year, at the age of twenty, she published her first story, “Mr. Bruce,” in the Atlantic Monthly, embarking on a long relationship with the journal, its editors, and the literary society of Boston and beyond. 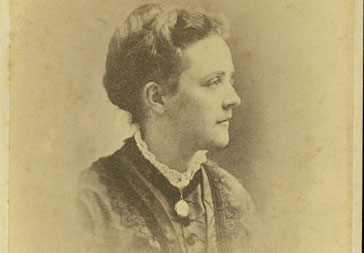 Her grandfather’s house was a constant in the life of Sarah Orne Jewett; she used the house as a setting for her first novel, Deephaven (1877):

“The rooms all have elaborate cornices, and the lower hall is very fine, with an archway dividing it, and panellings (sic) of sorts, and a great door at each end, through which the lilacs in front and the old pensioner plum-trees in the garden are seen exchanging bows and gestures.”

In 1887, Sarah (pictured) and her sister Mary inherited the house and moved in with their mother. Sarah’s younger sister, Caroline, and her husband Edwin Eastman, took ownership of the Greek Revival house next door.

Mary and Sarah decorated their grandfather’s house for their own use, expressing both a pride in their family’s past and their own independent, sophisticated tastes. While the sisters retained earlier wallpapers in four rooms, they made a dramatic statement in the Aesthetic style in the front hall, choosing a bold Arts and Crafts pattern of tulips on a reflective ground to complement a William Morris carpet in the “Wreath” pattern. By this time Sarah, 38 years old, was a successful author, at the center of a coterie of New England artists, and spending at least half the year at the Boston home of, or traveling with, her life partner Annie Adams Fields.

Annie Adams Fields, 1834-1815, was a poet, philanthropist, social reformer, and brilliant society hostess, with whom Sarah Orne Jewett shared a decades-long love relationship following the death of Annie Fields’ husband James T. Fields (of Ticknor and Fields, a major American publishing company of the nineteenth century). The Jewett-Fields relationship was one that allowed them both to pursue their careers while at the same time being fulfilling and mutually supportive. Spending summer months here, Sarah Orne Jewett devoted much of that time to her writing, producing as much as 20,000 words a day. Sarah chose her grandfather’s writing desk by the second floor hall window at which to work; from here, she could look out on the center of town, finding inspiration in its people for her characters and stories. Sarah also found inspiration in the natural world, whether gardening, walking with her dogs, canoeing, or riding her beloved horse Sheila. For Sarah, nature was also a refuge: as she wrote in a 1902 letter to Annie Fields: “I get such a hunted feeling like the last wild thing that is left in the fields.”

From an early age, as seen in her diaries, Sarah questioned the traditional female role in Victorian society. In her writing, a repeated theme emerges, that of independent heroines breaking out of confines, whether literal or figurative. Her 1884 A Country Doctor is a frankly feminist novel, asserting a woman’s right to have a career: “It counted nothing whether God had put this soul into a man’s body or a woman’s.” In 1896, she completed her masterpiece, The Country of the Pointed Firs, a work that shows her evolution. Here, the heroine has already broken free of societal barriers and is drawn into a deep and loving, though unlikely, friendship. Ultimately this love expands beyond the two main characters, to the larger human community.

In 1902, on her 53rd birthday, Sarah was thrown from a carriage. Her injuries effectively curtailing her productive writing, Sarah became a mentor to other writers, notably Willa Cather.

Sarah passed away at home in 1909. Since that time, her room has remained essentially unchanged.

Her sister Mary died in 1930, leaving the old family home to nephew Dr. Theodore Eastman. Eastman bequeathed the old Jewett house and the newer Greek Revival house, which he also owned, to Historic New England, then the Society for the Preservation of New England Antiquities, upon his own death just a year later in 1931. 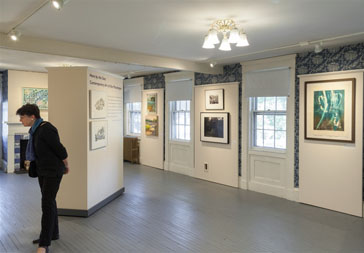 After Sarah Orne Jewett’s death in 1909, her bedroom was left as it was. The enshrinement of her bedroom and two small display cases of objects, assembled by Theodore Eastman, indicate the Jewett family had an interest in keeping Sarah’s memory alive and may have allowed visitors to see the house. Eastman’s subsequent gift of both Jewett houses to Historic New England supports this desire.

In its early years as a museum, Sarah Orne Jewett House was named the Sarah Orne Jewett Memorial and the Jewett-Eastman house next door became the Eastman Community House. Though Theodore Eastman left Jewett House to Historic New England, he did not leave its contents. The many books in the house were given to Harvard Library (Eastman’s alma mater) and the remaining contents were left to Eastman’s cousin, Mrs. H. H. Richardson of Boston. Some objects and furnishings stayed in the house, on loan or given to Historic New England by Mrs. Richardson, but others left the house. Furnishings were loaned from various interested parties, such as Elizabeth and Henry Vaughan of nearby Hamilton House, to help fill any missing gaps in the furnishing plan. In 1933 Harvard returned a number of books to the house on permanent loan.

From 1951 through the 1970s, visitors to Sarah Orne Jewett House were greeted by South Berwick native Elizabeth Hayes Goodwin (1895-1992). Miss Goodwin was hostess at Jewett House, giving tours several days a week during the summer months and serving as live-in caretaker from an apartment in the back ell. Goodwin, who had known Jewett when she was a girl, had a deep devotion to the house and to sharing it with the public. “For some lucky visitors…a tour of the house ends with tea in Miss Goodwin’s own living room, once the Jewett kitchen,” wrote Marie Donahue in a 1977 article for Down East Magazine. “There are several mementos given by the Jewetts to the Goodwin family, including, in a place of honor, a miniature yellow tea set which Miss Goodwin as a child received from Sarah.”

In 1972 Historic New England honored Miss Goodwin for her many years of service at the house by dedicating the breakfast room to her. A plaque still hangs in the room today alongside a portrait of Miss Goodwin by local portrait artist Al Brule.

A c. 1835 map shows landscape features are carefully recorded, including a rectangular plot labeled “Garden” near the 1774 dwelling. The house and garden may well date to the same time. Sarah Orne Jewett described the site as “an old plot of ground where several generations have been trying to make good things grow.” Until the 1900s Jewett preserved her venerable grounds in literature depicting “wide green yards and tall elm-trees to shade them.”

Young Jewett enjoyed red roses around her door and happily smuggled herself into her grandmother’s enclosed front yard for the crumpled petals of blush, white, and cinnamon roses that she used to make a delicious coddle. Jewett achieved fame as a writer early in life, treasuring the privacy and inspiration of what she christened “my own New England garden.” In 1887 Sarah and her sister Mary made a midlife move into their late grandfather’s colonial house and perfected the olden backyard plot.

Today visitors enter at the gate and see many heirlooms that Jewett described: peonies and roses in “great clusters…heavy with dew and perfume,” the London pride of midsummer “most gorgeous to behold,” white mallows and orange tiger lilies, and finally crimson cardinal flowers that “belong to the old nobility.” On the west side there is a collection of herbs mentioned in Jewett’s masterpiece, The Country of the Pointed Firs. On the east side grows the ancient shrub of “The White Rose Road.”