History along the Great Road

Arnold House is a rare surviving example of a stone-ender, a once-common building type featuring a massive chimney end wall. Built by Eleazer Arnold in 1693, the house features stone work that reflects the origins and skills of the settlers who emigrated from the western part of England. The house is a National Historic Landmark.

Arnold, a landowner with a wife and ten children, secured a license for a “Public House.” Tavern customers were probably served in the great room or hall of the house. The structure has sustained many alterations over the centuries. Tour Arnold House and see evidence of seventeenth-century construction methods, eighteenth-century additions, nineteenth-century graffiti, and the twentieth-century approach to preservation that restored the house to its present appearance.

Historic New England is following all state, local, and CDC safety guidelines for Lincoln, R.I. Tour group size is limited. At this time, masks are optional for all staff and visitors.

Tour involves standing, walking, and stairs. Visitors with limited mobility may be able to enjoy a first floor tour of the house and grounds. Folding chairs are provided for visitors who would like to use them while on tour. The site is not equipped with ramps, elevators, or lifts. Service animals are welcome. We are happy to work with you to make your visit an enjoyable one and we encourage visitors with questions or requests to call ahead.

There is a town-owned parking area west (left) of the Arnold House on Great Road. It is marked with a sign that reads “Gateway Park.”

The house was built in 1693 by Eleazer Arnold, a prominent Providence man who lived there year-round with his wife Eleanor Smith and ten children. 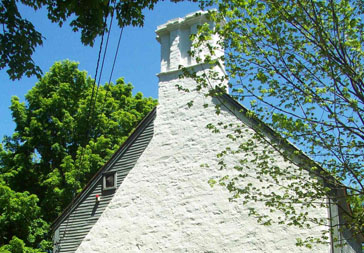 In 1685 Eleazer Arnold inherited the land on which Arnold House sits from his father Thomas. The area that is now known as Lincoln was originally part of Providence. The original purchasers of the town, including Thomas Arnold, were granted parcels of land in this northern portion of Providence. It was once thought that the house was built soon after Eleazer obtained the land, but dendrochronology has dated the house to 1693. The site he chose to build upon was close to the Great Road, the only road that connected this wilderness to Providence. By the time the house was built, Eleazer had been married Eleanor Smith for more than twenty years. They had ten children; in 1693 their ages ranged from twenty-one to younger than ten.

Eleazer Arnold was a very influential man within the community. He served on the Providence Town Council between 1684 and 1686. He served as a deputy of the General Assembly eight times between the years 1686 and 1715. He was also Justice of the Peace from 1705 to 1709. In 1710 he was granted license for a “Publick House.” Because the house was situated on the Great Road, the only traveled road between Providence and the growing villages between the rivers, it was a logical site for a tavern. Tavern customers were probably served in the great room or hall of the house.

In 1685 the surrounding area was heavily wooded. The house was one of few permanent structures in the area. Removed from the wooded areas were pockets of land along the river valleys which were rich in meadows for grazing livestock. The vast forests such as the nearby Quinsnicket Woods, now Lincoln Woods, were considered valuable hunting spots. The Moshassuck and the much larger Blackstone Rivers were used for fishing, and the numerous ponds and streams were invaluable water sources. The area at the head waters of the Moshassuck River was also found early on to be rich in lime deposits. Lime was quarried and burned at Lime Rock as early as the 1660s.

In this country, houses like Arnold House are known as “stone-enders,” a type that is unique to Rhode Island in the United States. It is a building form that can be traced back to Wales, Sussex, and the western counties of England, where building in stone was the tradition. It is thought that the early colonists of the area built their houses in the styles with which they were most familiar. Arnold House appears to be an adaptation of an English Tudor cottage, including the pilastered stonework of the Elizabethan-style chimney. This stone-end structure was built with local fieldstone and lime mortar, possibly from the nearby Lime Rock deposits.

These early stone-end structures were mostly built prior to 1700. They were typically one-and-a-half stories, containing a single room with a fireplace at one end and a garret above, usually used as a sleeping chamber; a good example is Historic New England’s nearby Clemence-Irons House. Arnold House is quite spacious by contrast; it has two stories, four rooms on the first floor (two heated), two on the second (one heated), and an attic illuminated with a large façade gable.

After Eleazer Arnold’s death, the house passed through generations of his descendants, never leaving the Arnold family until it was given to Historic New England in 1918. These later generations altered the house to suit their needs and changing lifestyles. During much of the nineteenth century, the house was inhabited by women who had been widowed by Arnold men or were unmarried Arnold daughters. The circumstances of the time meant that when women were heads of the house, those periods were more difficult and not as prosperous as when Arnold men were wealthy landowners.

Although industry played an important role in shaping the Blackstone and Moshassuck River Valleys, the Arnolds and their land were not dramatically affected by it. By the time of the Industrial Revolution, they were a well-established family with significant land holdings. At a time when mill villages surrounded them, they retained the integrity of their farmland. They did, however, take advantage of the situations that surrounded them and dabbled in industry. Mentioned throughout the land records that exist for Arnold House are the small business operations of the family over the years. At one point they owned a blacksmith shop and they used the power of the Moshassuck River to run their corn mill and corn distillery. A family member named Preserved Arnold was an investor in a cotton spinning mill in the nearby village of Albion and many generations of Arnolds had rights to the lime and lime kilns in several nearby locations. 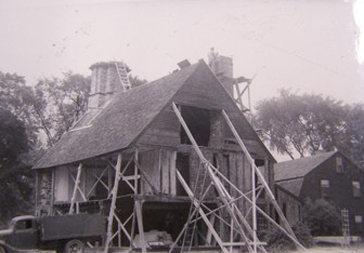 Could not find this in RS

In 1918, when the last generation of Arnold House inhabitants died without children, their great nieces and great nephews gave the house to the Society for the Preservation of New England Antiquities, now Historic New England, in memory of Sabra Arnold. At this time, the house and the tiny parcel of land on which it sits were separated from the remainder of the land, which was sold. Also in 1918, Croade Tavern (c. 1700), the last survivor of Joseph Jencks’ original settlement in what is now the downtown of Pawtucket, Rhode Island, was relocated to the property at the rear of the house for use as a residence.

Two phases of restoration have taken place since 1918. The first phase was overseen by Norman M. Isham, a pioneer of architectural restoration, in 1920. This phase proved to be one of exploration and stabilization of the structure. The second phase of restoration began in 1950. What began as the complete structural rehabilitation of the house and chimney resulted in the restoration of the house to its seventeenth-century appearance. Most of the later alterations to the house were removed, including the rear lean-to, later fireplaces that had been built into the original hearths, brick ovens, and room partitions.

The resulting configuration after years of evolution and restoration is a two-story house with a stone chimney mass occupying most of the west wall and a small later chimney on the east wall. The later alterations that remain include the addition to the second floor that occurred when the roof was raised to allow for the full two stories and the staircase that was part of the rear lean-to.

During the 1950s restoration, several early alterations were replaced with recreations of what was thought to have existed in the seventeenth century. The double-hung sash windows have been replaced by smaller casements with leaded glass panes. The Federal-style paneled front door and door surround were replaced with the batten board door in the house today. Much of the fabric of the house has been reconstructed over the years.

Today Arnold House is open seasonally and hosts a popular birthday celebration for President Lincoln, after whom the town was named.

More things to do in Lincoln

Lincoln, a small inland town, sits at the southern end of the Blackstone River Valley National Heritage Corridor, one hour southwest of Boston and fifteen minutes west of Providence. The town of Lincoln, once part of Smithfield, Rhode Island, was contained in the Loquasquaset Purchase of 1636. It was not until 1871 that the town of Smithfield was divided into two sections that the town of Lincoln was born. The Lincoln area was the site for one of the first industries in the nation, the mining of lime, which began in the 1640s. By the late 1800s Lincoln became an important mill town due to its proximity to the Blackstone River. Today, the Great Road is a historic district, with historic houses, farms, and mills lining the way.

Expand your visit to Lincoln and visit Hearthside, one of the finest examples of early nineteenth-century Federal-style houses in the state. On weekends visitors can experience blacksmith demonstrations at the Hannaway Blacksmith Shop, located next to Hearthside. To experience the outdoors, visit Lincoln Woods State Park, with swimming at the freshwater beach, fishing, hiking, jogging, and horseback riding.