Experience tranquility in the Berkshires

William and Elizabeth Doane purchased this handsome house in 1875 as their summer retreat. They named it “Tranquility,” as it overlooks a peaceful bend in the Housatonic River. During this period, Stockbridge, in the heart of the Berkshires, became a popular summer destination for New Yorkers like the Doanes. In 1900 they added a Shingle Style wing that wrapped around the back of the house and included a capacious porch overlooking the river.

The Doanes and their daughter, Vipont Merwin, traveled extensively, collecting European and American furnishings and objects to decorate their home. Merwin House today is both a museum of the family’s collection and the location of the Berkshires office of the Housatonic Valley Association, dedicated to protecting the Housatonic watershed.

Historic New England is following all state, local, and CDC safety guidelines for Stockbridge. Tour group size is limited. At this time, masks are required for all staff and visitors.

Take I-90 to Exit 10. Follow Route 102 west to Stockbridge. Merwin House is the seventh house on the left after the Red Lion Inn.

There is limited parking available in the Merwin House driveway. Street parking is available. 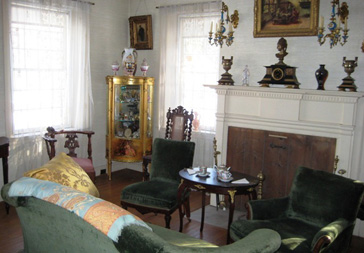 The titles for this plot of land date back to at least 1781. The land passed through a succession of owners from 1781 until 1825, belonging at different times to a yeoman, a merchant, a goldsmith, and a cordwainer. The locations of any earlier houses built on the property remain unknown. Around 1825, Francis and Clarissa Dresser built the late Federal-style house that exists today. Clarissa Dowd Dresser was from Madison, Connecticut, and moved to South Lee, Massachusetts, in 1832 to teach school. Francis Dresser passed away only fifteen years after marrying Clarissa, leaving her with four small children to raise. Little is known about her later life in the house. As the nineteenth century progressed, the community around the house was changing rapidly.

With the introduction of the railroad in the 1850s, Stockbridge transformed from a quiet, rural community to a leisure destination for wealthy New Yorkers looking to escape the noise and congestion of the city. 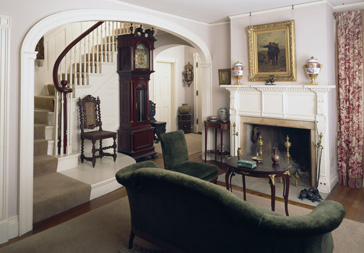 Summer Retreat in the Berkshires

The period following the Civil War through World War I saw the Gilded Age reach the Berkshires. Artists, writers, financiers, and industrialists flocked to the rural hills of western Massachusetts for seasonal escapes. During this time, Stockbridge flourished; elaborate summer mansions were built and residents and visitors were entertained by a golf course, casino, and other cultural attractions.

In 1875 William and Elizabeth Doane, wealthy New Yorkers, purchased Merwin House from the Dresser family to use as a summer retreat. As the Doane family grew to include two young daughters, Vipont and Elizabeth, they added a Shingle Style ell addition to the original brick structure and significantly renovated the Federal interior of the house in 1900. The additional space and updated interiors created a more comfortable summer retreat for the Doane family. After William Doane passed away in 1923, Elizabeth and their daughter Vipont continued to summer at the house. 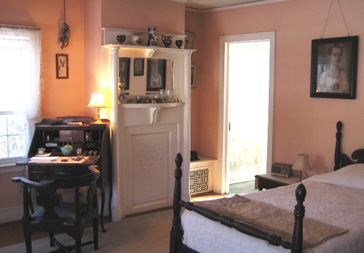 Vipont married three times during her life. Her first husband, Ensign Newman Perry, died tragically in an accident while serving in the Navy in 1905, just two years after their wedding. In 1909 Vipont married Edward Webb, but their nine-year marriage was apparently never publicized until they divorced in 1918. In 1923, the same year William Doane passed away, Vipont married Edward Payson Merwin, a New York stockbroker with family roots in North Carolina.

Elizabeth Doane passed away in 1932. At that time her daughter Vipont and Edward Merwin decided to live in the house on a more permanent basis. After the sudden death of Edward Merwin in 1936, Vipont Merwin continued to live in the house for nearly thirty years. She lived there with two servants, Catherine and Albert Martinengo. The Martinengos became Vipont’s close friends and companions during these years. Vipont Merwin passed away in 1965 and is buried in the family plot in Stockbridge.

Becoming a Museum: An Example of American Culture

Historic New England acquired Merwin House in 1966, shortly after the death of Marie Vipont deRiviere Doane Merwin, known as Vipont. It was her desire to leave Merwin House as a museum, as her will states, “as an example of an American culture which is fast becoming extinct.”

More things to do in Stockbridge

Stockbridge is a cozy town nestled in the Berkshire Hills of western Massachusetts. The area’s scenic beauty and vibrant arts and culture scene have attracted vacationers and day trippers for more than a hundred years. Home to Tanglewood, the summer home of the Boston Symphony Orchestra; the Norman Rockwell Museum; the Kripalu Yoga Center; and The Mount, Edith Wharton’s Home, along with a number of other museums, galleries, shops, and eateries, the Berkshires offers visitors an array of things to do in a simply beautiful setting. As Norman Rockwell once said, “Stockbridge is the best of America, the best of New England.”

Contact the Stockbridge Chamber of Commerce for a listing of restaurants, lodging, and shops in the area.