Merchant James Rundlet and his wife Jane built their home on a terraced rise and filled it with the finest furnishings available. It was both an urban showplace and home for the Rundlets’ large family. Rundlet-May House shows four generations of family possessions, ranging from original 1807 wallcoverings and furniture to twentieth-century additions by the Rundlets’ great-grandchildren.

James Rundlet equipped his home with the latest technologies. The kitchen boasts both a Rumford roaster and a Rumford range, as well as a set kettle and an elaborate venting system that services a smoke room on the third floor. There is an early coal-fired central heating system and an indoor well. The gardens retain their original layout with plantings that were popular during the Colonial Revival period.

Historic New England is following all state, local, and CDC safety guidelines for Portsmouth. Tour group size is limited. At this time, masks are optional for all staff and visitors.

Tour involves standing, walking, and stairs. Visitors with limited mobility may be able to enjoy a first floor tour of the house and grounds. Visitors can access a virtual tour of the museum from their own digital device onsite. Folding chairs are provided for visitors who would like to use them while on tour. The site is not equipped with ramps, elevators, or lifts. Service animals are welcome. We are happy to work with you to make your visit an enjoyable one and we encourage visitors with questions or requests to call ahead.

Take I-95 to Exit 7 toward downtown (Market Street). Bear right after the railroad tracks. Turn right onto Deer Street. Turn left onto Maplewood Avenue. In three blocks, follow the right curve onto Middle Street. Rundlet-May House is three blocks down on the right.

There is ample street parking on Middle Street.

C&J Trailways provides bus service from Boston and the North Shore to Portsmouth. The Coast Bus can be used to travel within the Seacoast area. 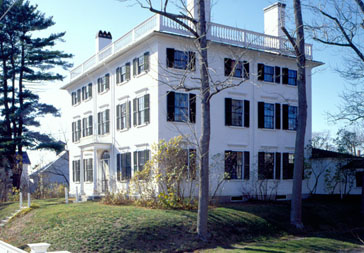 Records abound from the planning and construction of Rundlet-May House. The archive of material includes a building schedule, bills paid to workmen for materials, and other accounts. The records fall into two major categories: labor and materials. The accounts even show how much was spent on rum for the workmen: $186.75. The latter gives us a full picture of the house’s construction from start to finish, including the plan for the landscape. James Rundlet chooses pear and poplar trees, grapevines, and rose bushes for his extensive garden. These records allow us to reconstruct the cost of material and labor to build a fine house in the Federal Period.

Perhaps the most persistent question is who designed the house. There is no record of design plans or the individual responsible. However Rundlet’s personal interest in buildings is evidenced by the books in his library, the fact that he designed at least one shop facade, purchased drawing paper in 1807 (the year before construction began), and sold builders’ guides in 1809 when his family was nicely settled in their new home. These pieces of evidence lead historians to believe that Rundlet may well have designed the house himself. 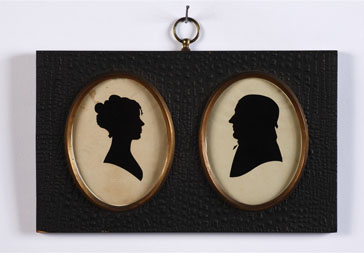 James Rundlet built his house at age thirty-five. He married Jane Hill Rundlet, with whom he had thirteen children, seven of which were born before the family moved to the new house in 1808. James Rundlet was a native of Exeter, New Hampshire, and the son of a yeoman farmer. He attended the newly formed Phillips Academy in Exeter at age twelve. He moved to Portsmouth in 1794 to become a businessman and made a fortune as a merchant and manufacturer. Upon his arrival in Portsmouth in 1794, Rundlet tried his hand at the dry goods trade and eventually focused on textiles. Invoices surviving from 1802 detail the overwhelming variety of fabrics that were purchased and sold by Rundlet. They include fine velveteen and lace and also more common fabrics like flannel and baize. Rundlet operated a textile shop in downtown Portsmouth, where another import shop still operates today. Rundlet did not engage in the shipping aspect of trade, owning two ships for only two years in 1814 and 1815.

The War of 1812 proved a boon for James Rundlet. Like many New England merchants, the scarcity of British products and resulting higher prices proved profitable for the merchant, who sold to a largely New England-based clientele. Perhaps most notable is that Rundlet was awarded the contract to provide the United States government with cloth to make soldiers’ uniforms. After beginning his career in sales, the War of 1812 turned Rundlet into a successful manufacturer. In the years during the War of 1812, Rundlet earned between $15,000 and $18,000 per year, a significant portion of his vast wealth.

In 1814, he was instrumental in the development of a woolen mill in Amesbury, Massachusetts. The Amesbury mill produced both cloth for the Army and for commercial use. In this endeavor, Rundlet worked with John Langdon Jr., the nephew of New Hampshire Governor John Langdon. Rundlet even describes the product in his diary: “these worthinetts are an article of my own manufacture and are an excellent article for Gentlemen’s summer coats and trousers, or for childrens wear, being very light and cool yet having the appearance of a mixt cassimere at a little distance…” In 1817 President Madison honored Rundlet with a visit and, according to Rundlet, he was “very much pleased with the whole establishment, particularly so… with the quality of the wool.”

By 1823 Rundlet turned his attention to the tiny village of Salmon Falls, now Rollinsford, New Hampshire, and established a woolen mill there.

By age forty-seven Rundlet had steadily turned his profits into investments, rather than continue active trade. This was a common trend for businessmen in the Northeast during the early nineteenth century. Rundlet owned many small house lots throughout Portsmouth in addition to his home and three shops. He maintained approximately one third of his income in real estate. He also invested in banks. James Rundlet was the tenth highest taxpayer in Portsmouth in 1815. The money he amassed in the early nineteenth century kept him at the top of the tax bracket until his death in 1852.

Rundlet was up on the latest in heating and cooking technologies, which is amply demonstrated in his house. The kitchen was fitted with a complete Rumford range and roaster. Benjamin Thompson, known as Count Rumford, revolutionized the way we heat and cook, and James Rundlet was one of the first Americans to test his inventions. Rundlet also included a scullery in which he ordered a set-kettle for boiling large quantities of water. The house was equipped with three different water sources. Rundlet’s was one of the few private homes to hook into the Portsmouth aqueduct system, which proved unreliable. To ensure access to fresh water, Rundlet also had an attached well-house and a large cistern that collected rain water in the basement. By the 1830s, the Rundlet family enjoyed a forced hot air heating system. The attached outbuilding complex housed farm animals, possibly workers’ quarters, potting sheds, and other spaces used for supporting the large Rundlet family. The house and grounds were self-sufficient and able to support the family and their staff with little help from the outside.

James Rundlet adorned his house with imported English wallpapers. The peach damask pattern he chose for the parlor remains on the walls today. During his lifetime, James Rundlet amassed a fortune, resources his family lived on for generations. 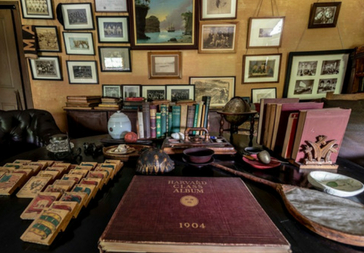 Louisa Catherine Rundlet, a younger daughter, married Hartford-born Savannah merchant George May in 1840. After George May’s early death in 1858, Louisa Catherine May returned to her childhood home with her own two children. Her twins, James and Jane May, named for her parents, grew up in Rundlet-May House. Portraits of Louisa and George, and many of George’s family, are displayed in the house.

Louisa’s brother, Dr. Edward Rundlet, also stayed in the house, running his medical practice from home. Like his father, Edward attended Phillips Academy in Exeter. He received his medical degree from Harvard University in 1829. It is possible that he conducted his practice in the back parlor, most recently used as a dining room, which is accessible by a semi-private entrance. There is some evidence that Edward also engaged in merchant activities, but spent most of his long life practicing medicine from his father’s home.

The eldest two girls, Harriet and Caroline, never married and never left their childhood home. In 1830, at ages thirty-five and thirty-two respectively, they and their father were described:

And just by the Bank, I see two wending this way,

They are both very Beauteous, and seem very gay;

Oh: tis Caro and Harriet who bloom up in town, 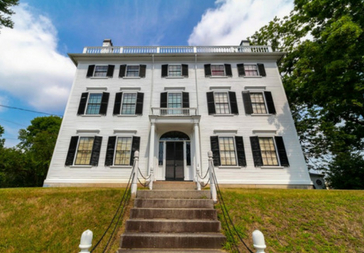 James Rundlet May, son of Louisa Catherine May, never left his childhood home. Like his Uncle Edward, James was a doctor, practicing out of the family home. During his and his wife Mary Ann’s occupancy, the house changed little. The Mays updated carpets and upholstery, but their mark is most noticed in the garden. James created a graveyard for the family’s many pets on the south edge of the property. Mary Ann, while maintaining James Rundlet’s original pathways and flower beds, updated some of the flower varieties by adding the peonies, tiger lilies, pinks, and roses popular with her generation. She also added the spiral trellises that remain on the grounds today. 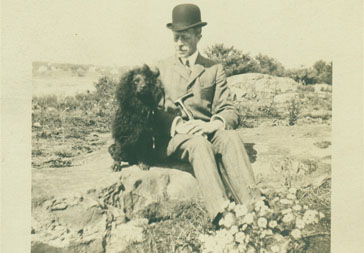 Ralph and Gladys May

Ralph May (pictured) and his wife Gladys used Rundlet-May House as a summer retreat for much of their occupancy. In keeping with the Colonial Revival trend, the couple embraced their family history and decorated the home with James Rundlet’s furniture, family portraits, and decorative arts. They kept the peach damask wallpaper hung by James Rundlet when the house was built. Ralph, who was born in his mother’s childhood home, which had since become the Portsmouth Historical Society, was a dedicated scholar who wrote many short poems, essays, and histories of his hometown. 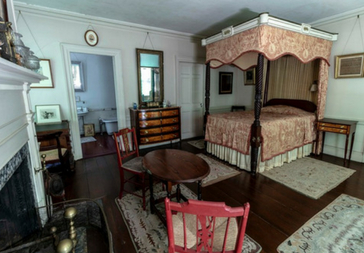 Rundlet-May House represents four generations of one family, the Rundlets and Mays, who continuously occupied the space. Visitors to the site see James Rundlet’s Rumford roaster next to Ralph May’s General Electric range, and an eighteenth-century inkwell above a cable television outlet. The contents of the house reflect the changing aesthetics and values of four generations. The house challenges us to identify the changes, both technological and decorative, and develop an understanding of when and why they occurred.

Portrait of Louisa Catherine Rundlet May

Visit nearby Jackson House in Portsmouth.

Visit nearby Langdon House in Portsmouth.

More things to do in Portsmouth

Portsmouth, a small coastal city, sits at the mouth of the powerful Piscataqua River and is the hub of the Seacoast region. Settled in 1623, Portsmouth boasts many restaurants and bars, history museums, music and theater venues, waterfront attractions, recreational and nature activities, and much more. In 2008 the National Trust for Historic Preservation listed Portsmouth as one of its Dozen Distinctive Destinations, citing the city as “one of the most culturally rich destinations in the country.” Located less than one hour north of Boston and one hour south of Portland, Maine, the Seacoast is easily accessible.

Expand your visit to Portsmouth and visit Prescott Park to experience outdoor waterfront theater and music, the Seacoast Science Center to gain a greater understanding of the ocean ecosystem, or the renowned Music Hall for world class entertainment.

Contact the Portsmouth Chamber of Commerce for listings of restaurants and lodging, and many more local activities.