Framed by dense woods and set in rolling hills overlooking a pristine section of the Kennebec River, the 1762 Bowman House is a rare survivor of domestic eighteenth-century elegance in a rural setting. Lawyer and later Judge Jonathan Bowman built the stylish house and furnished it with exquisite Boston-made furniture, Chinese export porcelain, and imported silver and glassware, creating a world of beauty and elegance far away from the rough reality and challenges of life on the Maine frontier.

In 1965, after decades of being empty, the house was saved by designer, historic preservationist, and entrepreneur Bill Waters and his partner, Cyrus Pinkham. The interior is a recreation of Bowman’s world, including objects original to the house and family pieces collected by Waters over his fifty years of stewardship.

Historic New England is following all state, local, and CDC safety guidelines for Dresden.  Tour group size is limited. At this time, masks are optional for all staff and visitors.

Available in front of the house

In the eighteenth century Bowman House overlooked a busy, commercial riverfront. That scene is now an expansive lawn overlooking a serene section of the Kennebec River. 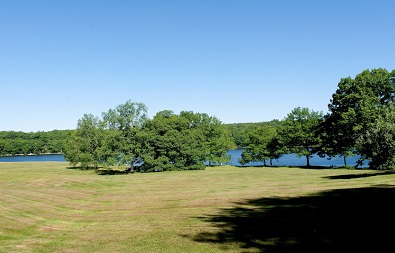 Land of the Wabanaki

The land on which Bowman House sits was home to Wabanaki people for more than 12,000 years. The Wabanaki traveled locally and seasonally, planting crops; harvesting fish from the river; and hunting. By 1758, the Indigenous people were forced out after years of violent conflict and disease brought by European colonists. Pownalborough, established in 1761, became the county seat amid growing communities and a river busy with international shipping. 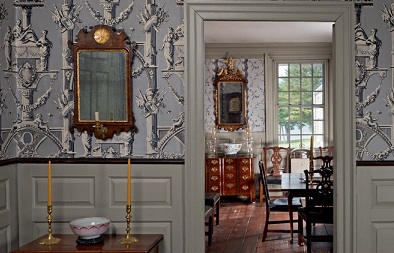 Jonathan Bowman was born in 1735 in Dorchester, Massachusetts, to the Reverend Jonathan Bowman and his wife, Elizabeth Hancock Bowman. Jonathan’s uncle Thomas Hancock was the richest merchant in pre-Revolutionary War Boston. Thomas helped Bowman go to Harvard, where his classmates included John Adams, John Wentworth (later Governor of New Hampshire), and two men who would be his neighbors in Maine: Charles Cushing (later Sheriff of Lincoln County) and Jacob Bailey.

In 1760, Jonathan Bowman was sent to Maine to represent family financial interests. Thomas Hancock was a member of the Kennebec Proprietors, the Boston investment group that held title to a vast acreage of land on both sides of the Kennebec River in Maine. They believed the area was ripe for growth as a shipping hub and legal center. Uncle Thomas had Bowman appointed Clerk of Courts, Probate Clerk, and Register of Deeds for the new community of Pownalborough.

In 1762, Bowman hired Boston architect Gershom Flagg, builder of the nearby courthouse, to build him a house commensurate with his status.

Larger and more imposing than most of the houses nearby, the architectural style of the house is unadorned Georgian. Bowman furnished it with exquisite Chippendale-style furniture, Chinese export porcelain, and imported silver and glassware, creating a world of beauty and elegance far away from the rough reality and challenges of life on the Maine frontier. Receipts show that he continued buying for the house right up to his death.

In 1770, Jonathan Bowman married Mary Lowell Emerson, the widow of a ship captain. The family soon grew to include three sons and a daughter. By then, Bowman was Judge of the Courts and Probate, and a power behind most of what went on in the region. He had also grown his participation in shipping, including owning all or part of at least seven international trading ships.

Bowman had at least three Black servants, named Cicero, Boston, and Dinah. The documentation for Cicero and Boston suggests that they were both enslaved by Bowman. Cicero appears in accounts of expenses for medical treatment, shoes, and billing for his labor on a ship. He ran away from Bowman in 1775 to go to Cambridge, probably to join the Continental Army. Reuben Colburn, the man who sold Benedict Arnold shoddy bateaux for the ill-fated Quebec venture that same year, was hired to bring Cicero back. Boston appears in accounting of labor hours for ship work, and might be the same Boston who ran away from his owner in Connecticut in 1770 using false papers. Dinah appears in 1787 accounting from Bowman’s first cousin John Hancock for her board in Boston while the Bowmans’ daughter Mary was attending school there.

The Revolutionary War was a bitter civil war in Pownalborough, with roots in religious feuds as well as politics. Bowman and Cushing were descendants of seventeenth-century Puritan immigrants. Both were staunch Congregationalists who did not want the Anglican church in their community. Their former classmate Anglican Rev. Jacob Bailey was controlled by his patron, the wealthy Sylvester Gardiner.

Gardiner made enemies of Thomas and John Hancock when he used fraudulent legal methods to try to claim land they owned. His machinations ensured that Jonathan Bowman would become an even greater foe. Gardiner and Bailey were Tories. Bowman and (now Sheriff) Cushing, both patriots, became leaders of the Committee of Safety. After Bailey refused to read the Declaration of Independence to his congregation, local fighting intensified. Gardiner and Bailey were forced to flee to Canada. Bowman and Cushing remained in positions of power, with their prewar wealth intact.

Sylvester Gardiner wrote the only known contemporary description of Jonathan Bowman, describing him as tall and striking in appearance, with strong features and silver hair. He particularly noted Bowman’s clothing, described as a full black suit with silk stockings and large glittering shoe buckles.

Mary Bowman died in 1785. In 1798, sixty-three-year-old Bowman married thirty-three-year-old Nancy Goodwin, of the neighboring courthouse family. A condolence letter from Bowman to Nancy on the death of her brother Charles in 1790 shows a friendship well before their marriage. Jonathan Bowman died in 1804. Nancy outlived him by fifty-two years, and it is through her family descendants that Bowman furniture, objects, accounts, and correspondence were saved. 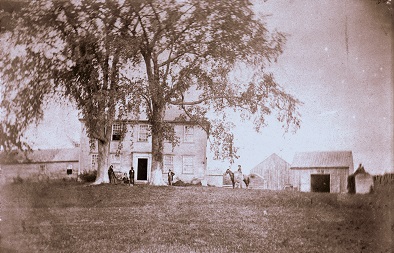 After his father’s death, Thomas Bowman sold the property to James and Joanna Carney. Born in Maine around 1775, James Carney apprenticed in Boston before opening his own blacksmith shop in Newcastle, Maine, when he was in his early twenties.

The Carneys married in 1799. Joanna (Marson) Carney was the daughter of a Dresden ship captain. They lived in Boston, where James ran a grocery store with his brother at the corner of Washington and Dover Streets. With his family getting sick from polluted Boston water and the sudden availability of Bowman House, Carney decided to move back to Dresden and buy the property. He added several new barns and a blacksmith’s shop. The business was very successful thanks to iron work done for local shipbuilders. In 1811, Carney built the brig Dresden, 181.01 tons, at his landing on the Kennebec River near his home.

James and Joanna had twelve children, all of whom lived to adulthood. The Carneys were active in the community through the Universalist Church and known for their charitable works. These included hosting a memorable town Fourth of July celebration in 1807. James Carney died in 1858. The Carney Cemetery is adjacent to the Bowman Cemetery just down the road.

In 1861, James Carney Jr. sold the farm to Daniel and Betsy Tiffany, who continued to run it for nine years. 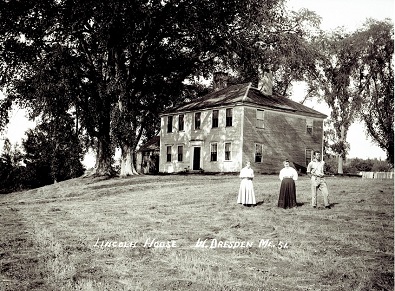 In 1870, the property was purchased by the Lincoln Ice Company, one of many on the Kennebec River at a time when international demand was high for Maine ice. Bowman House became offices and manager housing for the company. You can still see cleat marks from the workers’ shoes on the stairs and ground floors of the house.

The industry brought a brief period of prosperity to midcoast Maine until it was superseded by refrigeration. These were the last years of the ice industry, and the company went through three different iterations of ownership before closing in 1910. 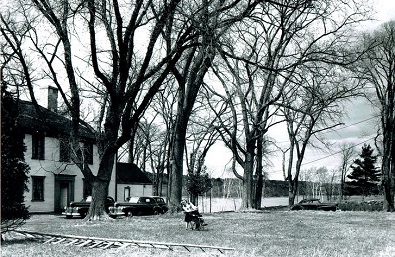 From 1911 to 1961, the property was bought and sold by four different people, each time for one dollar. Each owner was involved in historic preservation in the area, and their intent seems to have been to preserve the property until the right buyer could be found to save it. A 1937 Historic American Building Survey (HABS) report documents the house then, virtually empty and rough, but intact.

In 1961, the daughters of Maine’s first State Historian, Madeline and Mildred Burrage, both artists and historic preservationists, bought the house. They completed some well-documented repairs and found the perfect buyers. 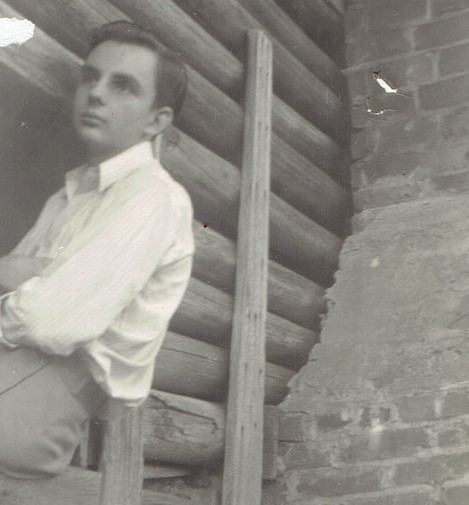 In 1965, designer, historic preservationist, and entrepreneur Bill Waters and his partner, Cyrus Pinkham, purchased Bowman House. In 1971, they had the house listed on the National Register of Historic Places, established an endowment, and gave the house to Historic New England with a life tenancy for themselves.

Born in 1926, Bill Waters grew up in a wealthy, socially prominent family in Blakely, Georgia. Bill was first exposed to eighteenth-century antiques in the home of his aunt Agnes Smith. He studied art and, after a brief stint in college, moved to Atlanta and worked as a window dresser for high-end Rich’s department store.

Inspired by his friend Eleanor Pitman, a fellow window dresser at Rich’s, Bill moved to New York City in 1947. He got a job as a sketcher and designer for fashion magnate Hattie Carnegie. At her salon, he watched as fashion icons including Coco Chanel and Wallis Simpson, the Duchess of Windsor, came to shop.

In 1950, Bill and Cyrus moved to Maine to help run Margaret Smith Company, a handbag company created by Cyrus’s sister that had become a runaway success. Through Bill’s designs and connections, the handbags became a fashion necessity sold in specialty stores and at Bonwit Teller through the 1970s.

They lived in a c. 1800 house in Damariscotta, Maine, that triggered Bill’s passion for historic preservation. He developed a network of experts in the museum and preservation fields who became trusted consultants and friends. He loved tracking down Bowman and other Maine pieces. In the late 1970s, Bill opened Lilac Cottage Antiques in Wiscasset, which he ran until his death in 2016.

Find out about group tours, restroom, photography policy, and more.

Visit nearby Castle Tucker in Wiscasset.

Visit nearby Nickels-Sortwell House in Wiscasset.

Become a member of Historic New England and tour for free.

More things to do in Dresden

Dresden is located between the Kennebec and Eastern Rivers in interior mid-coast Maine. Incorporated in 1761, Dresden was established to be the legal center and shipping hub of the growing new community of Pownalborough. The Boston-based investment group the Kennebec Proprietors built a large courthouse and marketed the town to European immigrants as a civilized place to settle and thrive. The prosperity never happened.

Formerly the site of shipping and ice industries, the Kennebec River today is beautiful, peaceful, and unspoiled. The town and its companion village, Dresden Mills, remain rural communities, with farms and eighteenth and nineteenth-century houses dotting the landscape. Local organic farm stores include Goranson Farm, Bridge Farm, and Dragonfly Farm. Dresden is close to Wiscasset and Bath. Visit the Lincoln County, Maine, website for more information.