Book Series: Historic New England launched the book series in 2006 to introduce our collections to a wider audience. Drawing on the rich resources of our archival and object collections, these thoroughly researched, beautifully designed, and heavily illustrated publications enrich our knowledge of New England and the wider world. To order your copy of any Historic New England book, please call 617-994-5925, or look for them in our museum shops. Members save 10%. 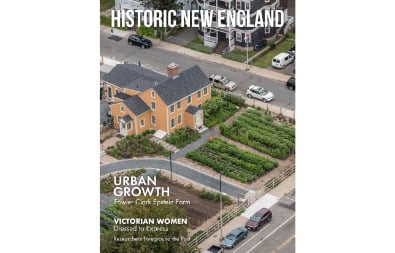 Cover story: The Fowler Clark Epstein Farm in the Mattapan section of Boston, once part of a 330-acre, 18th-century agrarian estate, is now a successful small-scale urban farming operation, transformed through preservation and adaptive reuse by the non-profit redevelopment organization Historic Boston Incorporated. This issue also features late-nineteenth-century women’s fashion; the story of Sarah Moore Field and her family home, Field-Hodges House, in North Andover, Mass.; women woodworkers; and the role that Joshua Coffin played in freeing captives of the “Amistad” in 1839-1840. 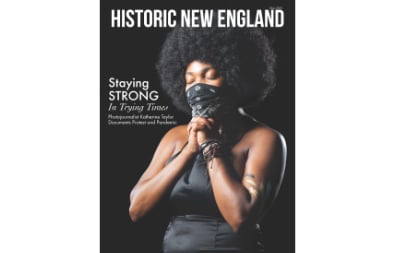 Cover Story: Acquisition of several images by photojournalist Katherine Taylor documenting New Englanders’ responses to the COVID-19 pandemic and protests against systemic racism. This issue also features an introduction to Historic New England’s multiphase project, Recovering New England’s Voices; how the mail-order kit houses boom in the mid-twentieth century created an affordable living trend; preservation strategies and policies anyone can use to save historic buildings; and Otis House’s continued presence in Boston’s West End neighborhood through centuries of change and urban renewal. 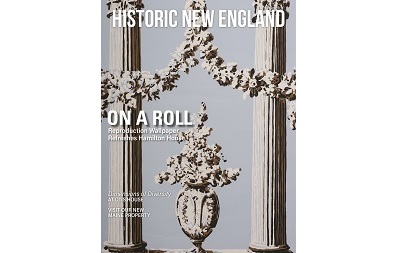 Cover Story: Reproduction of the pillar and arch wallpaper at Hamilton House in South Berwick, Maine, refreshes the property’s historic decor. This issue also features exterior restoration work at Hamilton House; Historic New England’s western Massachusetts presence in partnership with Greenagers and the Appalachian Trail Conservancy; the permanent Dimensions of Diversity exhibition at Otis House in Boston; and a Burlington, Vermont, archaeological discovery of burials from the War of 1812. 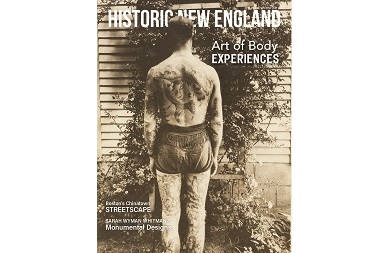 The cover image of a man with full-body tattoo introduces an article about the early twentieth-century history of body art. This issue also features images representing Historic New England’s A Time to Remember COVID-19 crowd-sourced collection project; a photo essay documenting the changing streetscapes and gentrification of Boston’s Chinatown; and articles about the Wabanaki Confederacy’s response to European settler encroachment in the region; slavery in New England and at the Codman Estate, a Historic New England property in Lincoln, Mass.; and the 1817 founding of the American School for the Deaf in Connecticut. 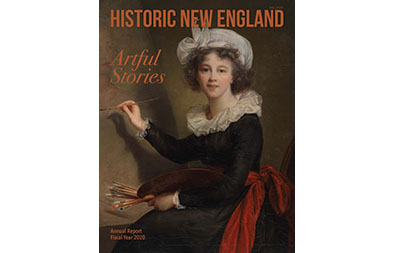 This issue is devoted to the exhibition Artful Stories: Paintings from Historic New England, on view at the Eustis Estate in Milton, Mass. It features stories on New England’s women artists, collectors, and patrons; nineteenth-century itinerant painters; Edward Mitchell Bannister, a Black artist in the nineteenth century; paintings of architecture and landscape; men’s clothing in portraits; and the structure of paintings.  It also includes Historic New England’s FY20 annual report. 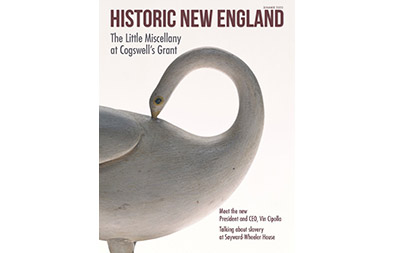 Historic New England’s newly appointed President/CEO Vin Cipolla shares his thoughts on how the organization can best serve the public and why preservation is an essential part of the region’s future. This issue also explores the material culture collection created by Bertram K. and Nina Fletcher Little; the role the Lyman Estate in Waltham, Massachusetts, in the movie Little Women; the untold story of slavery at Sayward-Wheeler House in York Harbor, Maine; a citizens’ advocacy guide for saving historic places, such as Clinton African Methodist Episcopal Zion Church in Great Barrington, Massachusetts, which is associated with W. E. B. Du Bois; the partnership with The History Project in researching the life of Henry Davis Sleeper, a gay man, who created Beauport, the Sleeper-McCann House in Gloucester, Massachusetts; the domestic architecture of Eleanor Raymond. 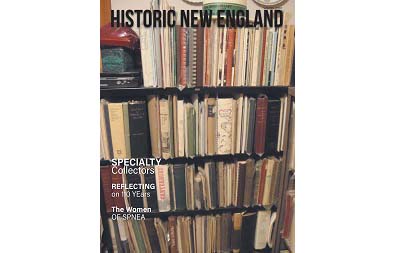 Learn about the three recipients of Historic New England’s Prize for Collecting Works on Paper. This issue also looks at some of the conservation preparations for the exhibition Artful Stories: Paintings from Historic New England. Other feature articles include the guest books that economist A. Piatt Andrew used to record visitors to his home, Red Roof, in Gloucester, Mass. Andrew (1873-1936) served as assistant secretary of the U.S. Treasury from 1910-1912, was the founder and director of the American Ambulance Field Service during World War I, and was a Massachusetts congressman from 1921 until his death. He was a close friend and neighbor of interior designer Henry Davis Sleeper. Also, read about the leadership role that women played in the early years of Historic New England, when it was known as the Society for the Preservation of New England Antiquities; and view images of iconic architecture from the professional portfolio of photographer Steve Rosenthal.

Everything for the Garden

Visit the Library and Archives in Boston.

See the winners of the Historic New England Book Prize.