In 1936 Mary Thacher had Winslow Crocker House moved six miles down the Old King’s Highway. Over ten months, the house was taken apart, beam by beam, and reassembled next door to her ancestral home in Yarmouth Port. She remodeled the interior to provide an attractive backdrop to the significant collection of antique furniture she built over her lifetime.

For a house built in eighteenth-century Cape Cod, Winslow Crocker House is surprisingly elaborate, with rich paneling in every room. Learn about Miss Thacher’s ambitious relocating and remodeling. The result of her efforts is a colonial Cape Cod house with a twentieth-century flavor. Miss Thacher’s impressive collection of furniture is a thorough survey of early American styles (Jacobean, William and Mary, Queen Anne, Chippendale) and is accented by colorful hooked rugs, ceramics, and pewter.

Historic New England is following all state, local, and CDC safety guidelines for Cape Cod. Tour group size is limited. At this time, masks are optional for staff and visitors.

Tour involves standing, walking, and stairs. Visitors with limited mobility may be able to enjoy a first floor tour of the house and grounds and a second floor visual tour is available. Folding chairs are provided for visitors who would like to use them while on tour. The site is not equipped with ramps, elevators, or lifts. Service animals are welcome. We are happy to work with you to make your visit an enjoyable one and we encourage visitors with questions or requests to call ahead.

Visitor parking is available in the driveway and there is street parking along Strawberry Lane, just east of the Winslow Crocker House off of Route 6A.

The house was built in West Barnstable c. 1780 by Winslow Crocker, a trader and land speculator. The interior is elaborate for Cape Cod at the time. 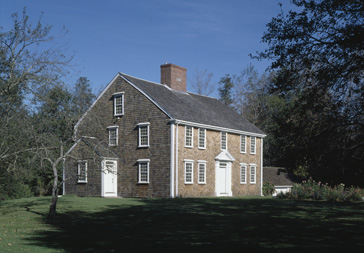 This Georgian-style house was built in West Barnstable c. 1780 by Winslow Crocker, a trader and land speculator. Winslow Crocker joined the American navy when the Revolutionary War began, and was serving on a privateer in 1777 when his ship was captured by the British. He was imprisoned in Nova Scotia, but was later exchanged for British prisoners and allowed to return home. He became a merchant and built this home for his family. There is speculation that he may have been a rum runner, a common occupation for those involved in trading at this time. Little is known about his later life because a courthouse fire destroyed many local records in the nineteenth century. When Crocker died in 1821, his two sons inherited the house. The sons divided the house vertically, even splitting rooms and fireplaces in the process.

The house is surprisingly elaborate for Cape Cod in the eighteenth century. In a region of small farms and fishing ports, the rich paneling, large rooms, and elegant details of the house make it unusual for its time and place. The home remained in the Crocker family until the 1930s. 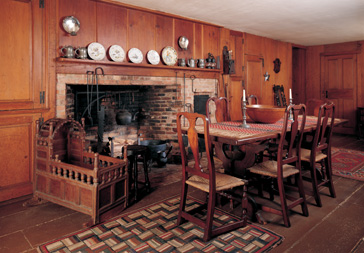 In 1935 Mary Thacher, an independent and civic-minded philanthropist with a great interest in history and antiques, purchased Winslow Crocker House.

Mary Thacher’s family has a long history on the Cape. Anthony Thacher (c. 1589-1667) emigrated from England in 1635, settling in Yarmouth. His son John (1639-1713) was prominent in the militia and in government, serving both the town and the colony for about twenty years. John Thacher was born out of tragedy. His parents and their children, when they first immigrated to America, were traveling from Ipswich, Massachusetts, toward Marblehead when they sailed into a hurricane. The ship was wrecked, and all the passengers, except for Anthony Thacher and his wife, drowned. Among the lost were the Thacher’s children from Anthony’s first marriage. John Thacher was born four years later, as his parents began their new life in Massachusetts. He later built a house near the Common in Yarmouth Port, and his family continued to grow.

Mary Thacher, one of his descendants, was born in 1868, the third of five children. Her home was at 51 Mount Vernon Street on Boston’s Beacon Hill, but the heart of the family was always at “The Homestead” in Yarmouth Port. The extended family spent every summer in their houses near the Yarmouth Port Common.

She and her younger sister, Martha, attended Miss May’s Finishing School in Boston. Both became accomplished pianists, but Mary always loved sports. When at the Cape, she swam every day, rode her bicycle, and played golf on the family nine-hole course. Eventually, the family donated the golf course to the Historical Society of Old Yarmouth. It is now open to the public, with walking trails throughout.

When their parents retired to Yarmouth Port, Mary and her sister Martha moved along with them. After their father died, the two women became their mother’s caregiver until her death in 1919. Two years later Martha died and Mary decided that she wanted a home of her own. She bought her ancestor Colonel John Thacher’s house, built c. 1680, on Route 6A at the corner of Thacher Street.

Mary’s interest in antiques continued to develop. She immersed herself in books on historic furnishings. Seventeenth- and eighteenth-century furnishings were relatively out of style in the early twentieth century and could be purchased at reasonable prices. Mary began frequenting antique shops in Boston and New York, as well as on Cape Cod. She bought pieces at hotel auctions in New York and Boston. Not confining her collecting to any one style, she bought what appealed to her, be it a seventeenth-century English chest or a twentieth-century American corner cabinet. She purchased mostly eighteenth-century American pieces made in New England. Thacher House provided a place to house her collection.

As her collection grew, Miss Thacher decided to buy another house. She purchased the c. 1780 Winslow Crocker House in West Barnstable with the intention of moving it to a piece of property adjacent to Thacher House. The move started in May 1935 and lasted until March 1936. The house was taken apart, beam by beam, and reassembled in Yarmouth Port.

At the same time the house was moved, Miss Thacher remodeled the interior, removing the evidence of division between the Crocker brothers. She took a non-historical approach to parts of the restoration, because her primary goal was to provide a backdrop for the display of her collection. Changes included the stripping of all wood paneling, replacing the nineteenth-century six-over-six style windows with “Colonial” twelve-over-twelve, and rebuilding fireplaces as Miss Thacher believed they were originally. A full basement was dug and electricity, central heat, a kitchen, and bathrooms were added to make the house more comfortable.

Mary Thacher’s furniture collection represents a thorough survey of early American styles, including Jacobean, William and Mary, Queen Anne, and Chippendale pieces. The furniture is accented by colorful hooked rugs, ceramics, and pewter. However, she did not collect furniture and objects in order to teach; it was purely for her own enjoyment and to construct an atmosphere of “old Cape Cod” in her eighteenth-century home. Most of the objects do not have records of purchase, provenance, or history attached to them.

Although she was wealthy, Mary lived simply. She lived in only a few of the rooms in the house and rarely entertained. She had a driver and a few other servants to help run the household, but most of the family gatherings and parties took place across the street at other family homes. Many of the rooms in Winslow Crocker House were seldom used, but still fully furnished with antiques.

Mary Thacher intended her home to be a museum from the time she purchased it, and in fact gave both houses to Historic New England, then the Society for the Preservation of New England Antiquities, in 1936, with the understanding that she was to live there for the rest of her life. She passed away as the result of an accident at the age of eighty-eight in 1956. Both Winslow Crocker House and Colonel John Thacher House were transferred to Historic New England at that time. 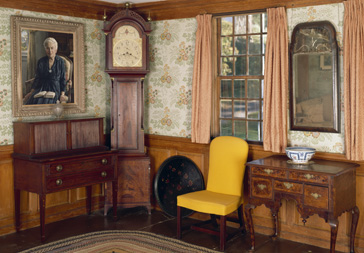 Winslow Crocker House has been open for tours as a historic house museum since the late 1950s. At times, parts of both houses were lived in by tenants and caretakers. The interiors of Winslow Crocker House are largely as Mary Thacher left them, furnished with her collections. Take a tour and experience a colonial Cape Cod house with a twentieth-century flavor.

Find out the latest on the Eustis Estate in Milton, Mass.

More things to do in Yarmouth Port

Yarmouth Port is right in the middle of Cape Cod, one of the most distinctive and beautiful areas of New England. Since the earliest colonial settlements in nearby Plymouth, the Cape has grown and changed but remains surrounded by natural beauty. The Cape is a destination for its beaches, historic sites, shopping, restaurants, and its easy access to the islands of Martha’s Vineyard and Nantucket. Visitors can travel along Route 6A, The Old King’s Highway, which is a historic district, and find dozens of places to stay, visit, eat, and shop. Larger thoroughfares like Routes 6 and 28 lead to even more activities and attractions. And of course, no matter where you travel on the Cape, the beach is never far away.

Contact the Cape Cod Chamber of Commerce for more information about lodging, attractions, restaurants, and ideas for itineraries.