The Lyman Estate, also known as “the Vale,” is a National Historic Landmark and one of the finest U.S. examples of a country estate following eighteenth-century English naturalistic design. In 1793 shipping merchant Theodore Lyman commissioned famed architect Samuel McIntire to design and build a Federal-style house for his family.

The family enlarged the house in 1882 in the Victorian style and then remodeled it in the Colonial Revival style in 1917. The thirty-seven acres include beautifully preserved gardens and historic greenhouses. Hear the story of the Lyman family during a tour of the mansion, which is used today as a venue for weddings and corporate events. Its architectural features include a graceful oval parlor and elegant ballroom, which can be seen in the 2019 film adaptation of Little Women. Stop by the Lyman Estate Greenhouses for beautiful plants and expert advice.

Know Before You Go

Historic New England is following all state, local, and CDC safety guidelines for Waltham. Masks are required for all staff and visitors. Enhanced cleaning and disinfectant measures are in place. Tour group size is limited.

Ample on-site parking for cars; buses must be prearranged.

The Lyman Estate, or "The Vale"

In 1793 wealthy shipping merchant Theodore Lyman built a summer retreat for his family, who lived on Boston’s Beacon Hill the rest of the year. 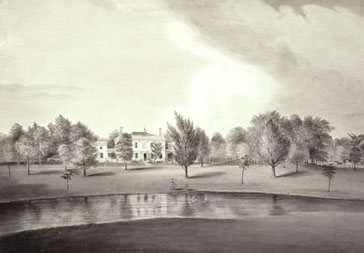 Theodore Lyman (1753-1839) was born the son of a minister in York, Maine. He established himself in shipping before moving to Boston after the American Revolution. He expanded his business interests from the Northwest fur trade into the China Trade, acquiring sufficient wealth by the time he was forty years old to support a country estate and gentleman’s farm. Theodore Lyman began to acquire land in Waltham in 1790 through the purchase of small farms. In 1793 he commissioned famed architect Samuel McIntire of Salem, Massachusetts, to design and build an elegant country house in the Federal style. The formal name, “The Vale,” was chosen as a reference to the estate’s location in a slight valley, with a brook running through it.

Mr. Lyman married twice. His first wife was Sarah Emerson and through her family’s wealth he established his business in Maine. Following her death, he married Lydia Pickering Williams from Salem’s prominent Pickering family, and it was through Lydia’s Salem connection that McIntire was hired. With two daughters from Theodore’s first marriage, the family grew to include four sons and a daughter who, through marriage within Boston’s merchant class, created a large, influential, and closely linked network of cousins, aunts, and uncles with shared business, social, and cultural interests throughout the region.

Beginning with Theodore Lyman, each successive generation to own the estate had a passion for horticulture and agriculture. In addition to a 600-foot-long Peach Wall, the estate contains a completely intact historic greenhouse complex which was begun in 1800 with the construction of the Ancient Greenhouse. In 1804 the three-part Grape House was built to house citrus, figs, pineapples, bananas, and forced native fruits. This was followed in 1820 by the creation of the Camellia House, and in 1840 the Grape and Camellia Houses were connected, thereby creating another greenhouse. By 1839 the estate contained 400 acres and included meadows, ponds, pleasure grounds, woodlands, a deer park, gardens, greenhouses, a working farm, as well as the mansion, carriage house, gardener’s cottage, and various farm buildings.

It was used primarily as a warm-weather retreat for the family, though both Theodore and George Lyman resided here year round as widowers. The family lived on Boston’s Beacon Hill the rest of the year. Large expanses of open countryside, together with proximity to Boston, made Waltham an attractive location for country retreats. The estate was beloved by four generations of the Lyman family until 1952, when the fifth generation donated the property to Historic New England. 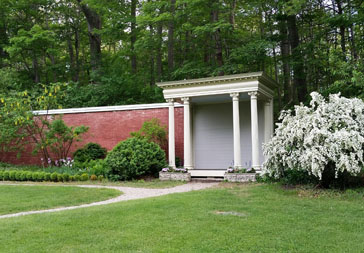 Following Theodore Lyman’s death in 1839, the property was inherited by his eldest son, George Williams Lyman (1786-1880). After graduating from Harvard in 1806, George continued in the shipping business, trading in China and Europe. But with shipping prospects diminished by the 1807 embargo and the War of 1812, George embarked on new pursuits. During his lifetime, he was involved with a group called the Boston Associates in the creation of New England’s textile mills, and served as a director of the Boston and Lowell Railroad and a director of the Columbian Bank, as president of the Massachusetts Hospital Life Insurance Company, and of the Massachusetts Society for Promoting Agriculture. His first wife was Elizabeth Gray Otis, the daughter of Harrison Gray Otis and Sally Foster Otis, prominent Bostonians who built a Federal-style mansion in Boston’s Bowdoin Square, now owned by Historic New England. After Elizabeth’s death in 1824, George married Anne Pratt, a niece of his mother’s. His family, like Theodore’s, was large, with two sons and a daughter from his first marriage followed by two daughters and a son from his second.

To the three children of his second marriage, George Lyman gave land on the hill north of his Waltham estate where he and Anne had summered before moving to The Vale. This allowed each of them to build a summer home there in the 1860s, creating a family compound around which the bonds of family became even more deeply rooted in the ancestral retreat. The growing families of Arthur Theodore Lyman (1832-1915), and his sisters Sarah (Mrs. Philip H. Sears) and Lydia (Mrs. Robert Treat Paine) were a delight to George and Anne Lyman.

Upon George’s death, the estate was purchased by Arthur, the eldest son from George’s second marriage, as the oldest son, George T. Lyman, “could not afford it” (according to family accounts) and the next oldest, William Pratt Lyman, had predeceased George. Arthur entered business during times that included the Panic of 1857 (a dislocation that caused his marriage to Ella Bancroft Lowell to be postponed to 1858), the Civil War, and the post-war recovery years. A brilliant student, Arthur trained as a lawyer but followed in his father’s footsteps, working in the textile industry. He became highly successful, serving in high positions of responsibility for many of the textile mills located in Lowell, Lawrence, and nearby communities. 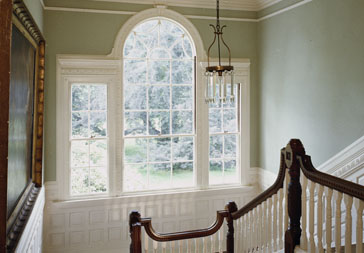 For Ella and Arthur, the parents of six children who ranged from twenty-two to three years of age when The Vale was acquired, the mansion was much in need of significant enlargement. They hired Boston architect and Waltham native Henry W. Hartwell of the firm Hartwell and Richardson to undertake this large project. The alterations included updating the kitchen and laundry wing, extending the second floor with additional bedrooms, creating an entire third floor of servants’ bedrooms, relocating the main staircase with its prominent Palladian window, constructing two-story bays on the south elevation, and installing up-to-date bathrooms. All of these changes thoughtfully extended the original Federal architecture in the picturesque and fashionable Queen Anne style which added elaborate woodwork, colorful tile, floral wallpapers, and patterned chimneys and sash to the old house. The couple chose to leave unchanged the ballroom (which the Lymans knew as the library) and bow parlor – both pristine examples of Federal-period design and sacred to the memories of family gatherings for funerals, weddings, and baptisms.

Upon Arthur T. Lyman’s death at age eighty-three in 1915, the Estate was inherited by his son, Arthur T. Lyman Jr. (1861-1933). Arthur Jr., his wife Susan Cabot, and their five young adult children continued the tradition of summering at The Vale. Arthur’s business interests included positions as director and officer of textile manufacturing companies, as well as the Massachusetts Life Insurance Company. He served on the boards of the Boston Symphony Orchestra and the Waltham Hospital. As the New England textile industry became more problem-ridden, Arthur became increasingly drawn to politics, most specifically to the Massachusetts Democratic Party. He became active in Waltham politics as chair of the Board of License Commissioners, Waltham (1894), then as mayor of Waltham in 1896. Among his other accomplishments, he was president of the Democratic Club of Massachusetts, chairman of the State Democratic Committee, then director of finance for the Massachusetts branch of the National Democratic Committee. 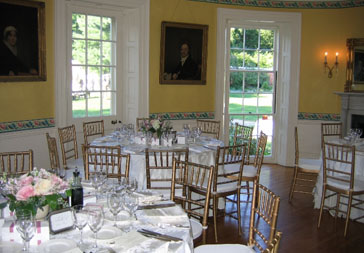 The final changes to the mansion’s architecture were made by Arthur and Susan in 1917. The couple hired a Boston interior designer and antiques dealer, Miss Nonie Tupper, to renovate in the then-fashionable Colonial Revival style. On the interior, the renovations are most evident in the dining room and east parlor, where rooms were simplified and reproduction McIntire-style mantels were installed. Once again, the bow parlor and ballroom were preserved as relics of the early house. On the second floor, the family added en-suite bathrooms to the south-facing bedrooms, including the two tiled baths in an old dressing room above the front entrance. The exterior changes included removing Victorian embellishments, changing the window sash, and rebuilding the chimneys. In 1930 another greenhouse was built for the purpose of growing cut flowers for the floral arrangements that filled the house and which a “flower maid” changed three times a week. Arthur T. died in 1933 and The Vale was inherited by his widow, Susan Cabot Lyman. 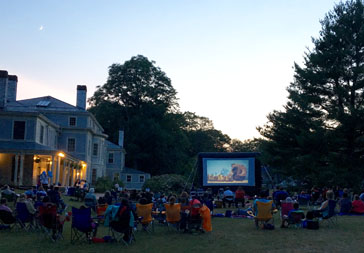 Upon Susan Cabot Lyman’s death in 1951 at the age of eighty-seven, the Lymans’ five children inherited the estate. Seeking to preserve it for others to enjoy, they generously donated it to Historic New England. The estate now consists of the mansion, historic greenhouses, carriage house, gardener’s cottage, and thirty-seven acres of gardens and grounds. The estate is a popular site for private functions, such as weddings, parties, and corporate events. Tours of the mansion are available on the first Saturday of every month and by appointment, and the mansion is periodically open for lectures, outdoor movies, and other public programs. The Lyman Estate Greenhouses are open year round for casual visitation, group tours, and plant sales.

Lyman experimented with and promoted forward-looking agricultural practices and floriculture. In the 1820s he imported some of the first European copper beeches to be planted in America. The estate’s greenhouse complex is one of the oldest surviving examples in the country. The estate made a magnificent impression on all who saw it. In 1822 poet William Cullen Bryant, who described its marvels in a letter, called it “a perfect paradise.”

As the Victorian era advanced, the family embellished the landscape, planting flowering shrubs along the pathways and cutting flower beds into the lawn. Behind the house, the rhododendrons, azaleas, and magnolias planted before the Civil War still light up the yard each spring. The 1938 hurricane downed many of the estate’s large old trees. Today, the sugar maples lining the entrance road, the copper beech beside the Camellia house, and the large tulip tree by the parking lot remain as some of the oldest trees on the property.

Host your wedding at the Lyman Estate.

Get beautiful plants, expert advice at the Lyman Estate Greenhouses.

Movies at the Mansion: Disney’s Encanto

Movies at the Mansion: Captain Marvel

Movies at the Mansion: Notting Hill

More things to do in Waltham

Waltham is a vibrant city of 60,000 with a rich mixture of historic and cultural institutions, high-tech firms, and the presence of three prestigious universities: Brandeis, Bentley, and Boston University’s Center for Digital Imaging Arts. The city is home to a variety of immigrant communities, which makes Waltham a fun, interesting, and culturally diverse destination. Moody Street, known locally as “Restaurant Row,” is filled with restaurants serving all manner of international cuisine, as well as traditional American food.

Your visit could be augmented by experiencing the historic sites, shops, and restaurants of Lexington, Concord, Cambridge, and Boston – all located within five to ten miles of Waltham.

To learn more about Waltham, please contact the Waltham Tourism Council and the Waltham West Suburban Chamber of Commerce.

For information about nearby areas contact the local chambers of commerce in Lexington, Concord, or Cambridge, or the Greater Boston Convention and Visitors Bureau.