Country elegance and a romantic story

Barrett House, also known as Forest Hall, was built c. 1800 by Charles Barrett Sr. for his son Charles Jr. and daughter-in-law Martha Minot on the occasion of their marriage. Its grand scale was encouraged by Martha’s father, who promised to furnish the house in as lavish a manner as Barrett Sr. could build it. It features family furnishings, French scenic wallpaper, and a third-floor ballroom with period musical instruments.

The mansion sits on more than seventy acres that include perennial and annual gardens and a Gothic Revival summer house that crowns the hillside overlooking the expansive grounds. Learn about the multiple generations that resided at Barrett House, their lifestyles, and the impressive country estate that represents a vanished way of life from a time when New Ipswich was an active mill town.

Historic New England is following all state, local, and CDC safety guidelines for New Ipswich. Tour group size is limited. At this time, masks are optional for all staff and visitors.

There is limited parking available in the Barrett House driveway. Ample street parking is available. 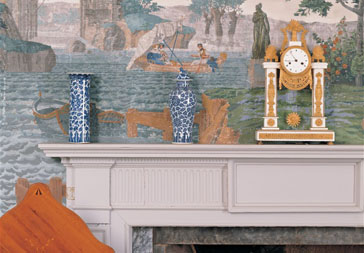 Elegance in the Country

Barrett House was built in 1800 as a wedding gift for Charles Barrett Jr. and Martha Minot by Charles Barrett Sr. According to tradition, Jonas Minot, the bride’s father, declared he would furnish as fine and elegant a house as the father of the groom could build. 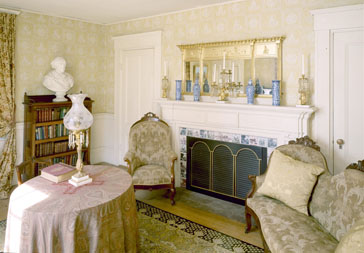 After the death of Martha Barrett in 1842, her second eldest son, Charles III, lived at Barrett House with his family for several years before moving to Cambridge, Massachusetts, to pursue a prosperous career as a book dealer.

In 1848 George Barrett, the eldest son of Charles Jr. and Martha, along with his wife Frances Ames Barrett, took up residence in Barrett House and raised a family there.

In 1862 George Barrett died, leaving Frances the house. To accommodate the growth of her extended family, Frances built an adjoining ell for her son Edward and his family. She maintained residence in the main house with her younger son, George Robert.

By the middle of the nineteenth century New Ipswich, like many New England towns, underwent an economic and population decline. Bypassed by the railroad and deeply affected by the closing of local mills, many people moved away, including George Robert Barrett. 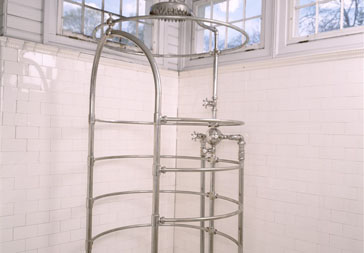 After Edward Barrett and Frances Barrett died in 1883 and 1887, respectively, George Robert Barrett took ownership of Barrett House. He and his wife, Elizabeth Barr Barrett, were living in Boston at the time. In an effort to make Barrett House their comfortable country summer retreat, they undertook several renovations, including the addition of two luxurious bathrooms.

George Robert and Elizabeth’s renovation of Barrett House took several years and was never completed. Elizabeth died in 1911 and George Robert in 1916, leaving renovation and redecoration of some rooms unfinished. Crates of furniture and fixtures, still in their original packaging, are in the house today. 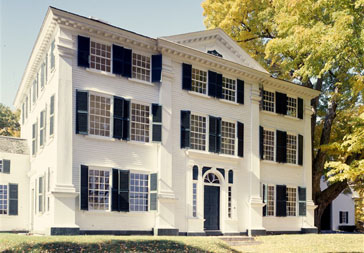 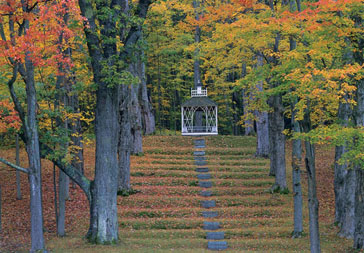 In 1948 Caroline Barr Wade donated Barrett House with a generous endowment to Historic New England as a memorial to the Barrett family. In 1948 and 1949 Historic New England (then known as Society for the Preservation of New England Antiquities) undertook a significant restoration project at Barrett House. Plaster was repaired, period wallpapers were hung, and the kitchen was restored to its c. 1800 state. In 1950 Barrett House opened as a museum, sharing the history of the Barrett family and its vanished way of life with the public.

More things to do in New Ipswich

New Ipswich, incorporated in 1796, is a small, quiet town in rural southern New Hampshire. The surrounding area offers visitors an array of things to see and do indoors and outdoors. For the active, the area’s mountains, parks, rivers, and lakes offer countless ways to get outside and experience New England’s natural beauty. Area art galleries, museums, shops, and restaurants offer visitors a selection of intriguing but gentler travel options as well.

Contact the Monadnock Travel Council or New Hampshire’s Division of Travel and Tourism for more information on things to see and do in the area.