In 1821 four intact rooms from an earlier house were transported by ox sled to Salem’s fashionable Chestnut Street to form the core of a new Federal-style mansion being built by Captain Nathaniel West. Nearly a century later, Anna Phillips bought the house and launched a fourteen-month renovation in the Colonial Revival style. Today Phillips House is the only mansion open to the public on Chestnut Street.

When Anna Phillips, her husband Stephen Willard Phillips, and their five-year-old son moved in, they brought with them a family collection that spans five generations and blossomed during Salem’s Great Age of Sail. Enjoy a glimpse into the private world of the Phillips family and their staff during the early decades of the twentieth century. The kitchen, pantry, and a domestic staff bedroom, present a rarely seen picture of how great houses functioned as new technologies were being introduced.

Historic New England is following all state, local, and CDC safety guidelines for Salem. Tour group size is limited. At this time, masks are optional for all staff and visitors.

From Route 128, take exit 39 to Lowell Street East. Follow signs into Salem, staying straight to end (street name changes). Turn left into Essex Street. At next light, turn right onto Flint Street, and then take an immediate left onto Chestnut Street. Phillips House is the fifth house on the left; visitor entrance at rear of house.

During the month of October, on-street parking on Chestnut Street is limited. Please visit the city’s website or Haunted Happenings for additional parking information.

The Federal-style mansion is located on Salem's picturesque Chestnut Street. 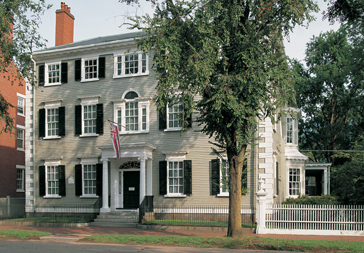 Architecturally, Phillips House contains layers of history. From the front, it looks typically Federal in style, with a symmetrical façade, elegant proportions, a grand entryway, columns, fanlight, sidelights, a Palladian window, and a hipped roof. The house also has quoins, or masonry blocks at the corner of a wall, which were more common in the previous Georgian period. In contrast, the inside of the house is a combination of the Federal style and fashionable early twentieth-century Colonial Revival styles, as remodeled by the Phillips family shortly after purchasing the house in 1911.

This long evolution began in 1800, when Captain Nathaniel West and his wife Elizabeth hired Samuel McIntire to build a grand country estate for them in South Danvers, Massachusetts, approximately four miles from Salem today. Elizabeth was the daughter of Elias Haskett Derby, America’s first millionaire. Unfortunately the West marriage ended in a bitter and public divorce. Elizabeth, determined that her ex-husband should never get his hands on the house, left it to their three daughters. 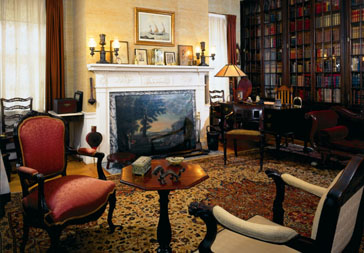 The Move to Chestnut Street

After Elizabeth died in 1814 and the youngest daughter Sarah died unmarried and childless in 1819, Captain West inherited one third of the estate, which equaled four rooms of the house. In 1820 he had those rooms removed from the Danvers house and moved to Salem, using teams of oxen and logs. These rooms make up the front four rooms of the present house. West added a connecting hallway, a third floor, and a kitchen wing in the rear. The West family lived in the home until 1836. 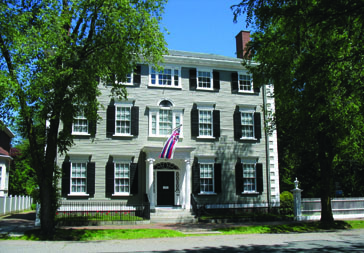 A Boarding House and School

The West family continued to own the house into the nineteenth century. By 1836 Malvina Tabitha Ward and her daughter took up residence to run a genteel boarding house and school. In 1863 Nathaniel West’s trustees sold the house to Mrs. Ward for $6,000. In 1875 Sophia Ward, possibly the granddaughter of Malvina Ward, sold the house to Annie B. Webb, wife of William G. Webb, for $15,000. 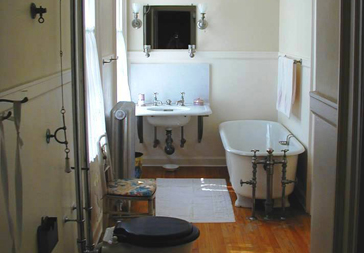 Not an original photograph. Photograph was saved from photographic tour on HistoricNewEngland.org 2010-2015.

By 1884 the house had nearly doubled in size to the footprint we see today, including the existing laundry, kitchen, and second-floor guest room. Upon Mr. Webb’s death in 1896, David Mason Little, a relative by marriage, lived at the house with his family until 1903. The Misses King then rented it from Annie Webb, a founding member of one of Salem’s philanthropic sewing circles, the “Cheerful Workers,” until 1911. Over the years the interior and parts of the exterior were changed to reflect various styles that became popular, from Federal to Victorian to Colonial Revival. 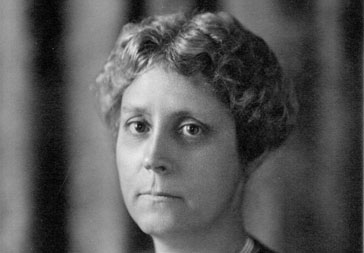 Anna Wheatland Phillips (pictured) bought the house in June 1911 for “$1.00 and various sundries.” Within a few months, she and her husband, Stephen Willard Phillips, hired architect William Rantoul to remodel the house in the Colonial Revival style. Using America’s architectural past for inspiration, Rantoul stripped away the elaborate Victorian interior designs, incorporated large windows to let in the sunshine and fresh air necessary for good health and sanitation, and in the dining room and other spaces recreated a “Federal-style” look.

The Phillips family, while appreciating the past as reflected in the beauty of their Federal house, also wanted a comfortable, modern home which reflected their status and wealth; where they could raise their son Stephen, entertain on a frequent basis, and display generations of furnishings and artwork. Two staircases were removed to make way for up-to-date bathrooms, closets, and a great deal of living space. For everyone’s comfort the house was fully electrified and, for the staff, a modern gas stove was installed next to the coal-fired range in the kitchen.

Five domestic staff assisted the Phillips family with the running of the house. Three live-in servants, including a cook Bridget Durgin, first-floor maid Delia Cawley, and nursemaid Catherine Shaunessy, were Irish-born single women who had separate bedrooms in the back wing of the third floor. Two male staff, coachman/groundsman Cornelius “Con” Flynn and chauffeur Patrick O’Hara, were needed for the horse-drawn carriages and the automobiles owned by the family. The men did not live on the property, but went home at night to be with their families. A selection of carriages used by the Phillipses and three of the automobiles used during this time are on view today in the carriage house. The domestic staff continued to live in the home after Stephen Willard Phillips’ death in 1955. 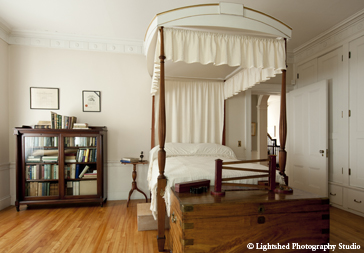 Stephen Phillips died in 1971 and requested that his childhood home be turned into a historic house museum. His wife Betty, residing in the family’s neighboring home, officially opened the Stephen Phillips Memorial Charitable Trust for Historic Preservation in 1973, exhibiting five generations of Phillips family furnishings, art, and antiques. Mrs. Phillips was active in the museum’s administration until her death in 1996. From that point forward, the daily operations and programming were overseen by the board of trustees and one staff person.

Historic New England acquired Phillips House in 2006 from the board of trustees. The museum offers a variety of public programs that focus on the many stories and objects in the house including an extensive film collection, a variety of antique carriages and cars, and specialty tours that highlight what life was like in Salem in the early twentieth century.

Visit nearby Gedney House in Salem.

More things to do in Salem

Salem, Massachusetts, is America’s Bewitching Seaport. Located on the Massachusetts coast sixteen miles north of Boston, Salem is easily accessible by car, train, and seasonal ferry. Most noted for the Salem Witch Trials of 1692, Salem is rich in American history, maritime heritage, art, architecture, and culture. Its varied accommodations and unique shopping and dining make Salem an appealing destination for all ages. Salem was recognized as one of the National Trust for Historic Preservation’s Dozen Distinctive Destinations in 2005, and the American Planning Association recognized Salem as one of their Great Places in America in 2009.

Contact Destination Salem or the Salem Chamber of Commerce for listings of restaurants and lodging, and many more local activities.