The center of the community, preserved

Rocky Hill Meeting House is temporarily closed due to COVID-19.

Rocky Hill Meeting House is one of the best preserved examples of an original eighteenth-century meeting house interior. The fact that it has served no active congregation since the mid-nineteenth century led to its remarkable state of preservation. Eighteenth-century hardware remains intact throughout the building. The marbleized pulpit and pillars supporting the upper galleries still boast their original paint.

Rocky Hill Meeting House was built in 1785, replacing a c. 1715 meeting house for the West Parish of Salisbury. It was strategically placed along the only road that crossed the swift Powow River (via ferry) and led travelers to the Salisbury Point area, and then onward toward Portsmouth. In fact, George Washington paused here to greet the townspeople on his northward journey in 1789.

Rocky Hill Meeting House is just off Elm Street next to the Sparhawk School.

Please park along the driveway but do not block traffic.

Rocky Hill Meeting House was completed in time for a December 1785 town meeting. Box pews were sold to members of the congregation. 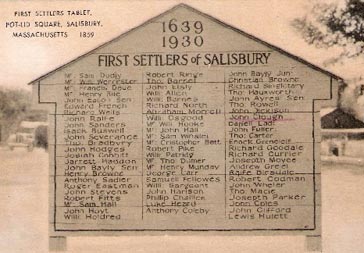 Rocky Hill Meeting House was built in 1785 for the West Parish of Salisbury, annexed to Amesbury in 1886. Its location was determined by the needs of the parish community, and by its proximity to the Portsmouth Road, a direct route from the ferry landing on the Merrimack River to points north. It was built to replace the 1716 meeting house of the same name, located to the north of the present building. After nearly seventy years of use, the original Rocky Hill Meeting House was in need of repairs, and the parish decided to build a new structure. After significant squabbling, the town decided to build the present meeting house in a compromise location closer to the Point Shore neighborhood that had recently become quite prominent.

Reverend Samuel Webster was the minister of the West Parish until 1796, and after his long tenure (he had served the parish since 1741 and it was his first and only position), the meeting house went through a series of ministers with mixed success. Reverend Beattie (1797-1801) died after three years in the pulpit, and his successor, Reverend Balch (1802-1816), was a polarizing and controversial figure. 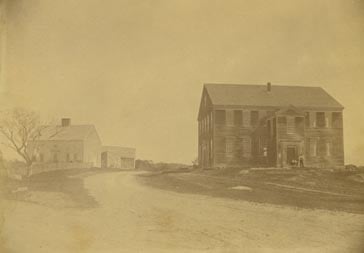 Exterior view of the Rocky Hill Meeting House and Parsonage, Amesbury, Mass. Two men are gatehred near the front doorway.

Reverend Balch was dismissed from the Rocky Hill pulpit in 1816 after a council was called by church members to address grievances against him. From his departure until 1835, the parish was without a settled minister. It was a time of great uncertainty for the parish. Mandatory parish taxes were abolished in 1833 and many of the members of the church chose to attend services at churches of other denominations or at other locations. The Point Shore area, which had always provided a significant portion of the congregation, built two new churches, one in 1827, and one in 1835. The remaining congregation could not agree on a new minister. In 1834 Reverend Gunnison was hired at Rocky Hill, preached for several months, and then left, taking a significant part of the congregation with him. It was the end of Rocky Hill as the center of worship in the West Parish. 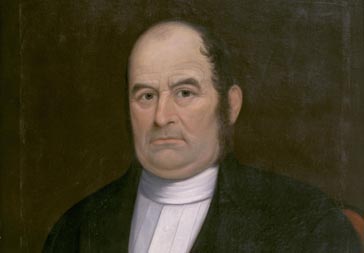 Reverend Sawyer was invited to preach at Rocky Hill on December 17, 1835, and made a determined attempt to revitalize the flagging membership. He met with limited success, but was a hard-working and beloved member of the community, representing Salisbury in the legislature for several years, and sitting on the school committee. In the course of his long tenure at Rocky Hill, Reverend Sawyer presided over 1,400 weddings and 1,100 funerals. Throughout Newburyport and Salisbury, he was known as “Father Sawyer.” He was a cautious and conservative leader whose silence on the issue of slavery in an ardently abolitionist town drove many into more progressive congregations. Reverend Sawyer preached his last sermon in 1870 at age eighty-eight, and congregants noted that he did not require glasses. He died several months later. 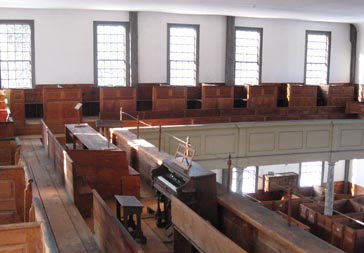 These photos were taken for the PMF Survey 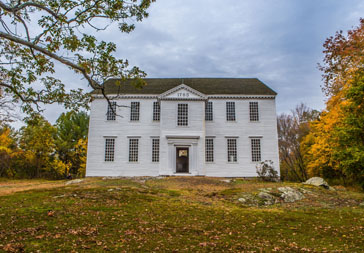 In January 1942, the West Parish Society gave Rocky Hill Meeting House to Historic New England, along with its silver communion service. This gift was the last act of the West Parish Society, and all of its funds and records were transferred as well. A Committee of Stewards was set up to oversee the management of the site and raise funds for its care. In 1965 the Rocky Hill parsonage was moved to make room for Route 495. The Meeting House was opened for tours in 1970, and continues to be open for town events and several services each year.

More things to do in Amesbury

Though it is actually a city, Amesbury continues to be known as a town, an indication of its place as a tight-knit community centered on a vibrant downtown. Situated along the Merrimack and Powow Rivers, Amesbury was a thriving mill town for much of the nineteenth century and had a wealth of brick industrial architecture, now put to the service of a thriving artist and business community.

For more information about dining, lodging, and shopping in Amesbury, please visit the Amesbury Chamber of Commerce.