Life at home over three centuries

Coffin House, occupied by the Coffin family over three centuries, reveals insights into domestic life in rural New England. The house, which contains the family furnishings, began as a simple dwelling built in the post-medieval style. Tristram Coffin and his family lived, cooked, and slept in two or possibly three rooms; their possessions were few. Beginning in 1712 the house more than doubled in size to accommodate a married son and his family.

As the family grew, they added partitions and lean-tos so that different generations could continue to live together under one roof. In 1785 two Coffin brothers legally divided the structure into two separate dwellings, each with its own kitchen and living spaces. With rooms from the seventeenth, eighteenth, and nineteenth centuries, Coffin House depicts the impact of an expanding economy and new concepts, such as the notion of privacy, on architecture and modes of living.

Historic New England is following all state, local, and CDC safety guidelines for Newbury. Face coverings are required for all staff and visitors. Enhanced cleaning and disinfectant measures are in place. Tour group size is limited.

Coffin House is on Route 1A in Newbury, across from the First Parish Burying Ground.

Street parking is permitted for short periods of time. 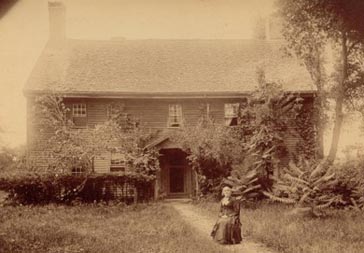 The significance of Coffin House lies partly in the age of the original building but more importantly in the way in which it reveals how a home, built in 1678, grew and changed over the years to accommodate the needs of six generations of one family.

When Tristram Coffin Jr. came to Newbury with his parents, siblings, aunts, and grandmother in 1643, it was a colonial settlement with Indigenous tribes nearby. The town’s economy was primarily a combination of agriculture and husbandry. There was a limited number of artisans and manufacturers. Some of the earliest were weavers, tanners, and shoemakers.

The Coffin family was originally from Devonshire, England, and was somewhat prominent there. Tristram Coffin Sr. was a royalist during the English Civil War. He chose to leave England when the king was deposed and Oliver Cromwell installed. In 1646 the family, with the exception of the two older sons, Peter and Tristram, emigrated, eventually settling on Nantucket. Peter, the eldest son, left for New Hampshire, leaving fourteen-year-old Tristram Jr. the only remaining Coffin in Newbury. It is possible that Tristram was indentured to a local tradesman, as was common. It is also possible that his master was Henry Somerby, whose twenty-eight-year-old widow Judith married the twenty-one-year-old Tristram in 1654.

It was long believed that Tristram brought his young bride to Coffin House in 1654. However, conclusive dendrochronology has since proven this house to date from 1678. Because we know that Judith inherited a substantial house and many possessions from her first husband, it is assumed that the Coffins set up housekeeping in another house on the lower green near the Parker River. It was in the other house that Judith and Tristram raised their ten children and her three Somerby children as well.

Thus the question remains: why would forty-six-year-old Tristram and fifty-three-year-old Judith move house to the upper green? We know that she still owned the Somerby house in 1705, the year she died. The clue may lie in the death of three of her sons, all in adolescence or early adulthood, in the years preceding the 1678 building of this house. Enoch and Joseph Coffin died in 1675 and 1677 respectively. Her only surviving male Somerby child, Daniel, succumbed to a wound inflicted during a planned attack on the Narragansett tribe as part of Metacom’s War (also known as King Phillip’s War) in 1676. Because Daniel stood to inherit a substantial portion of his late father’s estate, his death made a great deal of land available to the Coffins. With only four children still at home, devastated by the loss of three of their sons, the Coffins left the house in which they had begun their married life, and moved to a small house on the upper green, to land that was most likely slated to pass to Daniel Somerby. We also know that two of the Coffin daughters, Deborah and Mary, began married life on October 31, 1677, further reducing the household.

The upper green in Newbury grew rapidly in the 1660s and 1670s as the sons and daughters of the first colonial settlers built homesteads. Stephen Swett built the house at 4 High Road in 1670, and the Atkinson house on the upper green was built in 1664. The carpenters who built all of these houses adapted the building style and methods of England to the growing population of Newbury and the more severe climate of New England.

The original Coffin House, or part of it, survives today as the back section, except for the small addition on the southwest corner, which was added in the nineteenth century. Typical of seventeenth-century New England buildings, the main facade faced south to take maximum advantage of the sun’s warmth in winter. There may have been a porch with a chamber above off the south side of the house originally. 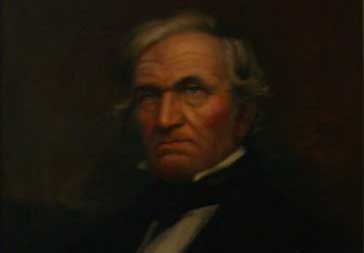 Tristram Jr. and Judith lived in the house until they died in 1704 and 1705 respectively. The house and land were inherited by their youngest son, Nathaniel, who had remained at home with his aging parents. In 1693 he brought his bride, Sarah, to live in the house. Nathaniel and Sarah had eight children (all but one lived to adulthood), five of whom were born before the deaths of Tristram and Judith. In 1712, the Coffins added the front range to the house. This large and imposing addition faced the High Road and also demonstrates important changes in Newbury in the eighteenth century. The road out front was so developed by this time that houses were reoriented to face it, clearly not the case when the older part of the house was built in 1678. It included refinements such as plaster between the ceiling joists in the southeast chamber and a chamfered roof frame. The house may well have also had a plaster cove cornice along the High Road facade. This elegant feature, introduced in the 1690s, was found in several other substantial Newbury houses built in the period, including the Benaiah Titcomb house and the Pillsbury house. At the time the addition was created, the chimney bay in the ell was made wider and the chimney rebuilt to include fireplaces facing both ways.

Nathaniel, like his father, appears to have combined a variety of activities in order to support his family. On many documents, such as land deeds, Nathaniel is listed as a merchant-tailor, as was his father. However, family account books indicate that he started the tanning business that would sustain the family into the 1800s. Like his father, he was prominent in Newbury affairs. He was a deacon of his church, he served the colony beyond the town as a representative to the General Court from 1719 to 1721, was Councillor to the Province in 1730, and Justice of the Peace in 1734.

In 1725 Nathaniel’s son Joseph brought home his bride Margaret to set up housekeeping, and the house saw the start of another generation. When Joseph and Margaret moved in, Joseph’s parents and three of his siblings were still living there. Margaret and Joseph had eight children (six survived to adulthood). Joseph and his son, Joshua, like the generations before them, engaged in a variety of activities to sustain the family. They continued in the tanning business, but also maintained tillage land, orchards, pasture, and livestock.

Both Nathaniel and Joseph were active in the local community. They held the office of Newbury town clerk consecutively from 1711 to 1773. The town’s population continued to grow. The first census, taken in 1765, indicates that the town’s population had reached 2,960. The town was an important agricultural community, but manufacturing enterprises were growing.

In 1755 Joseph’s son Joshua (pictured) married Sarah Bartlett and brought his bride back to the house where his parents continued to live. Joshua and Sarah had twelve children (eight survived to adulthood). Joshua and Sarah also took in apprentices. Historic New England has a copy of the 1772 indenture between a Daniel Mitchell of Wells, Maine, and the Coffins. The agreement is that the Coffins will teach Daniel “the art, trade, and mastery of a tanner…during the term of 5 years, seven months, and 75 days..and also to learn him to read and write legibly…and at expiration of term give him 2 good suits of apparel for all parts of his body, one for the Lord’s day, the other for working days.”

In 1785 the house which had, for so many years, seen three generations living as one family was legally divided. Edmund Coffin, one of Joshua’s two sons, reached twenty-one and wanted his share of his deceased father’s estate. Consequently, a division was made first between the two sons and their widowed mother Sarah, and after her death in 1798, between the two sons. Each had exclusive use of certain rooms, stairways, and cellars with right of passage through some of the other rooms. The “families” lived separately under one roof, using different kitchens and entertaining rooms. The house remained divided this way through the last generation of Coffins to occupy the house. 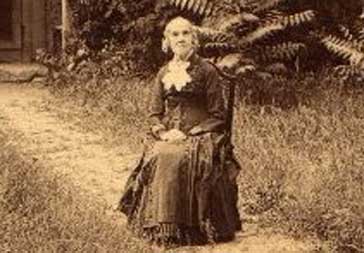 Edmund and Joseph Coffin legally divided the Coffin house in 1785, and it was their children, Joshua (1792-1864) and Lucy (1811-1893), who lived in their separate spaces through most of the nineteenth century. Joshua graduated from Dartmouth College in 1817 and taught school for many years, numbering among his pupils the poet John Greenleaf Whittier, who addressed to him a poem entitled “To My Old School-Master.” Coffin was ardent in the cause of emancipation, and was one of the founders of the New England Anti-Slavery Society in 1832, serving as its first recording secretary.

He published A Sketch of the History of Newbury, Newburyport, and West Newbury from 1635 to 1845, genealogies of the Woodman, Little, and Toppan families, and magazine articles. As an adult, Coffin lived for a time in the downstairs southwest room of the house. Meanwhile, Joshua’s first cousin Lucy (pictured) lived her whole life in the front range of the house, becoming the sole resident after the marriage of her sister, Elizabeth. 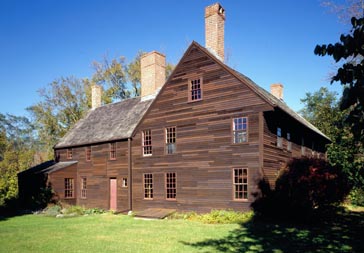 After Lucy Coffin’s death in 1893, the house passed to her sister Elizabeth’s children. The family was well aware of the importance of a house that had remained so unchanged and in the same family for so many years, but was not interested in living in the house. A series of tenants and family members lived in the house for brief periods, but in 1929, Lucy’s niece, Margaret (Coleman) Merriam, who had inherited both sides of the house, made the decision to give the house to Historic New England.

Visit nearby Spencer-Peirce-Little Farm in Newbury.

Visit nearby Swett-Ilsley House in Newbury.

More things to do in Newburyport

Newburyport is a small coastal city and a historic seaport with a vibrant downtown and a wide range of natural, cultural, and historical attractions. Newburyport shares Plum Island with Newbury, and the mooring, winter storage, and maintenance of recreational boats, motor and sail, still contribute a large part of the city’s income. A coast guard station keeps a watchful eye on boating activity, especially in the swift tidal currents of the Merrimack River. The Custom House Maritime Museum reminds visitors of the city’s history as a major port; Cushing House, home of the Museum of Old Newbury, celebrates Newburyport’s wealth of Federal architecture; and shopping and dining opportunities abound. Nearby Newbury is known for its farms and natural resources, with both the Parker River National Wildlife Refuge and Mass Audubon’s Joppa Flats Education Center serving as a hub for birders and nature lovers.

Contact the Greater Newburyport Chamber of Commerce for listings of restaurants and lodging, and many more local activities.