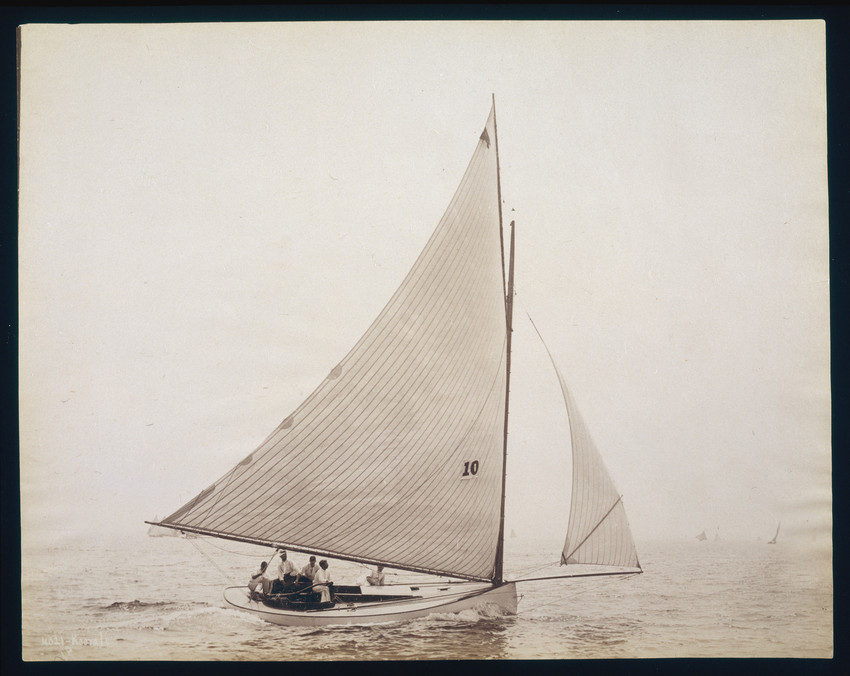 The Nathaniel L. Stebbins photographic collection is a robust collection of images of sailing vessels that were once familiar sights around Boston and New York. Over the course of Stebbins's career, sailing vessels were largely replaced by other forms of water transportation. Most of the collection consists of Stebbins's images of marine subjects, including sailing vessels (including several entrants in America's Cup races), commercial sailing craft, steamships, ferries, tugs, and fire and police boats. Boatyards and other dockside facilities are also documented. The remainder of the collection documents architectural views, with subjects including Boston buildings, streets, statues, and parks, and views of Concord, Lexington, and other historic sites.

A print finding aid is available in the Library & Archives.

After Stebbins's death, his glass plate negatives, prints, and photographic apparatus fell into the possession of Edward U. Gleason, a Boston photographer who for a few years had been associated with Stebbins. Gleason maintained possession of the materials until his death in 1928, at which point they were put up for sale with the intention that most of the plates would be recycled as panes of glass in a greenhouse. Two small collections of the plates were purchased by interested collectors; these collections eventually were acquired by the Peabody Museum of Salem, Massachusetts, and the Mariners Museum. The rest of the plates, prints, and photographic apparatus were purchased by Historic New England (then called the Society for the Preservation of New England Antiquities, or SPNEA) and came into the organization's possession on May 24, 1929.

The Nathaniel L. Stebbins photographic collection consists of approximately 2,500 original negatives and approximately 6,700 original prints. Dating from the early 1880s to circa 1922, the majority of the images depict recreational sailing vessels, including several entrants in America's Cup races. Additional types of vessels include commercial sailing craft, steamships, ferries, tugs, and fire and police boats. Boatyards and other dockside facilities are also documented. Aside from his marine photography, Stebbins had an active practice as an architectural and view photographer, working in Boston and its suburbs as well as resort areas in Maine and New Hampshire. Approximately 125 architectural views are filed with the marine materials. These images depict Boston buildings, streets, statues, and parks, in addition to views of Concord, Lexington, and other historic sites. The majority were exposed between 1900 and 1922. An estimated 1,000 negatives of an architectural or scenic nature do not have corresponding prints. This collection also contains several surveys of the exteriors and interiors of commercial, industrial, and residential buildings in Boston and vicinity, taken from 1910 to 1920.

This collection is available for research.

In 1974, with the assistance of the National Endowment for the Arts, SPNEA removed the prints from their acidic sample books and photographically reprocessed them. The intention of this act was to render the photographs chemically inert and thus increase their longevity.

This collection is entirely in English.

This electronic finding aid was originally created by Library & Archives staff in 2009. It was updated by Abigail Cramer, April, 2013.

This finding aid is DACS-compliant.

Nathaniel Livermore Stebbins was born in 1847 in Meadville, Pennsylvania to Rev. Dr. Rufus P. Stebbins and Eliza Livermore Stebbins. He was a commercial photographer in Boston from 1884 until his death in 1922. During that time, his records indicate that he created over 25,000 glass plate negatives, more than half of which were of marine subjects. Stebbins also worked as an architectural photographer, and approximately 125 architectural prints are included with the marine materials. Throughout the course of his career, Stebbins published several books on marine and naval topics, including "The New Navy of the United States" (1912), "The Illustrated Coast Pilot, with Sailing Directions" (1891), and "The Yachtsman's Album" (1896). Mrs. Katharine Stevens, a daughter of the photographer, was living in Vermont in the 1970s and supplied the following biographical material: "Nathaniel L. Stebbins was the son of the Rev. Dr. Rufus P. Stebbins, a prominent Unitarian clergyman, and, for twelve years, president of Meadville Theological School, and of his wife, formerly Eliza Livermore of Cambridge. From boyhood he had a great love of the sea and of ships. As a young man he made a voyage to South America as passenger on a sailing vessel, and this increased his longing to be always in sight of the ocean. It was in about 1882 that he became interested in photography. I was a small child but I remember well his improvised darkroom in our bathroom and the portraits of us all that he experimented with. Very soon he was ready to give his whole time to photography, and since there were few specializing in marine pictures, it was natural that he saw that field as one which offered little competition, as well as an opportunity to be on the sea. He did do other sorts of photography, in the season when the marine work was not active. Much of this was theatrical, some was for railroads, and so on.Father was a member of the Corinthian and Eastern Yacht Clubs in Marblehead and of one in Boston. In order to be in touch with yachtsmen and yachting events, he had for some years a sturdy 40-foot sloop. One year he had a yawl, and another season he chartered a steam yacht. For big races, where he had to maneuver quickly, he would charter a tug.Cameras in those days were large, heavy things, and a box of glass plates in their holders was heavier. He sometimes had a boy to help carry them to the wharf, but I can still see his rather small, spry figure balancing by the rail in the heaving bow of the boat, while he lifted the great camera to get his shot. Of course we held our breaths, for he couldn't swim a stroke.In order to produce the Illustrated Coast Pilot father passed the examinations for a licensed coast pilot from Machias to some point south of New York. Many of the photographs in that book were secured when he went on the routine trips of the lighthouse tenders, by permission of the United States Lighthouse Board."

The collection is arranged into four series: 1. Glass plate negatives, 2. Prints, 3. Day books, and 4. Lists, correspondence, and collection information. The materials are indexed alphabetically by vessel name; this index is available in print in the archives.