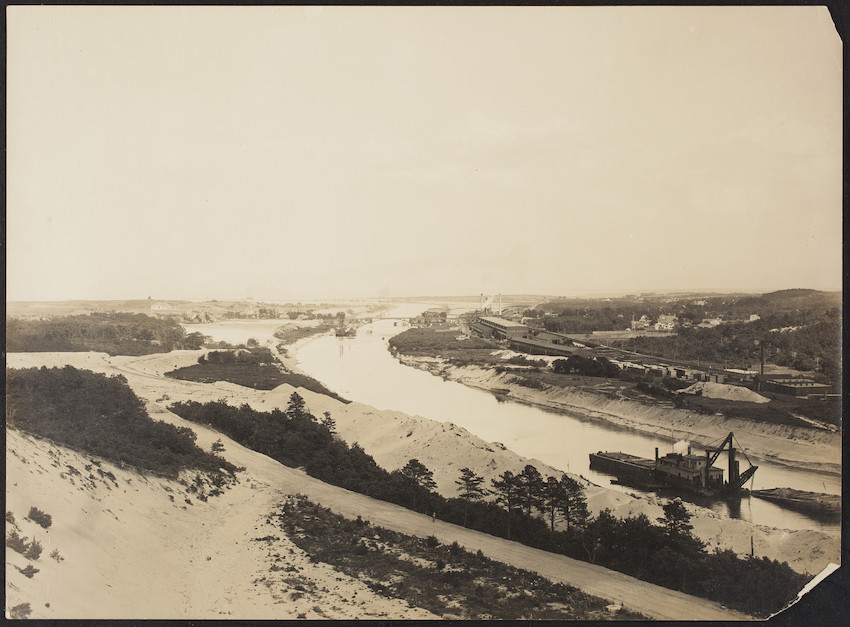 This collection documents the history of the Cape Cod Canal from its construction in the early 1910s to the early 2010s. The materials in the collection date from 1827 to 2015, with the bulk of the material dating from the 1910s to the 1960s. The collection consists of photographic prints, photograph albums, postcards, lantern slides, memorabilia, brochures, toll schedules, decals, maps, matchbooks, menus, placemats, stock certificates, government publications, periodicals, and more. See series descriptions for details.

The collection was created by Mrs. Webber through multiple acquisitions of individual items or small groups of items over the course of years. Mrs. Webber has had a lifelong interest in the Cape Cod Canal and in collecting, and she enjoys making historical materials available to the public through museums, archives, academic institutions, and historical societies.

Gift of Nina Heald Webber, multiple donations between 2006 and 2015.

This collection is available for research.

The books that were donated as part of this collection have been removed from the collection and transferred to the Historic New England Library & Archives book collection.

Materials are entirely in English.

This collection was originally processed by Historic New England intern Dominique Ledoux, 2013; it was updated by Librarian/Archivist Abigail Cramer, January, 2014 and February, 2015 and further updated in 2017 by Archives Manager Cristina Prochilo.

The Cape Cod Canal was first proposed in 1623 by Miles Standish as a means to avoid the treacherous sailing conditions around Cape Cod. In 1776, George Washington ordered the first survey of the area, but little progress was made. Additional unsuccessful attempts to initiate the construction of a canal were made, including by the Cape Cod Ship Canal Company, but it was not until 1909, under the direction of August Belmont and with the engineering leadership of William Barclay Parsons, that the Boston, Cape Cod, and New York Canal Company began to make progress in earnest. Over the course of five years, the Company changed the landscape, roadways, and railroads; faced numerous hardships due to equipment failures, flooding, and unanticipated obstacles; and ultimately opened the Cape Cod Canal in 1914.

In 1918, the strategic importance of the Canal became apparent to President Woodrow Wilson, and the United States government took control of it for the duration of World War I. After the war, negotiations with Belmont continued until 1928 when Congress authorized the purchase of the Canal. The Army Corps of Engineers executed a number of improvements to the Canal, including building three new bridges which opened in 1935 and deepening the Canal by 1940. The Cape Cod Canal continues to be a vital resource for industry and leisure today.