A collaboration to restore the Gropius Orchard 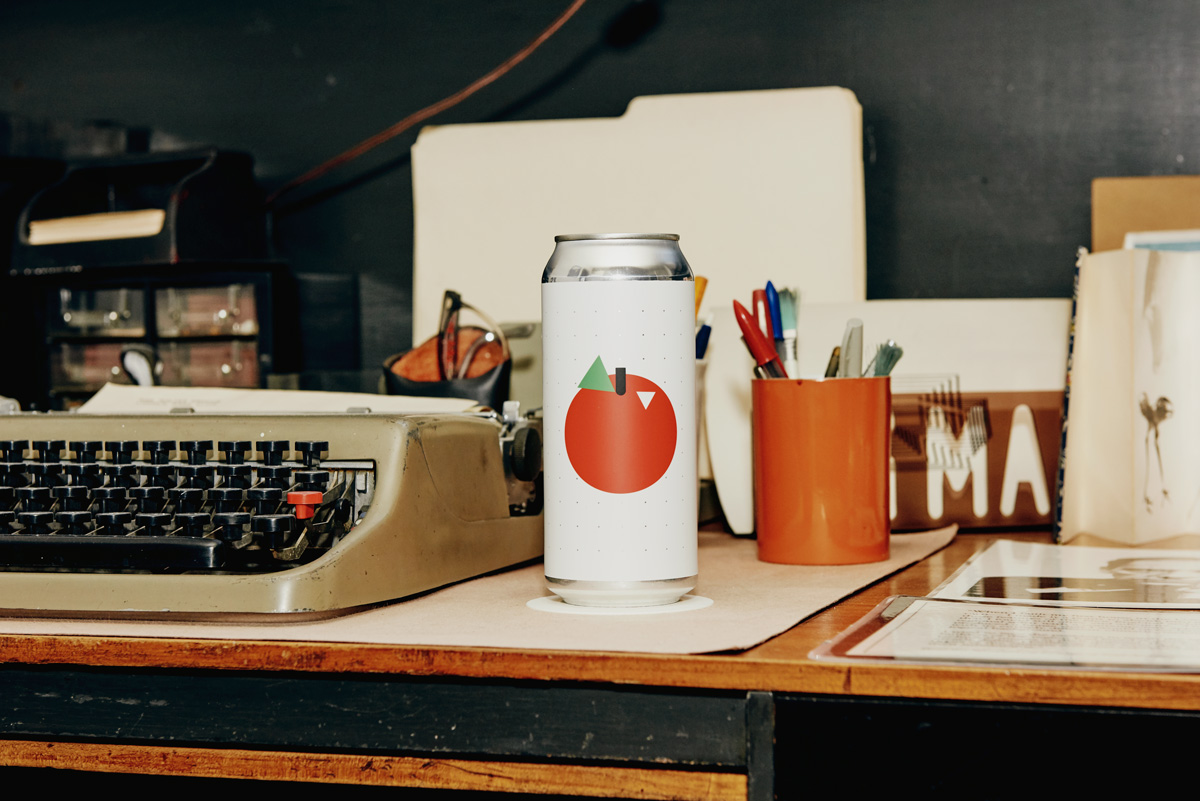 This year marks the centennial of the Bauhaus, the German design school founded and led by Walter Gropius. Walter Gropius’s vision for the Bauhaus movement called for bridging the gap between art and industry by combining crafts and fine arts, extending beauty to the everyday through well-designed industrially produced objects. Though it’s tenure was short, curtailed by the rise of the Nazi regime, the influence of the Bauhaus lives on as one of the most influential art and design schools in history.

Gropius fled Germany in the 1930s during the rise of the Nazi regime, and his family eventually landed in Massachusetts. It was there he designed and built what today is known as the Gropius House. Gropius built his home among a productive Baldwin apple orchard, carefully integrating the orchard, meadow, and natural stone walls on the property into his home. Honoring the Bauhaus spirit of teamwork, Gropius House Cider is a collaboration among Historic New England, Shacksbury Cider, and Loyal Union, whose design team visited Gropius House and was inspired to help preserve it. Now one of Historic New England’s most popular museums, the house welcomes thousands of visitors each year from all over the world to experience Gropius’s revolutionary design. Proceeds from the cider will benefit Historic New England’s efforts to restore the apple orchard that originally surrounded the house. Help us plant new trees with root stock identical to the original Baldwin apple trees. 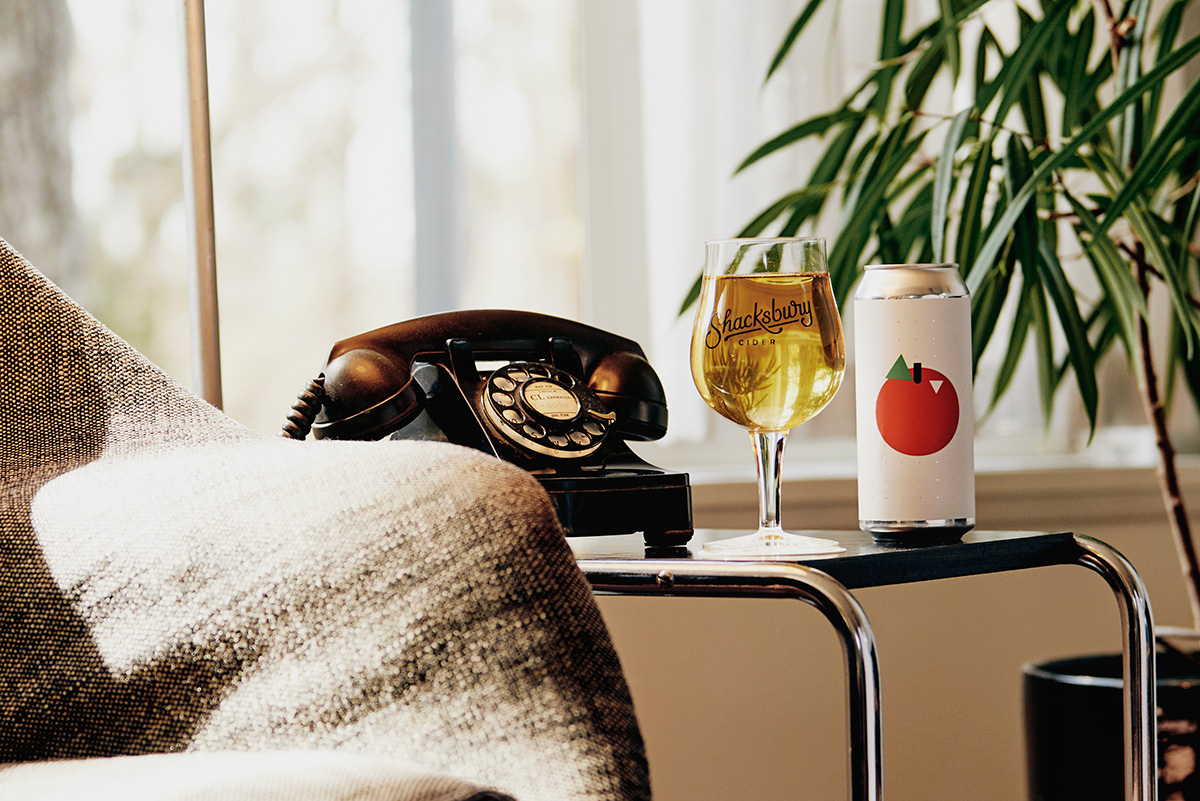 Gropius House Cider celebrates simple ingredients — Vermont cider, aged in gin barrels, sweetened with just a touch of honey — and a refined result. This crisp and refreshing cider draws its inspiration from the teachings of Bauhaus, and from the intimate dinner parties and gatherings the Gropiuses often hosted at their Lincoln home. 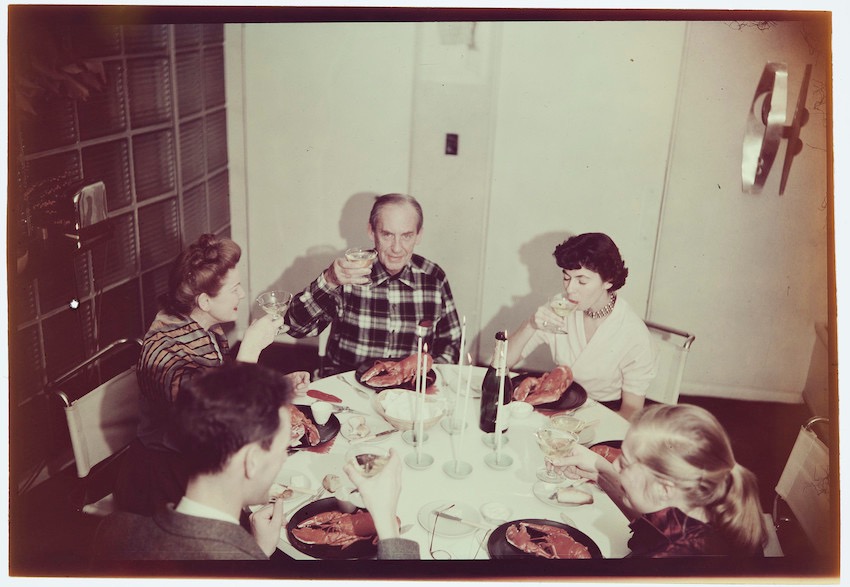 Every detail of the Gropius home was thoughtfully designed — down to the smallest items, such as the candle holders and butter knives. Ise Gropius often gathered natural cuttings of the surrounding trees, shrubs, flowers, and twigs, arranging them throughout the home. The home blurs the lines between indoors and outdoors, celebrating the relationship between the natural and built environments. 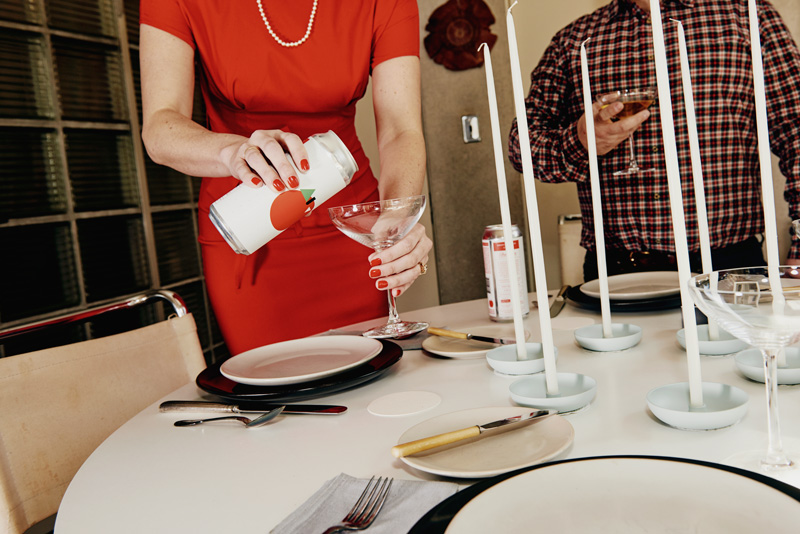 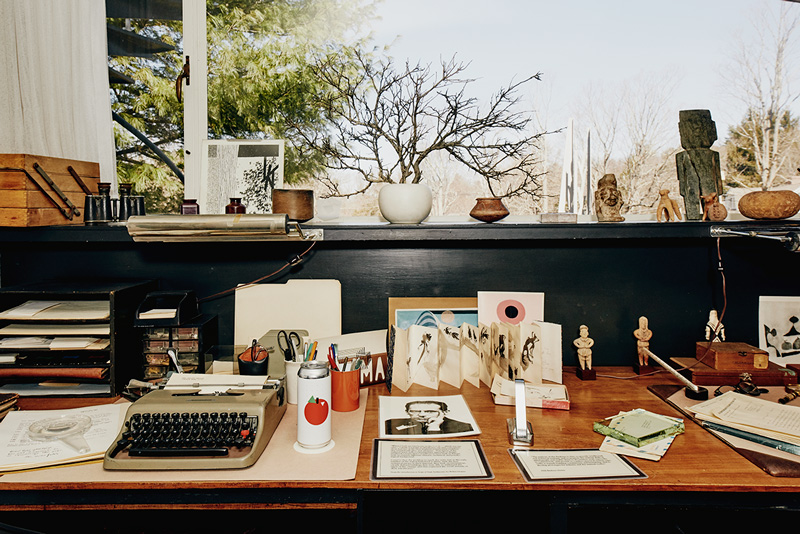 Photographer Tony Luong paid homage to an original photograph of Walter Gropius and guests enjoying drinks and a New England staple, lobster, around the dinner table. Our aim was to celebrate the traditions of these elements (the home, the cider, and the “snapshot” aesthetic) all the while preserving the integrity of what Walter intended the house to be and act as a backdrop to these images. Reimagining what a night would be like at the house, the photographs tread the line of serendipity and staged and are meant to act as a timeline of a night by way of the cider. 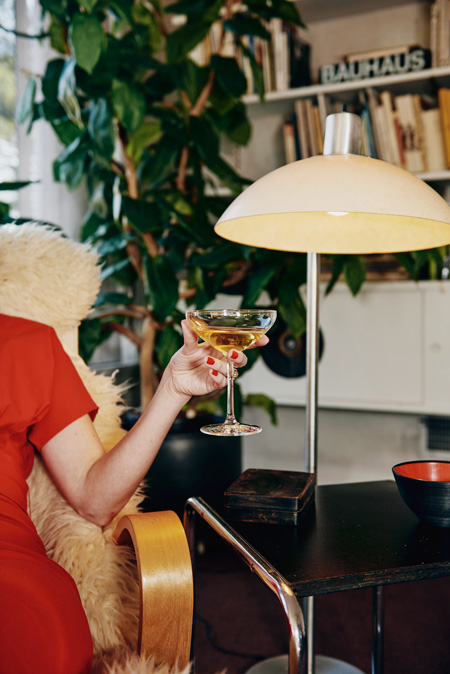 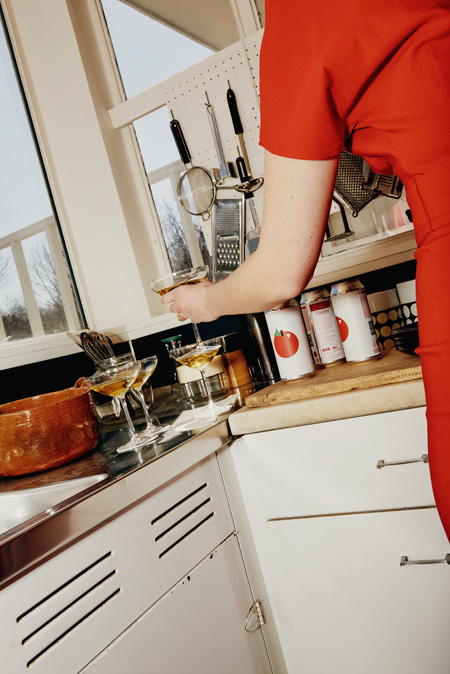 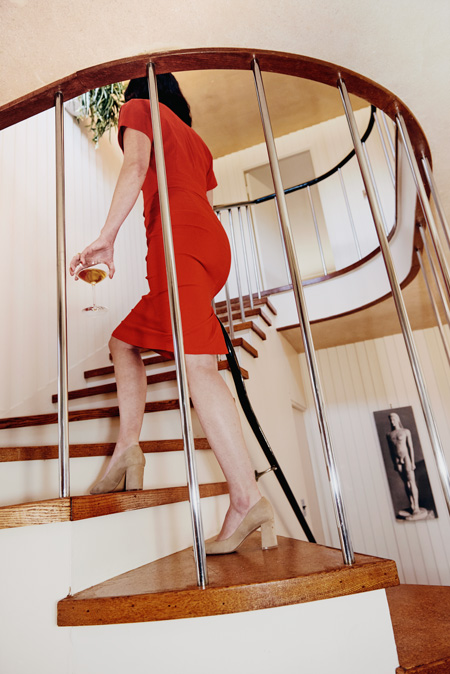 The label was designed by Ryan Habbyshaw and Noah Venezia based on Bauhaus principles: Use simple production methods, embrace function, and eliminate ornament. The apple was constructed using the simplest forms possible accompanied by a 10 cm grid of aluminum dots referencing many of the forms and surfaces found in the Lincoln home. 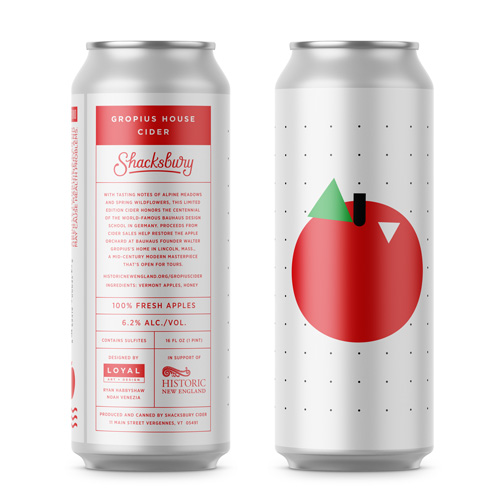 Since 2012, Shacksbury has been hard at work seeking out wild apple trees and forgotten orchards throughout Vermont and New England, aiming to restore the region’s history of rich, diverse apple cultivation. 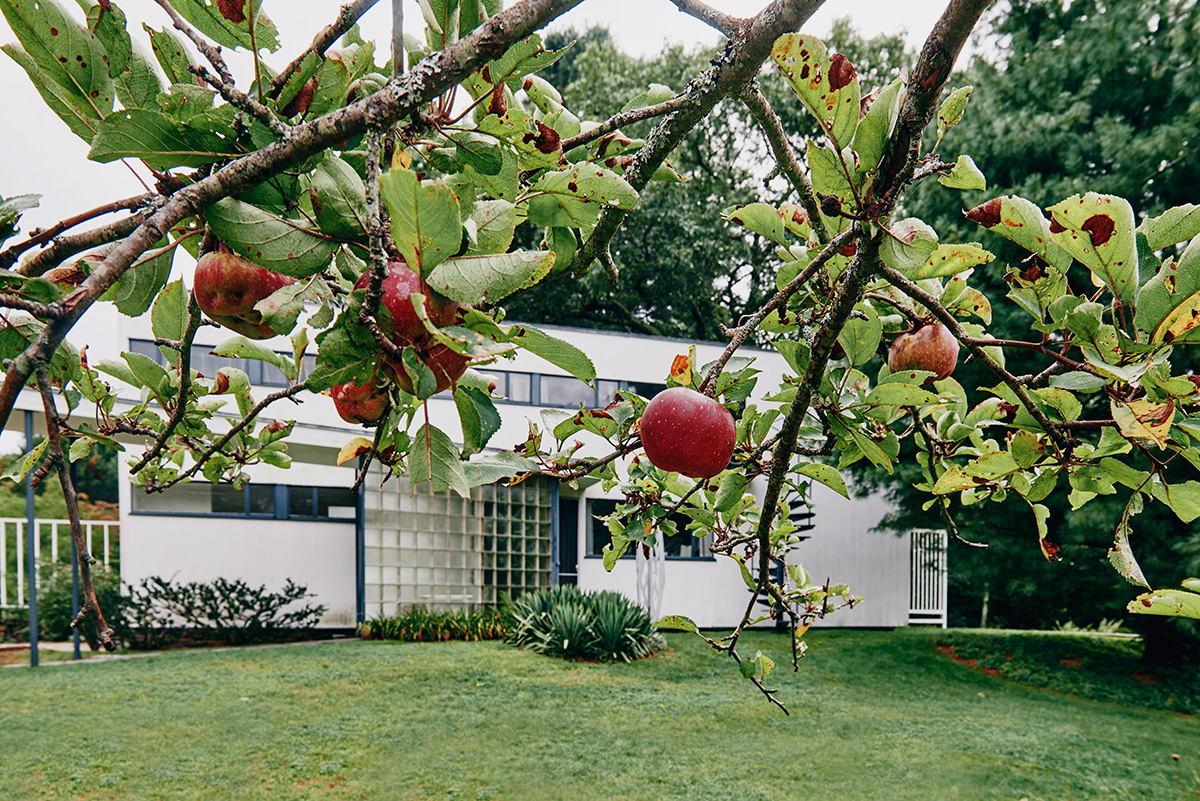 Under trees, the urban dweller might restore his troubled soul and find the blessing of a creative pause.

To everyone who made this project possible, our deepest thanks