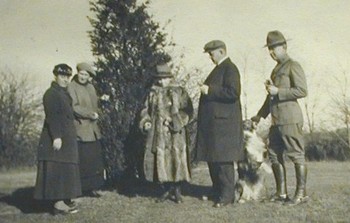 The original 16mm film reels were gathered from various locations in trunks and boxes and sorted into three separate collections based upon the address written on the reel box and other items that were stored in the trunks or boxes. The three collections are: The Stephen Phillips Film Collection, The James Duncan Phillips Film Collection, and the Professional Film Collection. Once each reel had been separated into a collection, the films were organized chronologically by year. If the box was not labeled with a year, the edge codes stamped on the edges of the film provided the year of the film stock's manufacture. This gave an approximate date to the footage recorded on the film. In most cases, the film was used within a couple years of its manufacture date. Once in chronological order, each reel was assigned an Archives Film (AF) number, given a visual inspection and condition report, and all of the handwritten material on the reel boxes or cans was recorded.Of the 210 reels gathered, 11 reels had to be discarded due to extreme mold growth and rust. The remaining 199 reels of film were transported to Northeast Historic Film (NHF) in Bucksport, Maine for conservation. The conservation work was funded in part by a grant from the Institute of Museum and Library Services (IMLS). The technicians at NHF cleaned each reel and transferred the film to archival cores and stored the newly conserved film in archival film cans. Once the conservation work was complete, the museum received a grant from the Essex National Heritage Commission (ENHC) to transfer the reels onto a Beta SP master copy and a DVD viewing copy. Of the 199 reels conserved, 193 reels were transferred to DVD viewing copies. Five of the reels were unable to be transferred due to shrinkage, and one reel was comprised of unprocessed film, that needs to be developed before it can be viewed.

Much of the color film has turned magenta with a few exceptions.

Stephen Phillips, the only child of Stephen Willard and Anna (Wheatland) Phillips, was born in Salem, Massachusetts in 1907. He attended Harvard College as the previous four generations of Phillips men had done before him. He studied history and after graduating in 1929, he hoped to become an archaeologist, but ill health prevented him from doing so.Like his uncle, James Duncan Phillips, Stephen enjoyed taking home movies and his earliest films were shot circa 1928, while he was still at Harvard. The summer after graduation Stephen and several friends took an automobile trip through the Canadian Rockies, the Northwest, and the Grand Canyon, capturing their adventures on motion picture film. Stephen's European travels included Germany, Paris, and London and after he was diagnosed with tuberculosis, he spent time in sanatoriums in Switzerland in 1931 to 1932.Although he never became the archaeologist that he intended, Stephen's interest in history and historic preservation remained throughout his life. He became a trustee of the Essex Institute in Salem and helped save several historic homes in the city. In his will, Stephen intended his parents' house at 34 Chestnut Street to be opened as a museum. Stephen's wife, Betty, took up the challenge. She opened the Stephen Phillips Trust House to the public in 1973 and ran it for the next 23 years until her death in 1996. Today, thanks to the foresight of Stephen Phillips and his wife, the Phillips House and its collections, including the three film collections, are preserved and made available to researchers and to the 4,000 visitors who are welcomed seasonally every year. Source: Phillips Family Film Collection finding aid.James Duncan Phillips, second son of the Honorable Stephen Henry and Margaret (Duncan) Phillips and uncle to Stephen Phillips, was born in San Francisco, California in 1876. He attended Harvard College as had the two previous generations of Phillips men and graduated in 1897 magna cum laude. Less than one year later he joined the publishing firm of Houghton Mifflin Company and worked there until his retirement in 1941.Mr. Phillips married Nannie J. Borden of Fall River, Massachusetts in 1907, with the wedding taking place in England. They traveled widely both before and after marriage. In the late 1920s Mr. Phillips added home movies of their trips to the photographs and extensive journals that they already kept of their travels.Due to a serious heart attack in 1936, his business activities became limited. He filled his time with historical research and writing. Numerous articles and books, most of which were about Salem's "Great Age of Sail," were published during the last twenty years of his life. Source: Phillips Family Film Collection finding aid.

The summary by catalogue number lists the films by AF number and by DVD. The AF numbers are organized by collection, the first collection, (highlighted in yellow) was created by Stephen Phillips (1907-1971), the second collection (highlighted in blue) was created by James Duncan Phillips (1876-1954), the third collection (highlighted in green) was created by professional film companies and corporations. The original film title that was written on the box (if any) is notated first in "quotes". When there was no title written on the box the museum staff created titles for the unmarked reels based on the footage contained on the film-these titles are notated second in [brackets]. In some cases, the handwritten title on the outside of the box did not match the footage recorded on the reel. This is notated in (parentheses) between the original title and the museum title. The Summary by catalogue number lists single reels in black ink and groups of reels by different colored ink. The colored ink reels are groups of films that were taken on a trip to a particular place by the creator. For example, Stephen's 1930 Germany trip and James Duncan and Nannie Phillips' 1930 trip from Capetown to Cairo. A more detailed finding aid, listing specific people and places is available for research upon request.