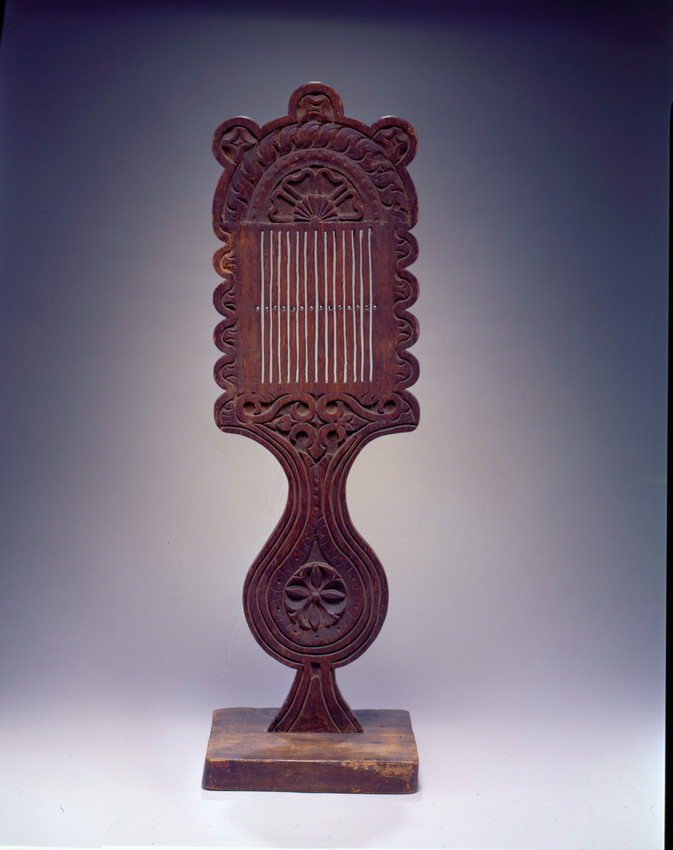 Arched crest with three projecting half-circles carved with curve-sided devices, crest carved with "S" and circle motif, concentric band of dots and half "flower" device; over pierced loom section which is flanked by carved scalloped border; base is baluster-shaped carved with foliate scrolls, grooves and flowerhead; plain square maple foot.

Tape looms were used by weavers, men or women, who held the looms between their knees as they worked. The looms produced strips of fabric called tapes roughly an inch wide, that could be ornamental or plain, and were used for everything from garters to binding. Like the carved box nearby, the tape loom is part of a group of carved seventeenth-century objects that is thought to be the product of two joiners who worked in Ipswich, Massachusetts, in the second half of the seventeenth century, William Searle (1611-1667) and Thomas Dennis (1638-1706). Dennis probably trained with Searle in Ottery St. Mary, Devonshire, England, before the two immigrated to New England.

NFL jelly label in red ink at side of base: ""18.19 [old accession number] Tape loom attributed to Thomas Dennis of Ipswich 17th century"".