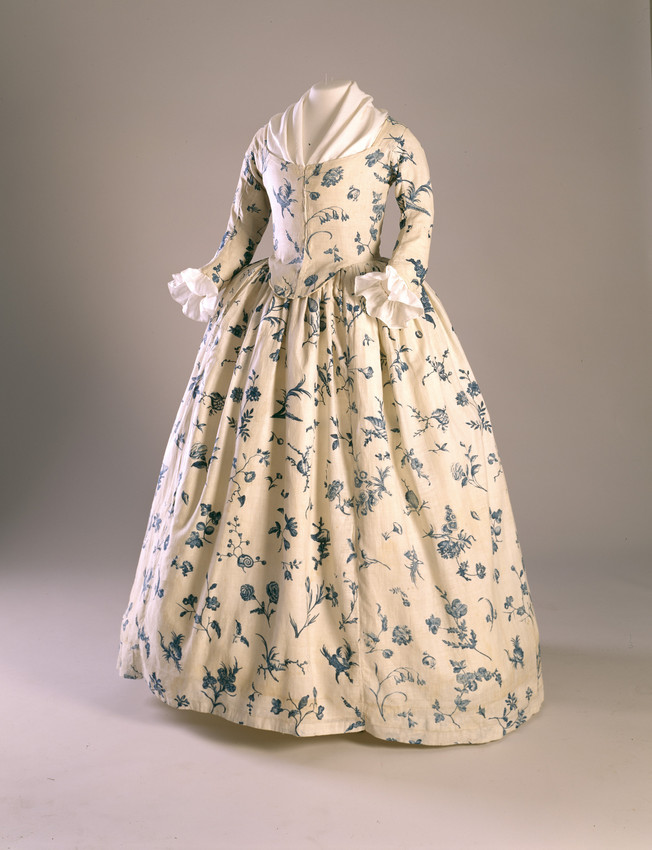 This gown was originally made as an open robe--meant to be worn with a petticoat--most likely in the 1770s. It was re-made into a round gown--the skirt was closed across the front--sometime in the mid to late 1780s. The gown is constructed from plainweave linen plate-printed in indigo with a repeating pattern of floral sprays and seashells. It was altered again, probably in the late nineteenth century, to add a row of metal hook and eye closures down the center front of the bodice. The back of the gown is constructed a l'anglaise, but without a forreau back, which is another indicator of a late 1780s to 1790 alteration. Sleeves are 3/4 length, altered to remove the self-fabric ruffles, which appear to have been ironed out and pieced into the skirt (see interior near waist) and lengthened. The bodice is lined with two types of coarser, unbleached linen. Other nineteenth-century alterations included shortening the hemline and adding lace ruffles to the sleeve cuffs (which were later removed during conservation). The gown has a reproduction plain muslin kerchief and sleeve ruffles.

Deborah Sampson Gannett (1760-1827) led a life that, with one extraordinary exception, was typical of impoverished women of her time. Born to farmers in Plympton, Massachusetts, she worked as an indentured servant from the age of ten until she enlisted in the Continental Army as a man, first giving her name as Timothy Thayer then as Robert Shurtleff, in 1782. Wounded in Tarrytown, New York, Deborah avoided discovery for eighteen months, when she contracted yellow fever and received an honorable discharge in 1783. By 1792 she had successfully been granted her back pay for service in the Massachusetts Fourth Regiment. Her tale appeared in print, as The Female Review: Or, Memoirs of an American Young Lady, in 1797. By 1802 she was on tour to talk about her experiences, completing her performance with an elaborate military drill in uniform. She received support for her pension application from Paul Revere, a personal friend. This dress, a style known as a "round gown" for the closed skirt in front, is an updated 1780s version of an earlier gown. The dress remained in the family until 1998. Family history identifies it as Deborah's wedding dress.