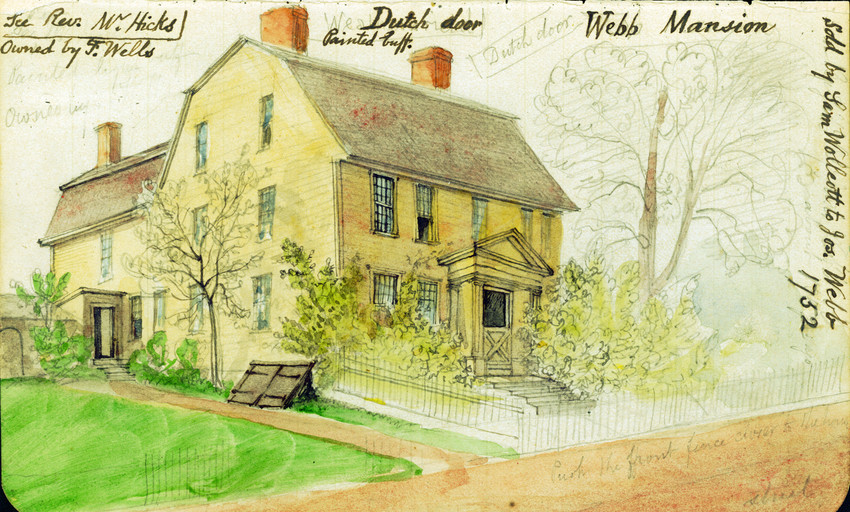 In the 1860s, after nearly thirty years of traveling throughout Canada and the United States for the purpose of sketching architectural structures and landscapes, artist Edwin Whitefield settled in Massachusetts. From there he commenced the huge undertaking of visually recording hundreds of historic houses in New England, a project that culminated in his publication of the series, "The Homes of Our Forefathers". The artist captured these colonial-type homes, built in the seventeenth and eighteenth- centuries with the highest attention paid to detail and precision. In his introduction to the 1886 volume of "The Homes of Our Forefathers", Whitefield stated that he purposely chose pencil and paintbrush rather than a camera for the depiction in order to show the buildings as they had originally been built and not with the alterations which had come about in the nineteenth-century.

The collection consists of eighteen sketchbooks, fourteen file folders, a folder of loose unbound (some mounted) watercolors, and nine copies of "The Homes of Our Forefathers" (three volumes appear in duplicate). The collection also includes correspondence and examples of Whitefield's writings.

Whitefield divided the sketchbooks by states: in each he put the heading of a town on a page and underneath provided an illustration of one of the houses to be found in that town. In many cases, sketches have been made on a separate sheet and then pasted into the appropriate slot. In some cases, Whitefield indicated the date on which the drawing was made (for example, in Book 1, dates attributed to various sketches are 1880, 1883, and 1887).

He also preferred to use artistic license to omit trees and other obstructions that might obscure important features of the houses.

Whitefield was deeply interested in the history of the houses he drew. He talked with the residents and searched for deeds in county registers throughout New England for verification of dates and names. In the margins of the sketches, he wrote annotations concerning the house name, builder, owner, date of building, and other pertinent information such as significant historical persons connected with the structure. Some of the homes were later destroyed in the development of the early-twentieth century tenements, and his drawings and lithographs became a valuable record and often the only one left of these homes. An article in the "Boston Journal" in 1889 praised Whitefield's sketches of the houses with the comment that "We cannot easily exaggerate the service which Mr. Whitefield has rendered in preserving them."

Edwin Whitefield was a nineteenth-century artist, traveler, speculator in new lands, teacher, publisher, and inventor. His chief ambition was to leave a pictorial record of the most historically important cities and towns in America. Having always felt a "great interest in antiquarian matters generally and the early history of the New England particularly," (introduction to "Homes of Our Forefathers", 1886) he commenced his last project in the early 1860s, a work that culminated in the publication of the multi-volume "Homes of Our Forefathers", a document that inspired interest in the preservation of New England houses for their historical and architectural merits. Much of what is known about Whitefield is gleaned form the detailed journals and diaries that he left.

Edwin Whitefield Pennie was born on Septermber 22, 1816 in East Lulworth, Dorset, England. He was christened in the local Church of England on June 30, 1820. His father was a schoolmaster, and it is believed he was taught at home and had no formal eductation. He married his first wife, Maria, around 1833 when he was seventeen. Around September 1835, he left his wife and son and may have first arrived in Canada. He is known to have taught in Canada and married his second wife, Kate, who was a schoolgirl there.

Whitefield arrived in the United States from the South of England around 1837 as a self-trained artist. His family had expected him to be a doctor or lawyer and, wanting to be an artist, he fled to America (notes of Abbot Cummings in the Whitefield Collection, Folder 10: "Facts communicated to me in the late 1950s by his granddaughters."). The nineteenth century had a tradition of itinerant topographical artist/journalists, most originating from England, and Whitfield joined this path. Until 1853 he traveled from town to town along New York's Hudson River, soliciting commissions for his sketches of landscapes and residences and producing flower lithographs for book illustrations. His commissions were supplemented by stints at teaching drawing. During this time he published city views of such locales as Albany, Brooklyn, Niagara, Philadelphia, and Salem.

In 1853, he separated from his wife and, settling his children in Canada, continued to travel and to solicit commissions for his drawings. Soon he could boast of having completed nearly 2,000 views of Canada and the United States. In 1856, Whitefield moved to Minnesota and joined a speculative land company whose purpose was to encourage settlement of the new territory. His travels and sketching continued, with a major tour made back East to promote the benefits of investment in Minnesota. In 1858, Whitefield settled in Kandotta, Minnesota with a new wife, but was soon off to Springfield, Illinois and St. Louis, Missouri with commissions to sketch residences and steamboats. Three years later, he and his wife moved to Chicago, Illinois so he could work on commissions in that city.

In 1863, Whitefield started East, first publishing maps and teaching drawing in Canada, then settling in Reading, Massachusetts and working on views of Roxbury and Boston. The last twenty years of his life were devoted to the series of books on New England colonial houses, the project for which he is best known. The five volumes of "The Homes of Our Forefathers" were published between 1879 and 1892, and it is in the sketchbooks, housed mainly at Historic New England and at the Boston Public Library, that his preliminary renderings were made as studies for the lithographs that comprised the published volumes.

Other projects in which Whitefield was involved included the inventing of a method for stamping embroidery patterns on cloth called "Notosericum" (patented in 1867), mapmaking, and, in response to the popular Victorian drawing room pastime of playing cards, the production of a series of patented drawing cards displaying eight interchangeable scenes along the Mississippi River.

In 1888, Whitefield and his wife sold their Reading home and left for an extended stay in England and Scotland. Not long before his death in 1892, Whitefield returned to Massachusetts, living briefly in Roslindale and then with his daughter in Dedham.

The collection is arranged by state. The method item-by-item indexing of the houses is by name and locality. The correspondence is arranged ascending in chronological order, with undated material at the end.