Sift through Historic New England’s extensive collection of photographs and it won’t be long before you come across a “carte de visite.” Made from portraits mounted onto cards, these small keepsakes were often traded during visits between friends and family members in the 1860s and 1870s. Creating and exchanging these pictures became so popular, in fact, that media outlets coined the term “cartomania” to describe the widespread trend.

During the Civil War, cartes de visites evolved from simple forms of social currency into powerful, politically persuasive images. In the North, pictures of Union soldiers and President Abraham Lincoln joined people’s collections alongside portraits of their friends and family members.

Although portraits of African American people have been in the Historic New England carte de visite collection for almost a century, we know little about most of the individuals in the photographs. Collecting, preserving, and presenting black history was not an early priority of many historical institutions. Due to a prior focus on the “great men” of American history, locating and understanding black stories within archives is sometimes a difficult task.

While many census, marriage, and death records are available online, birth years and spelling of names of African Americans are often inconsistent. This makes research more challenging, as the narratives are buried in records written by, and focused on, white, often wealthy, men and women. Additionally, many early histories of African Americans are outdated; they usually focus on a paternalistic relationship between black and white individuals. While it may be more challenging to locate black narratives in archives, it is important that we do so, as we look to a more inclusive understanding of our past. 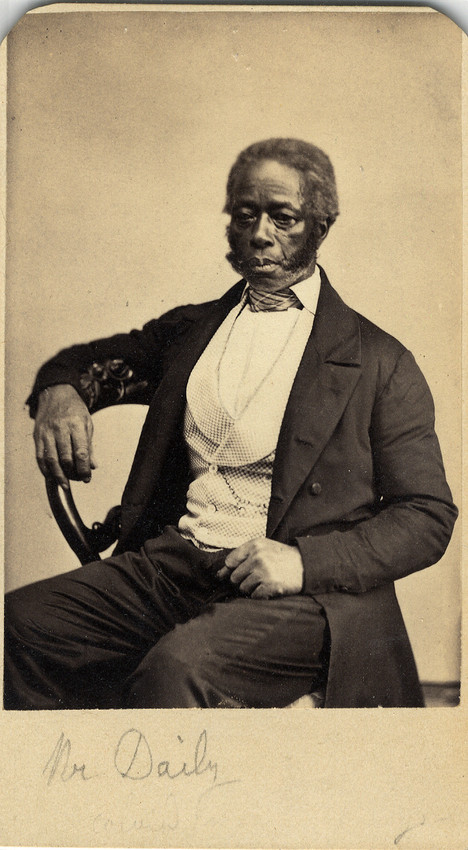 Robert Daley (possibly Daily or Dailey) was born in 1801 in New Hampshire. He later moved to Salem, Massachusetts, where he worked as a porter. Robert married Mrs. Hannah Munroe, possibly a widow, on September 25, 1842. Hannah and Robert continued to live in Salem, where Robert worked as an expressman, which may refer to anyone who has the duty of packing, managing, and ensuring the delivery of cargo and goods. The inscription on the carte de visite notes that Robert was also a choirman from 1850 to 1860. In 1865, Robert is listed as a legal voter in the Massachusetts State Census. Robert died of dropsy at the age of sixty-six in 1867. 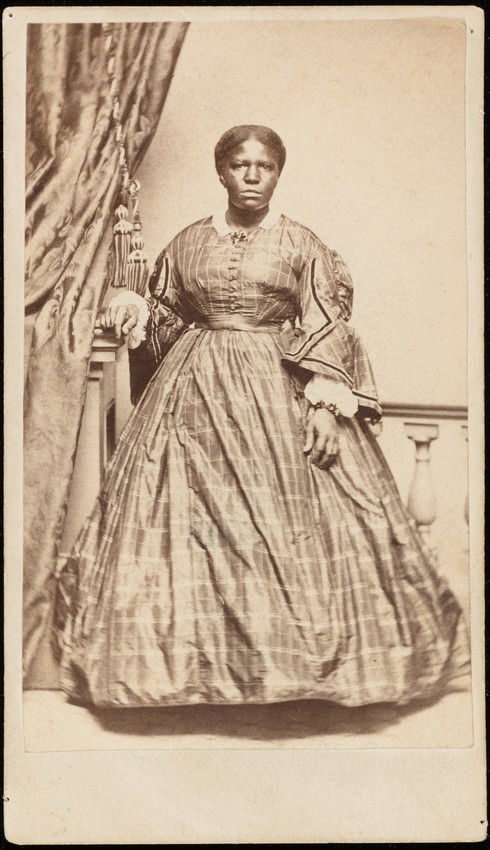 Sara Baro Colcher was born in Africa between 1835 and 1840 and was captured by slave dealer Don de Mer when she was a child. Although the United States outlawed the international slave trade in 1808, according to an article in the October 1925 issue of Old-Time New England, de Mer traveled on Magadala, a ship operated by Captain Austin Dodge of Massachusetts. De Mer died while on the voyage, and Captain Dodge took Sara to his sister, Elizabeth Conant, who lived in Topsfield, Massachusetts, with her husband, Nathaniel.

Although the Old-Time New England article states that Colcher was educated and well taken care of within the Conant household, her true status in the home remains unknown. By 1860, Colcher was living in Boston, with John McLellan, an auctioneer, and his wife, Catherine. While Colcher’s occupation is not listed in the 1860 census, it is likely that she was boarding in the McLellan household and was employed as a domestic worker.

According to Old-Time New England, Sara worked as a cook in the home of Mrs. Gordon Dexter, of Boston and Beverly Farms, Massachusetts. Sara became ill while working for Mrs. Dexter, and was brought to the Cabot-Lee-Kilham household in Beverly, where she was cared for by Miss Henrietta Kilham. Miss Kilham donated the carte de visite to Historic New England, then the Society for the Preservation of New England Antiquities, in November 1925. Sara died in 1882, and is buried in the Conant family plot in Topsfield.

Throughout this research process, we noticed many inconsistencies with the primary sources. Robert Daley was labeled as “Robert Daily” on the carte de visite, but records have him listed as Robert Dailey, Daly, and Daley. Sara Baro Colcher is listed as being twenty years old in both 1855 and 1860, and her name is occasionally spelled “Sarah.”

Additionally, early biographies of Sara are now outdated. For example, the 1925 Old-Time New England article uses very neutral language when saying, “Sarah Baro Colcher was given to Captain Dodge, who brought her home to his sister, Elizabeth Dodge Conant.” Without any firsthand documentation, Sara’s social and legal status remains unknown.

If you know of any possible resources or information about Robert Daley and Sara Baro Colcher, please email us at [email protected]. Thank you!