What lies beneath: Uncovering upholstery in the conservation lab 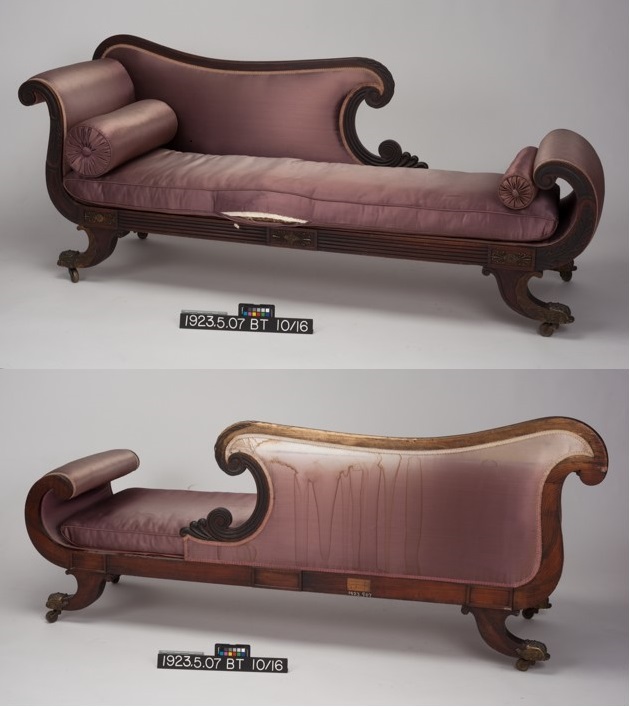 A purple puzzle recently came to the conservation lab at Historic New England. New information about a Recamier (couch) that long sat in the stairhall of the Otis House Museum in Boston has been uncovered.

A signature by Thomas Wightman, a famed carver of the early nineteenth century with ties to the Seymour Brothers and Isaac Vose, was found on the inside edge of one of the seat rails. Closer examination showed that the exceptional carvings on the couch were originally gilded and later intentionally covered with a pigmented varnish or paint, which hid their appearance.

We brought the couch to our Haverhill, Massachusetts, lab to restore it to its former glory in preparation for an upcoming exhibit at the Massachusetts Historical Society in 2018 curated by Robert Mussey and Clark Pearce.

The first step in any conservation treatment is to investigate written documentation and records to help understand the history of the object. Within the collection files there were two important records: a brief note telling of a 1936 re-upholstery campaign and a square of the original red velvet with a blue base fabric. These helped our conservators and curators begin to unravel the history of the sofa.

We noted that the current purple show cover was severely degraded, particularly on the back of the couch, where there was extensive damage from both water and light (figure 1). The initial treatment plan was to remove the later show cover and upholstery materials, replace them with museum-grade materials, and apply a more period-appropriate show cover. However, removing the modern upholstery also allowed the conservators to get a good look at the bones of the piece to understand its construction, history, and previous restorations. 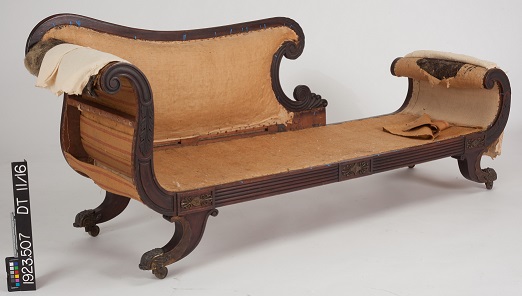 The de-upholstered sofa showing the original horsehair and linen on the back and arms of the piece.

What we found has significantly altered the treatment goals. Not only is there evidence of what might be the original show cover material, but the original under-upholstery is present as well.

Discovering original horsehair stuffing and linen under cover fabrics is incredibly rare. Hygiene laws passed at the end of the nineteenth and early twentieth centuries required stripping upholstery to the bare frame when replacing show covers.

Because we now have strong evidence that this material is original to the couch, our treatment goals have changed to retain, stabilize, and preserve this important piece of history. While there are certainly more mysteries to unfold as we dig deeper into the history and treatment of the Recamier, one thing is certain: this treatment will be an interesting one!

Keep an eye out over the next few months for updates on the progress of this unique piece. To support conservation work like this, please consider a donation to the Collections and Conservation Fund.