We dug up the oldest dirt in Boston 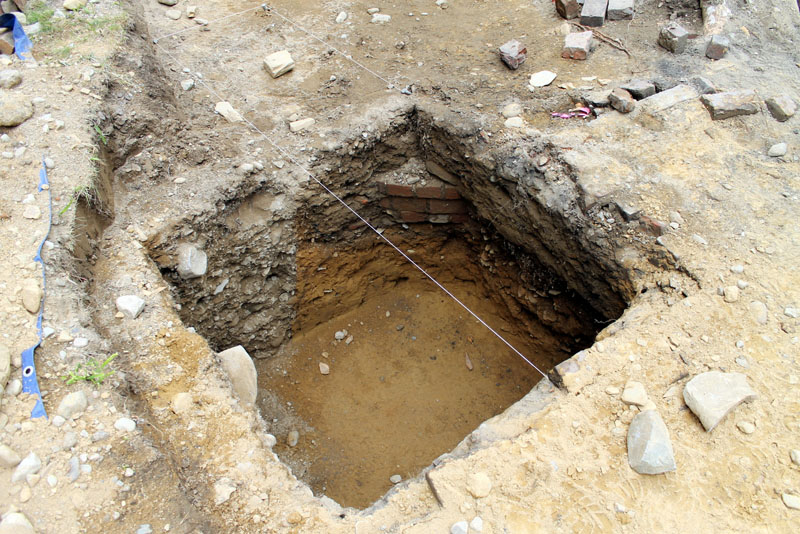 Historic New England’s Otis House in Boston sits on land that was part of the earliest English settlement in the city. Before beginning preservation work that disturbs the grounds, we must conduct an archaeological survey. The most recent survey revealed a surprising find: no less than some of the oldest dirt in the city.

We expected that any resources buried in the Otis House grounds would have been discovered in 1976, when a large stair tower was built at the back of the property. Nevertheless, in advance of repairs to a nearby retaining wall, we performed three rounds of archaeology in the excavation area.

Round one unearthed two features of unknown origin and purpose: one looked like a thin brick wall and another seemed to be a brick patio. These findings called for an additional round of archaeology, which uncovered possible slate paving stones underneath the brick patio.

Some uncovered artifacts in this area dated to the late eighteenth century, a development that required a third round of archaeology. This final round exposed even more features. We don’t yet know what the features are or what their significance might be, but one discovery was clear. In an area of just 300 square feet, on land that has been occupied since the seventeenth century, in a neighborhood transformed by twentieth-century urban renewal, intact subsoil was found.

What is “intact subsoil?” It is a layer of soil that has not been seen or touched since at least 1630. In fact, this subsoil was likely undisturbed for years before 1630, because it held no traces of Native American artifacts.

The Boston landscape is a small peninsula that has undergone significant infill over the past 384 years. It has sustained many generations of development on top (and some subway and highway tunnels underneath).

The discovery of such intact subsoil in Boston is rare. The only other documented area where this kind of soil has been found is somewhere on the Boston Common. Originally a communal grazing land, the Common has areas that have never been developed, so the discovery of intact subsoil is relatively easy to imagine. But such a discovery in Boston’s West End is a real surprise.