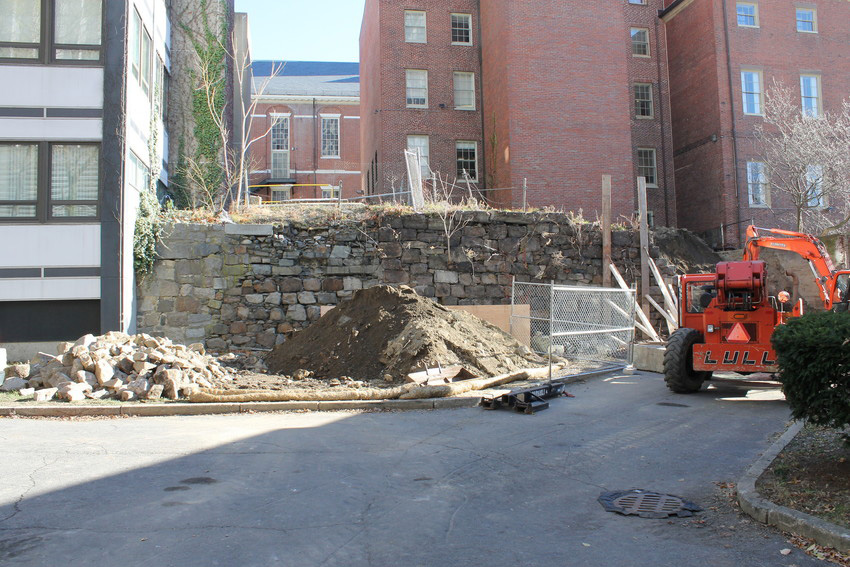 Just before the February snowstorms, Historic New England completed restoration of the retaining wall at Otis House (1796) in Boston. To the casual observer, this project might not look as exciting as a roof replacement or the restoration of historic paint finishes. However, this critical infrastructure repair continues to reveal new mysteries about the historical development and subsequent deterioration of the wall.

This wall marks the western boundary of the property owned by Harrison Gray Otis in the late eighteenth century. While evidence of the wall’s exact date of construction continues to elude us, the cut in the hill that necessitated it must have been a significant event in the growing West End neighborhood.

Prior to repair work, archaeology revealed various components of early water and drain systems in the area between the wall and the rear of the c. 1820 buildings that face Lynde Street and now form administrative offices for Historic New England. Artifacts uncovered during the restoration point to a possible construction date not much later than 1815.

We were surprised to uncover cast iron drain lines during the project. Based on their location, these drains may have been incorporated into work associated with the 1925 widening of Cambridge Street, during which Otis House itself was moved.

The wall’s intersection with Boston’s building history does not end there. The significant repair areas were specifically affected during the city’s infamous Urban Renewal in the late 1950s and early 1960s. Urban Renewal demolished a significant portion of the West End neighborhood in the interest of supposedly new and better development. It eliminated Chambers Street and the buildings whose backyards were accessible via an alley that ran along the retaining wall.

Historic New England expects the restored wall to stand for another 200 years as a quiet landmark of Boston’s history and continued evolution.