The Irving and Casson – A. H. Davenport Co. Archive


Discover one of the most important American furniture makers

Irving and Casson – A. H. Davenport Co. was one of the most significant American furniture makers of the nineteenth and twentieth centuries. Long recognized for its fine craftsmanship of furniture and interior woodwork, the company also provided complete interior design services. From cathedral altars to bedrooms, from the White House to a suburban home, Irving and Casson – A. H. Davenport Co. occupied a unique place in the history of American decorative arts. 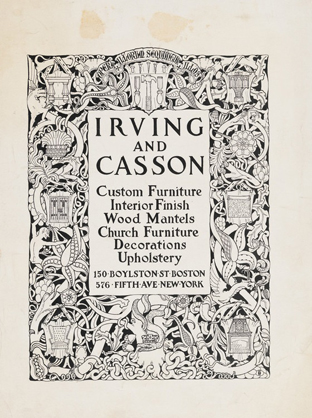 Portfolio containing containing approximately 200 pieces of ephemera, fifteen of which are loose and the remaining arranged by subject in 53 envelopes.

Albert H. Davenport (1845-1906) was born in Malden, Massachusetts, and went to work as a bookkeeper for the Boston furniture maker Ezra H. Brabrook in 1866. Upon Brabrook’s death in 1880, Davenport purchased the company for $139,000 and changed the name to A. H. Davenport Co. Davenport’s business acumen and the artistic talent of his chief designer Francis H. Bacon (1856-1940) helped turn the firm into one of the country’s most successful all-purpose design firms. From its showrooms in Boston and New York, the firm served business magnates such as Henry Clay Frick, F. W. Woolworth, Cornelius Vanderbilt III, and George Eastman as well as middle-class clients. Prominent architects such as H. H. Richardson; McKim, Mead, and White; Peabody and Stearns; and Little and Brown hired the firm to execute many of their designs. Notable commissions included 225 pieces of furniture for the Iolani Palace in Honolulu, Hawaii, during the early 1880s as well as work for the 1902 White House renovation.

The partnership of carpenters Charles R. Irving (1842-1925) and Robert Casson (1848-1931) started in 1874. Beginning with the production of wood mantels and interior finishes, their firm expanded to include furniture among its product offerings. Like Davenport, Irving and Casson worked with well-known architects such as Ralph Adams Cram and began to supply these architects with furnishings with a particular expertise in Gothic Revival church interiors. Taking advantage of their natural business synergies and adjacent factories in Cambridge, Massachusetts, the two firms merged in 1914 to create Irving and Casson – A. H. Davenport Co.

Starting with A. H. Davenport Co. and continuing after the merger, the firm built an extensive reference library and archive containing American and European books on decorative arts as well as scrapbooks containing thousands of pages filled with clippings and photographs. The company also organized its original design drawings in albums by furniture type. Additionally, the firm created more than 200 photograph albums to document its output. Intended not only for employee use, the library was also frequented by the public according to a 1917 publication.

The firm’s business began to decline in the mid-twentieth century and its last major commission was interior work on the United Nations headquarters in New York. Irving and Casson – A. H. Davenport Co. ceased operations about 1973.

With the dissolution of the firm, items from its library and archive began to appear for sale. In the early 1990s Historic New England began collecting this material, including watercolor renderings of interiors and furniture, design sketches, ephemera, and photograph albums. Starting in 2012, and thanks to the generosity of an anonymous foundation and Mr. and Mrs. David A. Martland, along with support from Mr. and Mrs. Nicholas Schorsch and other anonymous individuals, we acquired and catalogued a significant collection of material related to the firm, thus increasing our Irving and Casson – A. H. Davenport holdings by almost 3,000 percent. And the archive continues to grow, both through purchases and generous gifts. For more information on the development of the archive, see the article on page 22 of the Fall 2014 issue of Historic New England magazine. 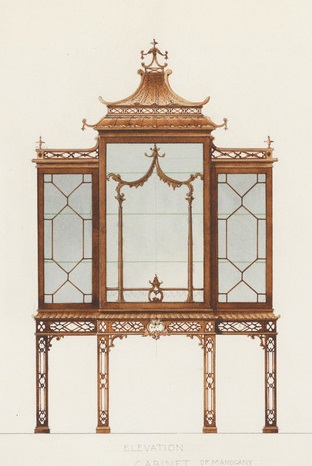 The Irving and Casson – A. H. Davenport Co. archive is organized here in two collections. Collection I includes the material acquired in 2012 and is arranged by type of item: design drawing albums, photograph albums and other photographs, scrapbooks, sales journals, books, and ephemera. Collection II contains all other Irving and Casson – A. H. Davenport Co.-related material and is arranged by acquisition date in chronological order. Included in this group are watercolors, design sketches, photograph albums, scrapbooks, and ephemera. You will find detailed catalogue entries for items such as individual watercolors and design drawings. Other items, such as photograph albums and scrapbooks, are catalogued at a more summarized level. You will find customer names and locations if known.

To explore this fascinating archive, you have several options. Enter any term in the “Search Collections” field of the Collections Access section of this website and see the resulting items. Try searching by a customer name such as George Eastman; by type of furniture such as chaise longue; or building such as the White House. Be sure to also enter “Davenport” in your search field to limit the results to only items in the Irving and Casson – A. H. Davenport Co. collections.

Or start with either Collection I or Collection II, scroll down to the “Browse Collection” heading, and click on any of the records that follow to further delve into the work of this influential company. Lists of known customers and employees are also available.