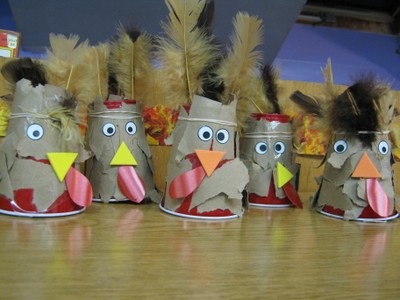 Students in Cambridge, Somerville, and Jamaica Plain, Massachusetts, made turkey noisemakers during the week before Thanksgiving aspart of the Historic Toys and OpticalIllusions after-school curriculum, developed by the education staff at theOtis House Museum in Boston.

After looking at a photograph of Bertram, a turkey who lives at Spencer-Peirce-Little Farm in Newbury, students examined a proclamation of1863, whereby Massachusetts Governor John Andrew and President Lincoln jointlydeclared August 6 a day of national thanksgiving. (August 6 was chosen by Lincoln to commemorate the Union Army’s victory at Gettysburg in July 1863.In October of the same year, he issued a new proclamation that changed theholiday to the last Thursday in November.)

After making their gobbling turkeys (the noise comes from asmall piece of sponge that creates audible friction when pinched and tuggeddown a string on the inside of the cup), students listened to Thanksgiving in the White House, a storyabout how President Lincoln’s son Tad saved the life of Jack, a turkey who wasto be served at the very first Thanksgiving dinner in the White House. Studentsat the Brown Schoolin Somervillehad fun providing sound effects for the story by making their turkeys squawkwhenever Jack appeared in the book. Gobble gobble!