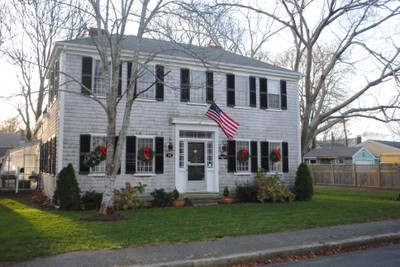 One of eighty-five privately owned properties protected through Historic New England’s Stewardship Easement Program is for sale. Crowell-Smith House in Hyannis, Massachusetts, is a unique opportunity to own a piece of Cape Cod’s maritime past.

This former sea captain’s home was originally located on the corner of Main Street and Pine Avenue and was constructed in the early-nineteenth century for Captain Abner Crowell. In the mid-nineteenth century the house served as a parsonage for the First Baptist Society in Hyannis and had a succession of owners through the end of the nineteenth century into the twentieth century. In 1949 the house was acquired by the Smith family and moved to its present location at 33 Pine Avenue in the 1950s. Crowell-Smith House is individually listed on the National Register of Historic Places, retains much of its original character, and is an important example of transitional Federal and Greek Revival-style architecture.

The preservation restrictions held by Historic New England protect the historically important features of Crowell-Smith House, while allowing the premises to be updated to meet the needs of modern living. To accomplish this goal Historic New England will work closely with all future owners to ensure that all future alterations are done in a sensitive and reversible manner that will impact the significant features of the property as little as possible. The preservation restrictions identify those features that must be preserved as well as those parts of the property that can be adapted to the requirements of modern living.