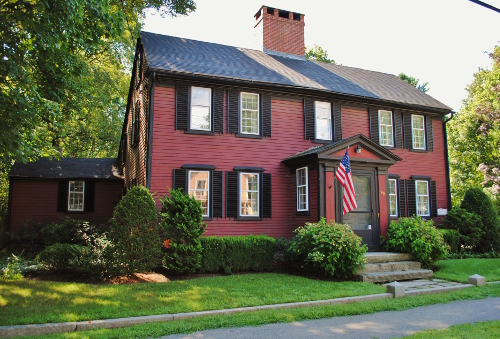 The latest addition to Historic New England’s Stewardship Easement Program is the c. 1653 Scotchford-Wheeler House in Concord, Massachusetts. Scotchford-Wheeler House is a unique and significant piece of New England’s past with an intriguing history. Tradition maintains that the house was constructed by John Scotchford, an original settler of “Concord Plantation,” and was later used to store supplies for the Continental Army during the American Revolution.

After John Scotchford sold the house to Deacon Edward Wheeler in 1696, the house remained in the Wheeler Family through the nineteenth and twentieth centuries. When Richard and Betty Ann Wheeler purchased the house from family members in 1975, they continued the ownership of Deacon Wheeler’s descendants into the twenty-first century. They decided to donate a preservation easement to Historic New England in order to assure that the house will exist as a valuable part of Concord’s architectural heritage for many future generations. Protected by the preservation easement are the house’s significant interior and exterior features, as well as its urban setting.  Notably, this is the first property Historic New England has been able to protect in Concord.