What does your home say about you?

Historic New England’s museum properties range from grand, fashionable mansions to modest farmhouses. Each house tells stories about the people who have lived there. Primary resources in this section include photos, maps, and floor plans of some of our houses. Activities give students the opportunity to learn more about and document their own homes. 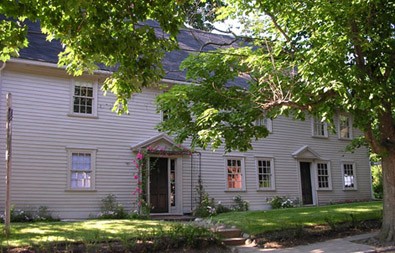 Pierce House, located in the Dorchester neighborhood of Boston, was built in 1683 and was lived in by ten generations of the Pierce family before it became a Historic New England museum in 1968. In its first 200 years, Pierce House changed dramatically as family members adapted the house to meet their needs and changing styles.

When Thomas Pierce purchased the house in 1696, it had two rooms on each of the two floors, casement windows with diamond-shaped panes of leaded glass, gables, and wood shingles covering the roof. Around 1712 Thomas’s son John enlarged the house on the west end, adding an additional room on each floor, making the house more symmetrical. Samuel Pierce inherited the house in 1744 and by 1765 added a lean-to across the rear of the house to create additional, dedicated workspace. His son, Samuel Pierce Jr., remodeled the house in 1765. He extended the east end of the house, replaced the now old-fashioned diamond pane windows, and removed the gable from the roof. He built a more fashionable door, complete with a decorative triangle, called a pediment, over the top.

In the mid-nineteenth century Lewis Pierce installed a second exterior door, leading into the east room. Since then the house has remained largely the same. Lewis and his descendants were particularly proud of the house’s colonial past and conscientiously chose to preserve it.

Do you have any old photographs of your home? Compare the way your home looks today to the photograph. Has anything changed? 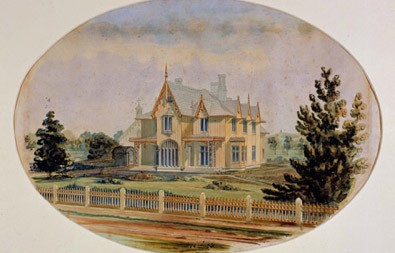 In 1846 Henry Bowen built Roseland Cottage in his hometown of Woodstock, Connecticut, as a summer home for his family. The architect of the house, Joseph Collins Wells, painted this watercolor image of the house. In painting the house he wanted to do more than document what it looked like. He wanted to give a certain impression about the place.

Imagine yourself in the painting. How does it feel to be there? 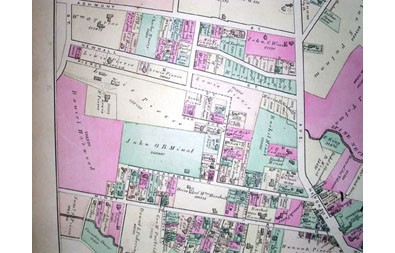 Download this map, which shows the neighborhood around Pierce House in Dorchester, Massachusetts, in 1874, when Lewis Pierce owned the house. Look for Lewis Pierce’s name on the map. Pierce House is the dark gray rectangle in the largest plot belonging to Lewis.

One hundred years earlier, the Pierce family had owned twenty acres – all of the plots labeled “Lewis Pierce” on the 1874 map, plus most of the smaller plots sandwiched in between. In the mid-1800s Lewis Pierce started dividing the land and selling it, a process that continued until Pierce House was left on less than a quarter acre of land.

Today, Dorchester is part of the city of Boston and is very densely populated. By comparing maps we can learn about how much neighborhoods have changed. In the late 1700s Pierce House was surrounded by open farmland. By 1874, the neighborhood was becoming more suburban.

Find an online map site, like Google Maps, and look for 24 Oakton Ave, Dorchester, Mass. Compare what the streets and property lines look like today to what they were in 1874. 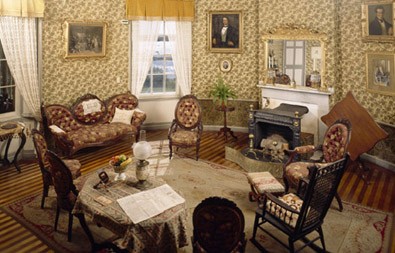 House and Home: Comfort and Style

After getting married in 1857, Richard and Mollie Tucker ordered this set of furniture “in good, modern comfortable style.” They had just bought a house in Wiscasset, Maine, and wanted a living room that was both fashionable and comfortable. Chairs sit near the modern fireplace for warmth, reading materials are ready by the lamp, and an extra table for eating meals or playing games sits out of the way, but at the ready, next to the fireplace.

What’s the most comfortable part of your home? Does your house or bedroom say anything about your style? 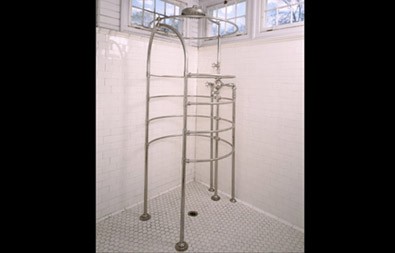 In the early twentieth century, Elizabeth and George Barrett remodeled their house in New Ipswich, New Hampshire. Bathrooms were just becoming common in American homes, and Elizabeth and George chose this particularly elaborate shower. A series of knobs allowed the bather to control the temperature of the water and the direction that the water came out. Fully turned on, the shower would spray the bather from both above and the sides.

Look around your house. What kind of technology can you find in each room? Don’t overlook everyday things like light bulbs and doorbells. 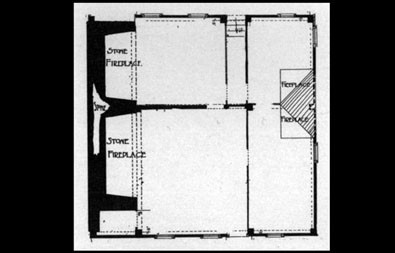 Floor plans show the layout of the walls, doors, windows, and other features of a house. Arnold House was built in 1687 in Lincoln, Rhode Island. One whole side of the house is a massive stone chimney.

Some time after the house was built, a second, smaller chimney was added. Can you find it on the floor plan?

Look carefully at each of the rooms. Can you find the smaller chimney? Why do you think each room has its own fireplace?

Visit Pierce House, one of the oldest houses in Boston.