From records of basic biographical information to collections of personal items and documents, learn how people can tell and have told the stories of themselves and their ancestors. 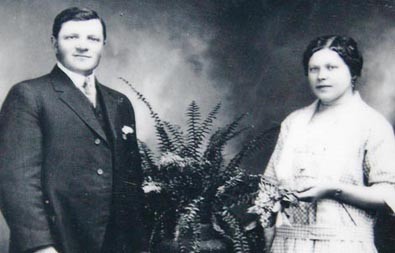 All About Me: Migration

Jacob Stekionis came to the United States from Lithuania in 1914 to work as a tenant farmer. In 1924 he married Dorothy in Lithuania and then brought her back here. He worked the land at what is now Historic New England’s Spencer-Peirce-Little Farm in Newbury, Massachusetts. In exchange, the landowner Edward Francis Little let Jacob and his family live in a farmhouse on the property.

People move from one town to another, one state to another, even one country to another for many different reasons, including work, better schools for their children, and freedom from religious or political persecution.

Do you have any family members or ancestors who moved in order to find work as Jacob Stekionis did? 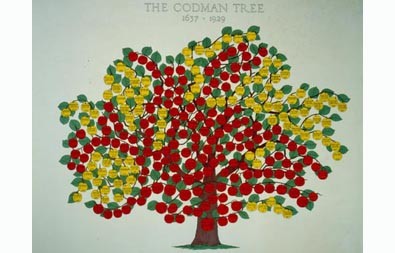 All About Me: Family Trees

This family tree starts with Robert Codman who married in 1637. It shows his descendants, his children, grandchildren, great-grandchildren, and so on all the way to 1929. Each member of the family has his or her own apple, with their full name and the dates they were born, married, and died. The creator of the family tree used color to distinguish between family members with the last name Codman, shown in red, and family members with different last names, shown in yellow.

Can you think of something other than a tree that could represent your family? 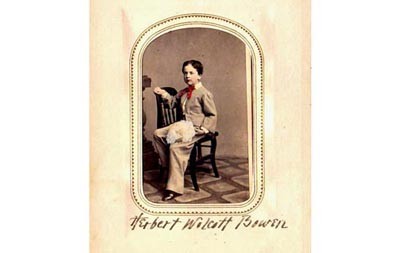 In 1887, Herbert W. Bowen wrote this poem as part of a family project documenting and describing that year’s Christmas celebration.

His goal was to capture the personality of all twenty-six people by describing each person with a single word:

“Why may a single adjective be insufficient to picture the person to whom it is applied? The experiment is well worth making, especially on the present occasion when no fewer than twenty-six portraits are demanded of me.

After reading Herbert’s family portrait, list the members of your family and try to find a single adjective to describe each one. Can you do it without repeating any of the adjectives? 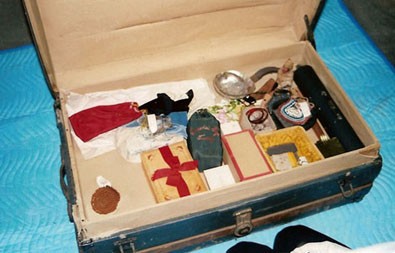 All About Me: Time Capsules

This trunk is like a time capsule, containing souvenirs, diplomas, shells, and letters, among other things. The items belonged to two sisters, Katherine and Frances Eliza Little, who lived in Newbury, Massachusetts. They both died of tuberculosis while young women, Katherine in 1907 at age twenty-one and Eliza in 1917 at age twenty-seven. We believe a family member put all these objects together after the sisters had died. The trunk tells the story of their lives.

What kinds of objects would you put in a time capsule to tell people in the future about your life?

All About Me: Autobiographies

Edward A. Bowen published his book Lineage of the Bowens of Woodstock, Connecticut in 1897. In his preface, he writes “This volume is the result of a curiosity to know something of my Bowen ancestry.” Edward spoke with family members and historians, researched documents and records, and was able to follow his family’s journey from Wales, Great Britain in the 1500s to New York City in the 1890s.

This is what he has to say about his own life:

“Edward Augustus Bowen was born in Brooklyn January 31, 1847. He was educated at the same schools his elder brother attended.

“In February, 1864, he entered the employ of Messrs. Fitch, Estee & Co., stationers, 3 Park Place, New York city. He remained with them a year, and then left to accept a position in the office of Robinson & Ogden, brokers, 4 Broad Street. After having been with this firm a year he was offered a clerkship in the New York city offices of Messrs. Jay Cooke & Co., bankers, corner of Wall and Nassau streets. He began his duties the first day that Jay Cooke & Co. opened their New York office for business. He remained with this firm nearly three years, and left to become a member of the firm of Smith, Seaver & Bowen, stock brokers, 8 Broad Street. At the end of a year he withdrew from the firm, having joined his father and brother in the purchase of ‘The Brooklyn Daily Union’ newspaper.

“In the autumn of 1873 he sold his interest in ‘The Union,’ and shortly after bought a place of about five acres in Woodstock, Conn., where he spent several summers; his winters were spent in the counting-rooms of ‘The Independent,’ New York city. After his father purchased the Bowen homestead of Capt. Andrew W. Bowen, he carried on that farm for four or five years.”

What aspects of your life would you write about in an autobiography? 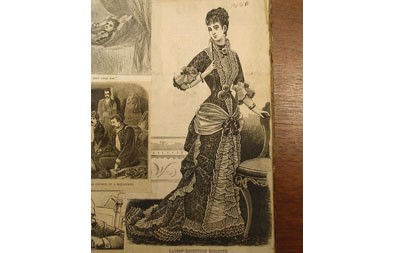 All About Me: Scrapbooks

Antoinette Louise Pierce lived from 1863 to 1937 in Dorchester, Massachusetts. Throughout her life she kept scrapbooks. She saved documents about her family history and newspaper clippings about local and national history. She also kept recipes, card game instructions, programs from the theater, and knitting patterns, which give us clues about her hobbies and personal interests.

This document is from a page in Antoinette’s scrapbook from 1881, the year she graduated from Dorchester High School. It is a very fashionable ball gown, known then as a “Ladies’ Reception Toilette.”

How does this gown compare to dress styles of today?

What kinds of things could you include in your own scrapbook to show some of your hobbies or personal interests?

What important things have happened in your family that you want to remember?

How could you document some important events that have happened around the world, in our nation, or even in your hometown?

See a list of programs that Historic New England offers to homeschool families.