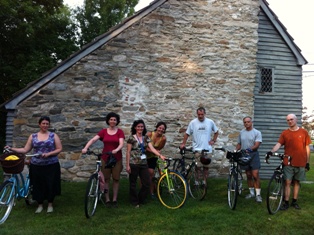 Historic New England’s Clemence-Irons House was a stop on a Woonasquatucket River Greenway bike ride, organized by the Woonasquatucket River Watershed Council, on the evening of August 2. A group of cyclists toured the 1691 stone-ender and learned about the early history of Providence and Johnston, Rhode Island (Johnston, originally part of Providence, was incorporated in 1759). The ride, guided by Sarah Zurier of the Rhode Island Historical Preservation and Heritage Commission, continued on to tour the Sweet and Irons family cemetery, Lymansville Pond, Manton, and Dyerville Mill.

If the combination of history and exercise gets your heart pumping, then join Historic New England this fall for History Hikes on Saturday, September 15, and Wednesday, October 3. Walk through the beautiful, rolling trails of Lincoln, Rhode Island, and learn about the history-filled landscape from the seventeenth century to today. Tours begin at Arnold House and travel through Gateway Park to Chase Farm Park and back again.