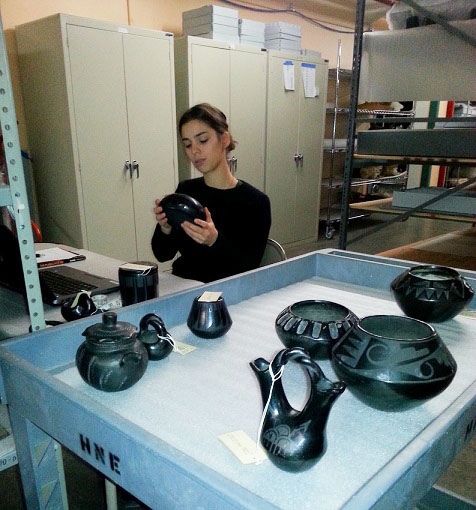 Historic New England is fortunate to work with many interns and volunteers. This winter, Kirsten Tatterfield, an undergraduate student at Bennington College in Vermont, divided her internship between Historic New England’s object and archival collections. For seven weeks, Kirsten learned about objects conservation, art handling, inventory tracking, and archival cataloguing, and helped out with the Collections Care Project. She also helped photograph and research a collection of Native American pottery from Phillips House. She describes her research below: 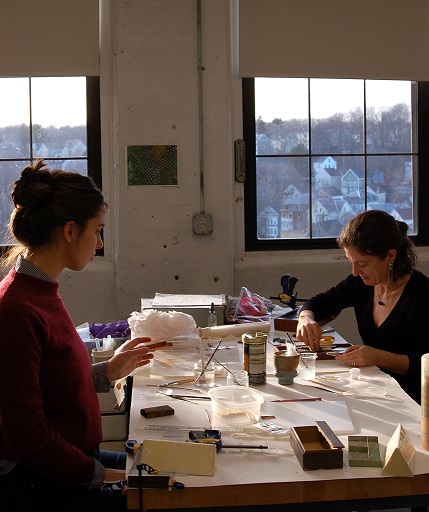 When Historic New England’s Phillips House first opened as a museum in 1973, its founder, Betty Phillips (1906-1996), preserved the furnishings and knickknacks inside the house as a memorial to the Phillips family and to Salem’s Great Age of Sail. Betty’s husband, Stephen Phillips (1907-1971), had made multiple trips to the American Southwest during the late 1920s, 1930s, and 1940s. Some of the objects displayed in his childhood bedroom included a collection of black-on-black Pueblo pottery from New Mexico.

In 1908 and 1909 archaeological digs in New Mexico uncovered several pieces of centuries-old black pottery. Edgar Lee Hewett, leader of the digs and author of the Antiquities Act of 1906, contacted San Ildefonso potter Maria Martinez (1887-1980) to see if she could recreate the decorative process. Maria mastered the technique and many San Ildefonso potters were invigorated by the new creative possibilities of the style. The revival of black pottery lasted through the 1920s and into the Great Depression.

To help preserve fascinating objects like these, please consider making a donation to the Collections and Conservation Fund.