Preserving a door to the past at Hamilton House 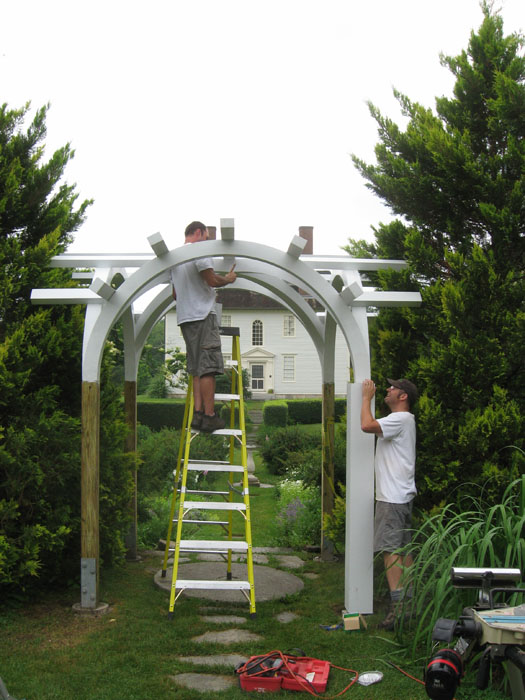 When you arrive at Hamilton House in South Berwick, Maine, the Goodwin Barn is the firstbuilding you encounter. At forty feet wide by seventy-two feet long and thirty-five feet tall, with two large and elaborate sliding doors, it isan impressive structure. Historic New England’s carpentry crew recently made a significant repair to one of the barn’s doors.

In the nineteenth century, when the Goodwin family owned theproperty, the barn was located next to the house. It served a central role as part of a working farm. Emilyand Elise Tyson moved the barn after they purchased the property in 1898. The Tysons madesubstantial changes to the barn’s structure, re-configuring doors andwindows and adding a large ell.

Sometime after 1903, a pair of large doors in thegable ends were moved from the interior to the exterior. They continue tosee regular use today. In recent use, the south-facing door began to fail and become increasingly difficult to use.

After evaluating thecondition of the door, Historic New England’s property care team had to strike a balance between preserving the original material, which may date to the Tysons or before, and the need tokeep the door functional. We decided to replace the frame while salvaging as many ofthe other components as possible.

We also carefully considered paint color. While the barn has been red since 1960, recentpaint analysis and our own records indicate that it was not always so.Careful study of paint evidence from the barn and house revealed that thebarn was painted a very pale gray during the Tyson era. We decided topaint the door pale gray, with the ultimate goal of restoring the entire barn to this color.

After carefully documentingthe dimensions and construction of the door, the vertical boards that coveredthe frame were carefully removed, documented, and stored for reuse. A temporarylayer of plywood was attached to the frame to allow the door to function whilenew components were fabricated.

After making new framemembers and sheathing boards in the Historic New England carpentry shop at the Lyman Estate, weassembled the new frame in the barn. Roughly half of the older sheathing boards were repairedand repainted, and new material was prepared to replace damaged boards. The oldframe was taken down and the new frame hung in a single day.

A few weeks later, therepaired and newly painted windows were reinstalled. The door is tight andsound, and its crisp appearance is calling out for the rest of the barn tofollow.

Please consider helping us fullyrestore the Goodwin Barn at Hamilton House with a gift to the PreservationMaintenance Fund.