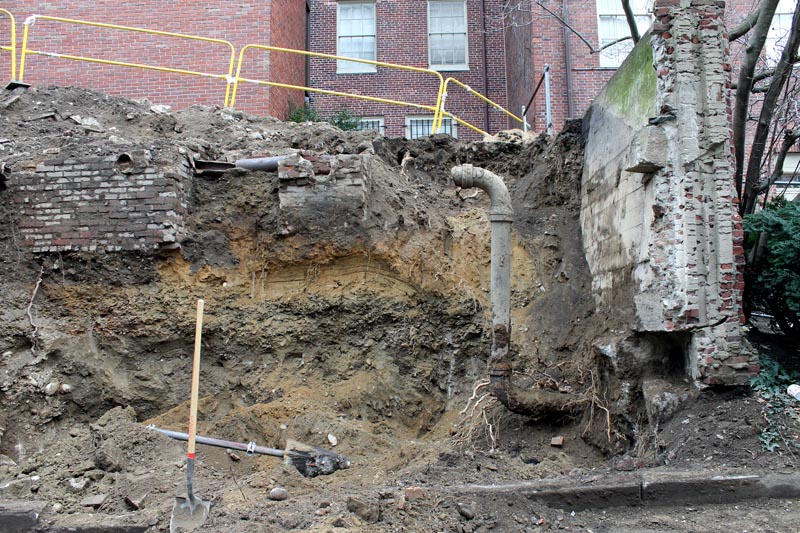 At Historic New England, our staff works to preserve a wide range of properties, from seventeenth-century stone-enders to working farms and mid-century Modern. Despite the breadth of projects this entails, our team can still be surprised by things we find during preservation. Repairs to a retaining wall at Otis House are shedding light on the development of the 1796 Federal-style property and the history of Boston’s West End.

In 2014, archaeological investigations done in advance of the repair project revealed several masonry structures in the small yard area above the wall. The fact that these structures existed relatively unscathed (despite the construction of a six-story stair tower in 1976) was amazing. Archaeology analysis considered these structures to be evidence of early drainage efforts at the site, possible foundations for early outbuildings, and even evidence of patios for the residents of Lynde Street row houses that have since been torn down.

As the wall dismantling progresses, we are fascinated to find even more of these brick structures, along with evidence of what might be twentieth-century drainage. Archaeologists from the Public Archaeology Lab (PAL) are adding these new discoveries to their analysis. Additional objects found in the area might help us narrow the date of construction of the retaining wall itself, for which we lack documentation.

These discoveries came as surprises to our team, and demonstrate how a project designed to ensure the stability of a historic building can help reveal its history. Stay tuned for more information as this project continues.

At Otis House and other Historic New England properties, the tasks of repainting, repairing, and occasionally rebuilding never stop. Help ensure that these buildings and landscapes survive for future generations by making a gift to the Preservation Maintenance Fund.