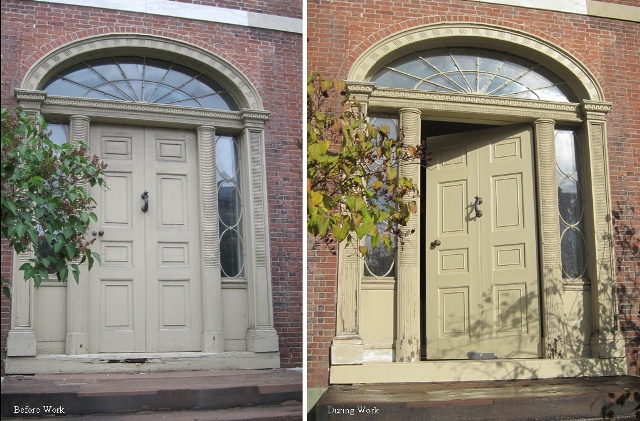 Conservation and repair work have improved the front entrance to the Otis House, the last surviving mansion in what was Boston’s most elite eighteenth-century neighborhood, then called Bowdoin Square. Designed by Charles Bulfinch in 1796 for Harrison Gray Otis, a lawyer and mayor of Boston, the Federal-style house requires protection from moisture infiltration and the harsh New England climate. Work has been ongoing since late September to repair several of the wood windows and exterior doors.

The repair work at the front entrance along Cambridge Street has been particularly exciting to witness. The entrance is very elaborate, with semicircular pilasters on either side of the eight-panel wood door, flat pilasters lateral to the sidelights, an entablature over the door, and an elliptical architrave over a fanlight. The door is further enriched with delicate wooden ornamental trim, readings, flutings, and fret dentils.

Documentation indicates that the door is original to the date of construction while the moldings and trim were added in the mid-nineteenth century and in 1925, after the house was moved back forty feet when Cambridge Street was widened.

A new and improved threshold has been installed and will last for many years. Simple repairs to the trim and repainting continue at the entrance, which can be seen from the street. Check out the progress and come for a tour. The house is open year-round, Wednesday through Sunday from 11:00 a.m. to 5:00 p.m.