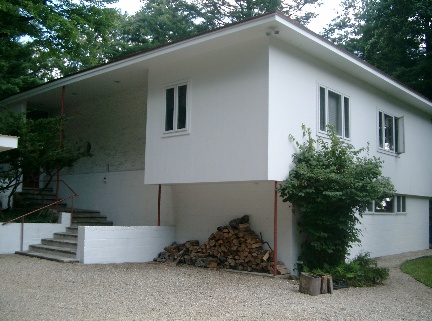 For the first time since its construction in 1937, Hoover House in Lincoln, Massachusetts, is for sale. Constructed by the renowned Modern architect Henry B. Hoover for his own family, the house began Hoover’s career in residential architecture. It was also the first Modern house built in Lincoln, a town known for its collection of early Modern residences.

During his career, Hoover designed and worked on over twenty-five other Modern residences in Lincoln. The American Modernist-style Hoover House is set on top of a hill overlooking the Cambridge Reservoir. The original 1937 design included eight rooms, plus a half basement.

Hoover paid particular attention to the site of his house; he designed the landscape himself and made sure the layout of the house complemented the topography. Hoover also used fenestration to maximize the sunlight and/or shade that the roof overhang created within the house.

In 1955 Hoover enlarged the house by adding a bedroom wing, radiant floor heating, and a carport. He also enlarged the kitchen, changed the front entrance, and enlarged the living area windows while installing single-pane glass with aluminum frames throughout the house.

In 1989 Henry B. Hoover died, leaving the property to his three children, who ensured its long-term preservation by donating a perpetual preservation easement to Historic New England in 2004.

The Boston Globe Real Estate section recently featured Hoover House in its article, “Want to Own a Modern Marvel?”