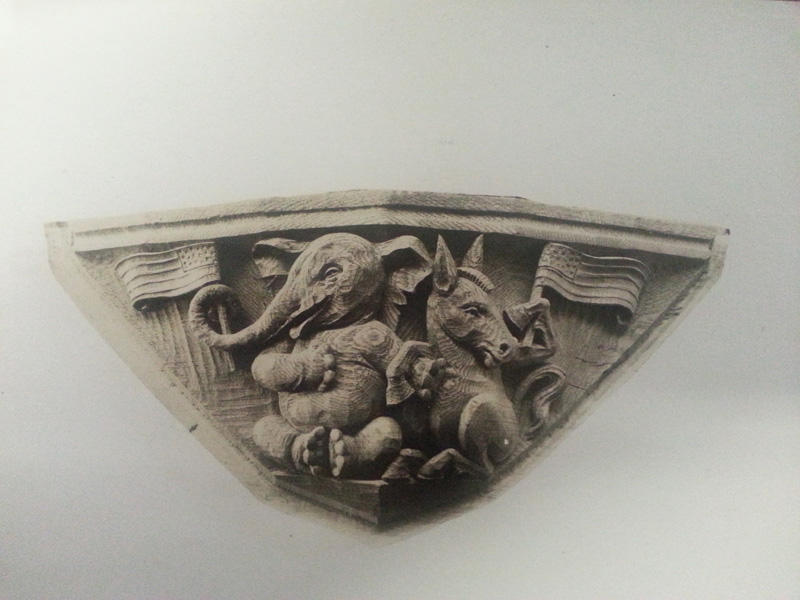 The whimsical carving in this photograph shows an elephant and a donkey arm in arm, holding American flags. This depiction of friendship between the icons of the Republican and Democratic parties is found not in a government building or politician’s home but in a much more surprising location: a church.

It was carved by the firm of Irving & Casson – A. H. Davenport Co. in the late 1920s on a misericord, in Christ Church Cranbrook in Bloomfield Hills, Michigan.

A misericord, or small ledge projecting from the underside of a folding seat, allows a standing person to rest on it. Typically found on choir seats in Christian churches, misericords are often adorned with carvings of biblical scenes, angels, and saints meant to evoke feelings of piety. In this case, were the choristers instead inspired to pray for cooperation between political parties?

This photograph is one of thousands of images in Historic New England’s vast collection of design drawings, photographs, and other material from the firm of Irving & Casson – A. H. Davenport Co., one of the finest American manufacturers of furniture and interior woodwork from 1880 until the 1970s.

An eighteen-month project of cataloguing and digitizing this collection is underway. Upon completion in late 2015, you will be able to browse over 8,000 images from the collection in our Collections Access database.