Inside the Collections Care Project: From Paris to Parian 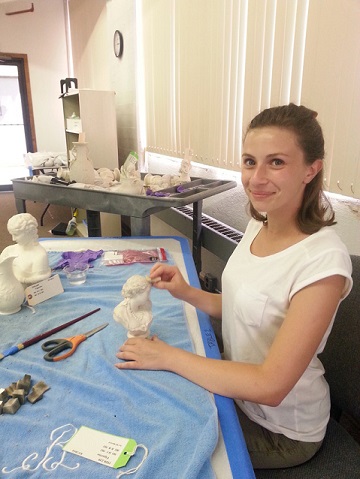 Every summer Historic New England welcomes an intern from France sponsored by the French Heritage Society of Boston. Typically, the intern divides her time between the Library and Archives at Otis House and our collections and conservation facility in Haverhill, Massachusetts. This summer we welcomed intern May Elyssa Driss, a graduate student of Museology at the Ecole du Louvre, Paris. The Collections Care Project team enlisted May to help process objects in temporary storage that will soon be moving back into a new, upgraded storage space in Haverhill. Below is a taste of May’s summer internship.

My mission during my internship was to help clean, photograph, and catalogue part of Historic New England’s large collection of parian figures and decorative objects. I focused on a particular group of parian collected by Historic New England founder William Sumner Appleton and accessioned into the collection in 1927. It includes more than fifty objects dating from the nineteenth century.

What impressed me about the parian was its marble-like beauty. Parian is a type of bisque porcelain, an unglazed white ceramic, that was purposely produced to mimic stone. Produced beginning in the mid-nineteenth century, it took many forms, most often figures, small statues, and small decorative objects like boxes and vases.

I wondered who could have possessed such pieces of art, and the answer was unexpected. The figures, sometimes commonly called “biscuits,” were much more affordable than comparable works in bronze or marble and more durable than plaster. They often copied well-known artwork, literary characters, or classical subject matter. Their relative affordability and artistic merit made them very popular with the status-conscious and cultured Victorian middle class.

The figures were produced in great quantities. Indeed, Historic New England inventories mention that Appleton purchased most of them from antique dealers at prices ranging from fifty cents to ten dollars.

The parian collection has quite a diverse subject matter, reflecting the varied tastes of its time. I discovered busts of political figures, such as Washington, and literary figures, like Shakespeare, next to figures such as shepherds, cherubs, and monkeys, which recall an eighteenth-century European aesthetic. Alongside these were figures of Neoclassical goddesses draped in togas which, based on the number in the collection, must have been a motif that was greatly appreciated. Decorative objects such as vases, boxes, and dishes are also part of the collection, and remain lovely enough to impress any guest.

To help us continue to preserve and give access to Historic New England’s extensive collection of New England art, wallpaper, textiles, and household objects, please consider a donation to the Collections and Conservation Fund.