Inside the Collections Care Project: A feast for the eyes and the stomach 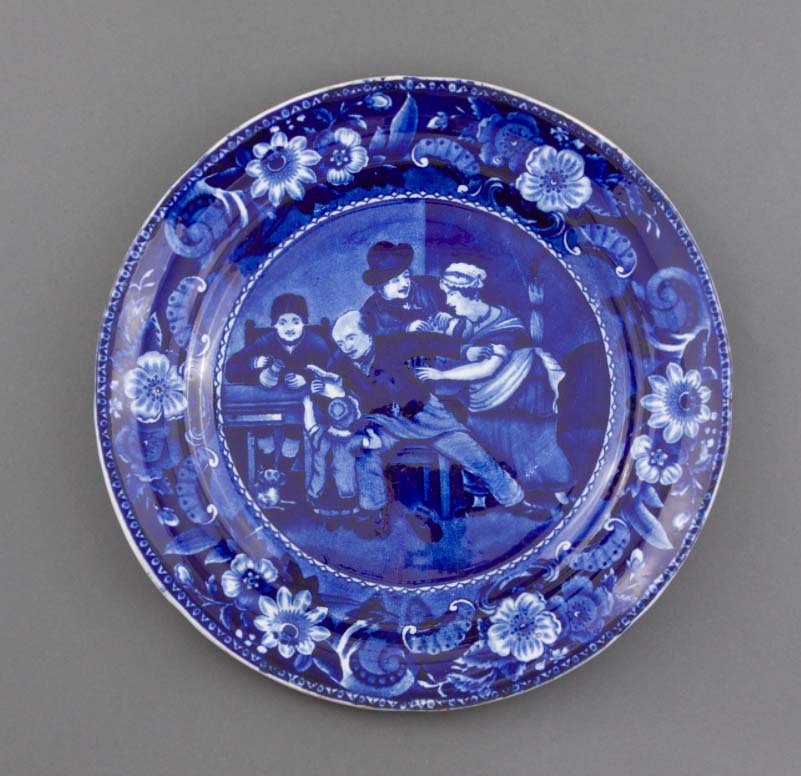 With some 22,000 objects safely in temporary storage, the Historic New England Collections Care Project team is spending the winter cleaning and photographing objects and updating records to improve access to these great objects on our website. Currently, we are elbow deep in ceramics, of which transferwares of all colors and descriptions make up a large percentage.

Transferware is a type of pottery in which a pattern or image is applied by transferring a print from a copper plate to a specially sized paper and finally to the pottery body. If you look at a piece of transferware closely you can see the design is made up of fine lines and dots similar to an engraved print on paper (zoom into one of our online images to see for yourself).

Transferwares became readily available, and wildly popular, in the United States in the early nineteenth century. The majority of transferwares were produced in Staffordshire, England, by numerous potteries in a dizzying array of patterns and forms. Potters often produced themed dinner sets based on a series of related images (e.g., exotic locations, Bible stories, natural or man-made landmarks, or military battles) often directly copied from popular prints or artwork of the day.

Such is the case with today’s object, a blue transfer-printed plate produced by potters James and Ralph Clews at Colbridge, North Staffordshire, between 1818 and 1834. The plate’s pattern, “The Valentine,” was one of several in the series “From Wilkie Designs” based on the paintings of artist Sir David Wilkie (1785-1841). In this lively domestic scene, a young woman tries to rescue what we can only guess is a love letter intercepted by her father as her concerned beau looks on. Now that looks like an interesting Valentine’s Day!

Check back with us next week as we add more images to our Collections Access portal. If you like what you see, please consider a donation to support the ongoing preservation of these treasures with a gift to the Collections and Conservation Fund.