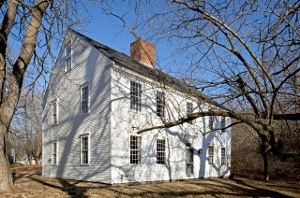 Constructed in the Georgian style, the house retains its center entrance plan with wide center chimney. It also retains many Georgian features, including raised-field paneling, softwood floors, fireplaces, and wrought-iron hardware, all of which are protected by the easement.

This house was constructed by Captain Andrew Fuller, who fought in the French and Indian War and served as Middleton town clerk from 1765 to 1782. His sons John and David, who were born in the house, fought in the Revolutionary War. The house was owned by Reverend Ebenezer Hubbard from 1816 to 1828, and by Daniel Richardson and his descendants from 1834 to 1951.

Charles Hadley Watkins and Lura Woodside Watkins purchased the house in 1951 and restored it under the direction of Roy Baker in 1952. Charles and Lura were antiquarians, avid collectors, and close friends of Bertram and Nina Fletcher Little, renowned folk art collectors and onetime owners of Historic New England’s Cogswell’s Grant in Essex, Massachusetts. Their son, C. Malcolm Watkins, served as head curator at the Smithsonian National Museum of American History.

Captain Andrew Fuller House was filled with Watkins family treasures and those of Malcolm’s wife, Joan. Following Joan’s death in 2013, many of these items were divided between area museums including Old Sturbridge Village, Peabody Essex Museum, Fuller Craft Museum, and Historic New England. Among the items that Historic New England received are: