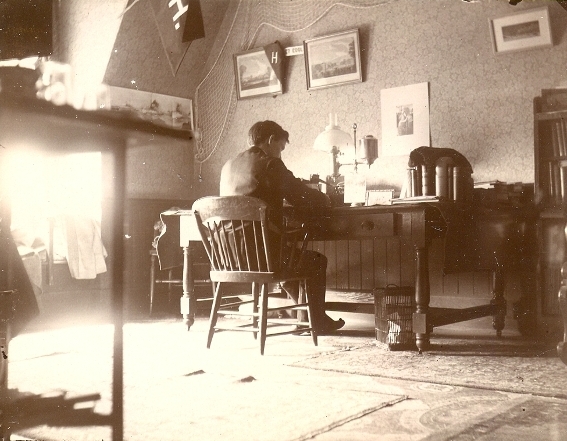 Members of the Harvard Club of the North Shore recently discovered a connection between the Phillips family in Salem, Massachusetts, and their own scholarly past. During a visit to Phillips House, the group enjoyed a house tour that pointed out the many Harvard-related objects on display including prints, engravings, plaques, books, and even young Stephen Phillips’ teddy bear, dressed in a crimson sweater. While these films and objects and stories belonged to the Phillips family, they brought up many memories of enjoyable times spent in Harvard Yard for members of the club.

Education was an important tradition of the Phillips family. Four out of five generations attended Harvard College and their perspectives on education strike a familiar chord with any college student. In his autobiography, Stephen Willard Phillips writes, “I have always enjoyed looking back to my college experiences and have taken a keen interest in college matters. I…believe that education is one thing and learning a job is another, and that they are not the same and that one should not substitute for another.” His philosophy follows the ideal that students should “learn to think clearly and learn to express themselves clearly.”

Stephen Clarendon Phillips, the grandfather of Stephen Willard, was the first generation of the Phillips family to attend Harvard. His son, Stephen Henry Phillips, began his Harvard career in 1838 and left a detailed journal of his first-year experiences. Much like college students today, Stephen Henry worried about examinations, roommates, homesickness, rushing to class, getting lost on campus, and eventual success. When he wasn’t fretting about these issues or studying history, the Classics, or geometry, he spent his time “kicking a football” or learning the “sophomore tricks.” During his time at Harvard, Stephen Henry pledged to “obey the laws and gain knowledge.” He didn’t “consider college the place to go to create disturbances or for killing time.”

Visit Phillips House year round to learn more about the Phillips family, their domestic staff, and early twentieth-century Salem.