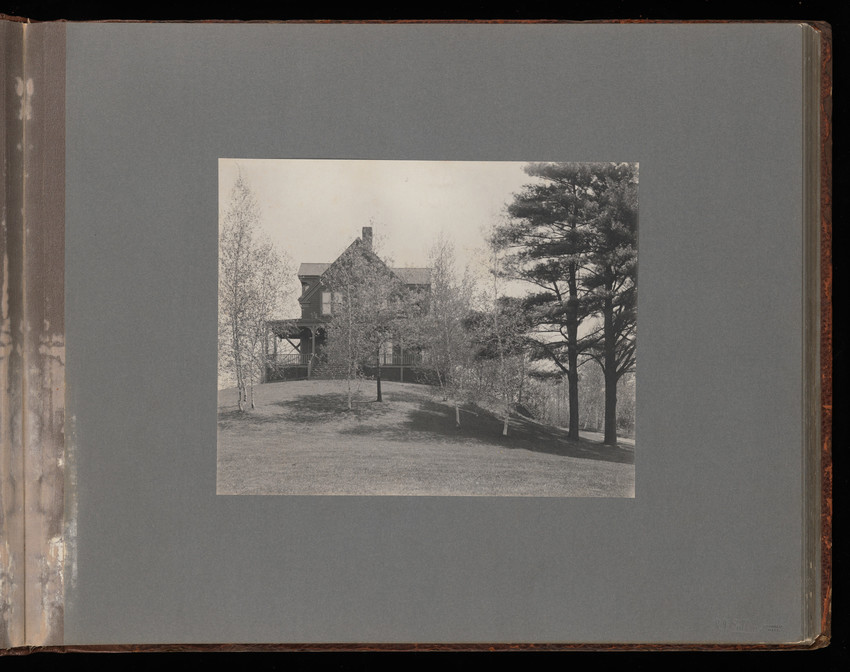 This album is embossed with "Birch Knoll, Franklin, Massachusetts" on the cover. The album contains seventeen black and white photographs of the interior and exterior of a home owned by Anna Wilkinson Rathbun taken around 1900. The photographs in this album are all stamped by the photographer R. J. Calkin of Franklin, Mass. Each photograph shows wonderful detail in furnishings, rugs, paintings, woodwork, and decor, giving insights into the family's domestic life (see pages 8 and 9 for wallpaper). One room has many drawings on the wall indicating someone in the family may have studied art. Another room shows an interest in sports, with golf clubs hanging on the wall.

According to the book "New England families, genealogical and memorial" by William Richard Cutter, the Wilkinson family was a highly esteemed and respected family of Providence, Rhode Island. Anna Reed Wilkinson was born on January 10, 1870. She attended Wellesley College and married Edward Harris Rathbun, son of a prominent Woonsocket, Rhode Island, family. They had four children. Anna and her family lived in Woonsocket, Rhode Island, and at Birch Knoll in Franklin, Mass. Her second child, Henry Lawrence, was born at Birch Knoll on July 18, 1900.

Anna's brother, Henry Lawrence Wilkinson, was born on August 10, 1865, atteneded school in Providence, Rhode Island, and graduated from Amherst College in Amherst, Mass., in 1888. He worked as an assistant bank examiner for Connecticut and Rhode Island, and he later worked as an investment broker for Richter & Company of Hartford, Conn. He married Bertha Sanford of Bridgeport, Conn., on June 4, 1896.

Cutter, W. (1913). New England families, genealogical and memorial; a record of the achievements of her people in the making of commonwealths and the founding of a nation;. New York: Lewis Historical Pub.