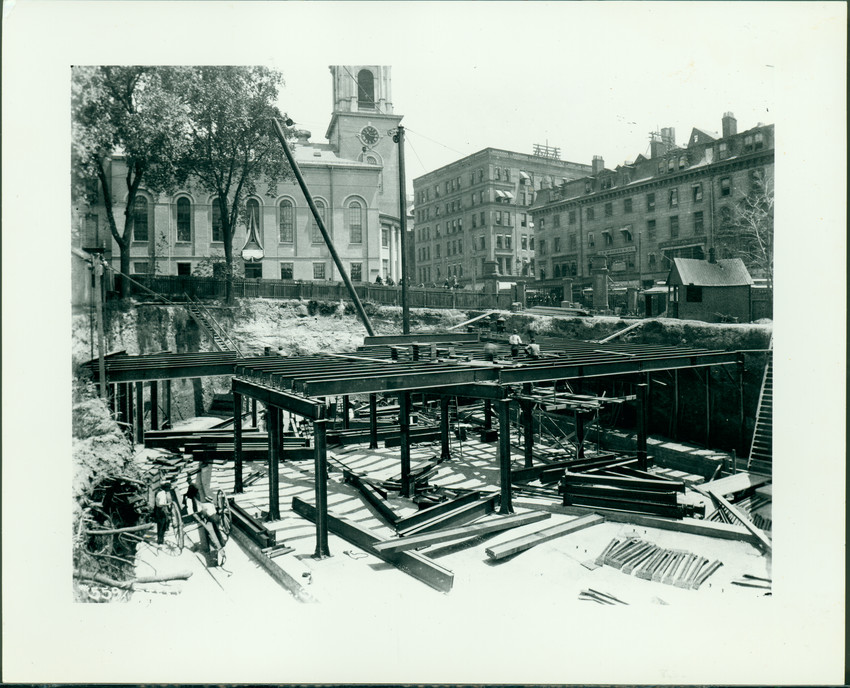 In transit history, Boston was the site of many "firsts": the first subway in the United States, the first underwater tunnel in North America, and the first professionally staffed agency for urban transit, the Boston Transit Commission. In the 1880s and 1890s, Boston experienced traffic congestion that created public demand for a solution.

The decision to build an underground system was an engineering challenge that also led to the nation's first unified system of rapid transit. Tunnel and elevated lines were combined into a network of loops and feeders linking Boston's hub with the streetcar suburbs.

The intense public scrutiny to which the Boston Transit Commission was subjected was a prime motive behind the profuse and painstaking photographic record-keeping that created this archive. Professional photographers, working with cumbersome and fragile glass plates, documented the system's growth with an estimated 200,000 photographs.

While much of the original archive has been lost, the 20,000 images now at Historic New England remain a priceless resource. They provide a vivid chronicle of the urban environment during the critical period when the city was transformed from a residential to a working metropolis.

The Boston Transit Archive is obviously of prime importance to historians of architecture, transportation, and engineering, but it also is a gold mine for researchers in specialized categories relation to New England and American culture. Because the photographers' purpose was explicitly to document, they recorded quantities of information peripheral to the primary subject of each image: the contents of shop windows; street life and clothing; back yards; housekeeping practices; parks and street furniture; billboards and advertising images.

In addition to the glass plates, the archive includes an extensive collection of prints, photographs albums, logbooks, and architectural drawings.

Paper finding aid in the Library and Archives.