Suffragists with a protest banner during President Wilson's visit to Boston, Mass., Feb. 1919 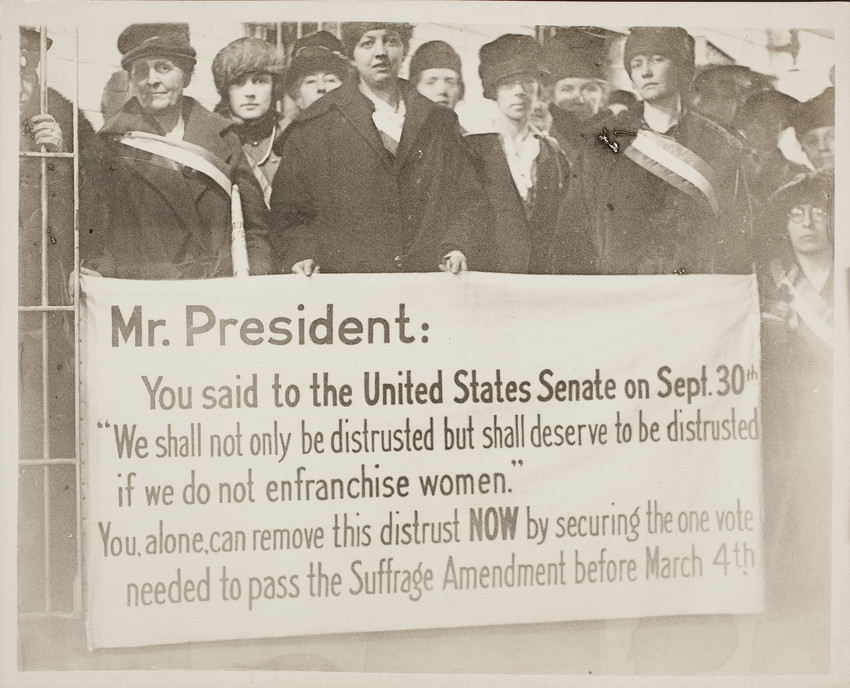 The banner reads: "Mr. President: You said to the United States Senate on Sept. 30th 'We shall not only be distrusted but shall deserve to be distrusted if we do not enfranchise women.' You, alone, can remove this distrust NOW by securing the one vote needed to pass the Suffrage Amendment before March 4th."

The following is taken from the caption: Suffragists posed with banner used at protest during President Wilson visit to Boston, Mass., in February of 1919. Photograph is reported to have been taken at the Charles Street Jail where a number of suffragrists were held when they refused to pay the $5.00 fines imposed after their arrest. The woman to the far right of the photograph, wearing glasses, is most certainly Martha Foley, one of those arrested. The woman holding the banner is possibly Ruth E. Small, and it may be Katherine Morey to her right.

Shortly after 10 AM on February 24, 1919, 22 women marched from an office at 9 Park Street to the grounds of the Massachusetts State House. Once there, they took up stations immediately in front of a reviewing stand erected for a parade honoring the visit of President Woodrow Wilson. Disregarding warnings from police officers that they would be arrested, the women stood quietly by holding signs demanding the vote for women. "Mr. President, how long must women wait for liberty?" asked a banner carried by Miss. Josephine Collins of Framingham, Mass.As promised, police arrested protesters and booked them on charges of loitering and, in one case, speaking without a permit. Fines of $5 each were imposed on all but two of the women. Most of the women refused to pay the fine or appeal the judgment, and were imprisoned in the Charles Street Jail.The fines of three of the women were paid by one E. J. Howe. The women involved claimed that no such man existed, and that the authorities merely wanted the ringleaders of the protest out of the jail. Another woman was involuntarily ejected from the jail after her brother paid the fine against her will.The protesters would eventually prevail - the Nineteenth Amendment was ratified on August 26, 1920, granting women the right to vote in the United States.