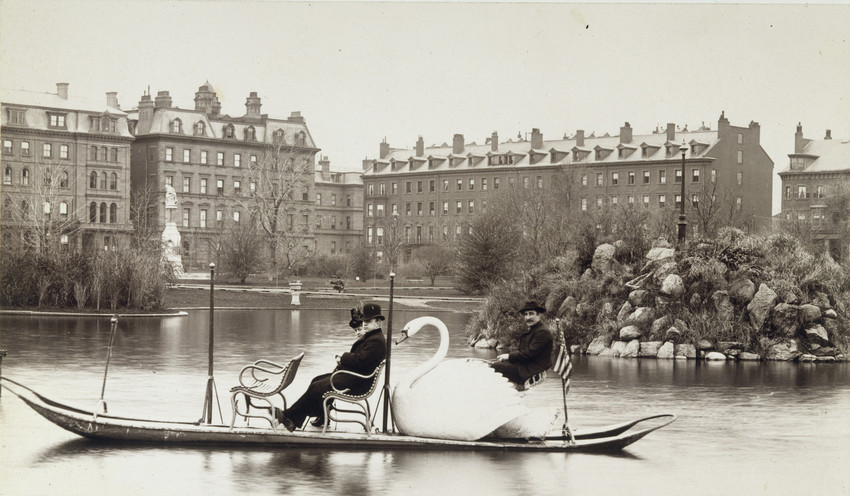 The majority of the prints in the Oversize photographs series of the General Photographic Collection are nineteenth-century views of Boston buildings and streets, including works by Southworth and Hawes, James Wallace Black, John Adams Whipple, and A. H. Folsom, dating from the the 1860s to the mid-1880s. James Wallace Black documented the devastation of the Boston Fire of 1872. Besides Boston, Roxbury and Brookline, Massachusetts are well represented. Other subject matter encompasses government buildings, such as the State House, and group portraits, including the employees of the W. K. Lewis Brothers Pickle Factory. There are photographs of events such as the New England Methodist Centenary Convention of 1871. Many of the photographs are streetscapes that depict businesses, residences, and people in the area. This series also includes panoramas and marine views. It is partially cataloged.A related collection of oversize photographs from the Codman Collection, including Boston buildings and European travel views, is located in a separate drawer of the map file housing the general oversize collection. The Standard-size photograhs series of the General Photographic Collection is the largest and most complex component of the photographic collections, containing an estimated 200,000 items, dating from the 1860s to the present. The geographic coverage and subject range of these images are very wide. The work of many individual New England photographers and photographic firms, such as William T. Clark, Baldwin Coolidge, Halliday Historic Photograph Company, Mary H. Northend, and Thomson & Thomson, are represented in this series. The collection includes many types of photographs, from albumen prints to modern gelatin silver prints. Postcards are an important source of documentary information about a variety of commercial, residential, civic, and industrial buildings which were often ignored by photographers in search of the picturesque. They have left a record of many hamlets and small towns which otherwise would have gone unrecorded in the photographic record, as well as the major resorts and main streets whose glory has faded. The Small photographs and postcards series of the General Photographic Collection contains approximately 5,000 postcards and 5,000 snapshots and prints smaller than 4 x 5 inches. The postcards date from the 1890s to the 1930s. The geographic scope of the postcards is similarly expansive. Boston is most richly documented, followed by resorts and important manufacturing centers throughout New England. Small town merchants often commissioned postcard views of local sites of interest, such as civic buildings, parks, and imposing residential streets, which provide otherwise unavailable information about many areas not typically considered tourist attractions.In the Standard-size photographs series of the General Photographic Collection (PC001.02), there are 8 x 10 photographic proofs for many of the postcards manufactured by Thomson & Thomson and the New England News Company. On the versos of each print are detailed instructions for hand-coloring the images. Many proofs show evidence of manipulation in the form of decals of cars or pedestrians, which were intended to enliven these scenes.Snapshots and prints include a wide range of subjects, especially historic buildings and transportation. There is a significant group of images of 17th and 18th century structures which a number of architectural historians took in the approximate period of 1910 to the mid-1940s. Of particular value are those pictures made in the course of repair or restoration that reveal structural features. Overall, the emphasis is on domestic architecture, notably on Cape Cod, in southeastern Massachusetts, Rhode Island, and eastern Connecticut.The subject areas of the small photographs of exceptional strength are sailing vessels, arranged by vessel name; lighthouses from Maine to New York Harbor; trains and railroad stations; and miscellaneous vehicles. Stereo views, or stereographs, are the double-views that were used as parlor entertainment starting in the mid-1850s. The Stereo views series of the General Photographic Collection contains more than 10,000 items, dating from the late 1850s to the mid-1880s.The emphasis of most stereographic photography was on the "here and now," rather than on the evocation of New England's past. In this sense, they are an exception source for the study of mid-19th century business blocks, town centers, parks, the homes of prominent individuals, factories, mills, and public works, which signified the "march of civic progress" so dear to Victorian pride. "Historic" buildings, other than those associated with literary or patriotic figures, tend to be less well-represented, though the practice of posing local residents in front of their homes and businesses provides occasional glimpses of the architecture of the late 18th-century to early 19th-century, especially in non-urban areas.The majority of the stereo views are arranged by localities. Boston is particularly well covered by nearly 1,500 views of churches, streets, public buildings, the harbor, and parks. In some cases, these scenes are intertwined with noteworthy events, such as the Peace Jubilees of the 1860s and early 1870s, the Centennial parades of 1876, and the tragic aftermath of the Great Fire of 1872. The last mentioned event is extensively documented with several hundred views. arranged by streets.Outside of Boston, the best represented communities include: Portland, Maine; Newport, Rhode Island; Newburyport, Lawrence, Lowell, and Oak Bluffs, Massachusetts. Many industrial and manufacturing subjects are depicted. In Oak Bluffs, the coverage of camp meetings and the cottage architecture which replaced the earlier fanciful tents with equally fanciful building forms is of especial interest. There are more than 1,000 stereos scenery of the White Mountains in New Hampshire, hotels, and popular tourist attractions, including the construction and completion of the Cog Railway. These images range from the early views of the Langenheims of Philadelphia in the late 1850s to many hundreds by the Kilburn Brothers of Littleton, New Hampshire, made in the 1870s and early 1880s. John Soule, Nathan W. Pease, and the Bierstadt Brothers are only a few of the other major photographers whose works are part of the collection. Sources: Guide to the Library and Archives, 3-6, 15-16; Oversize Photographs Finding Aid.