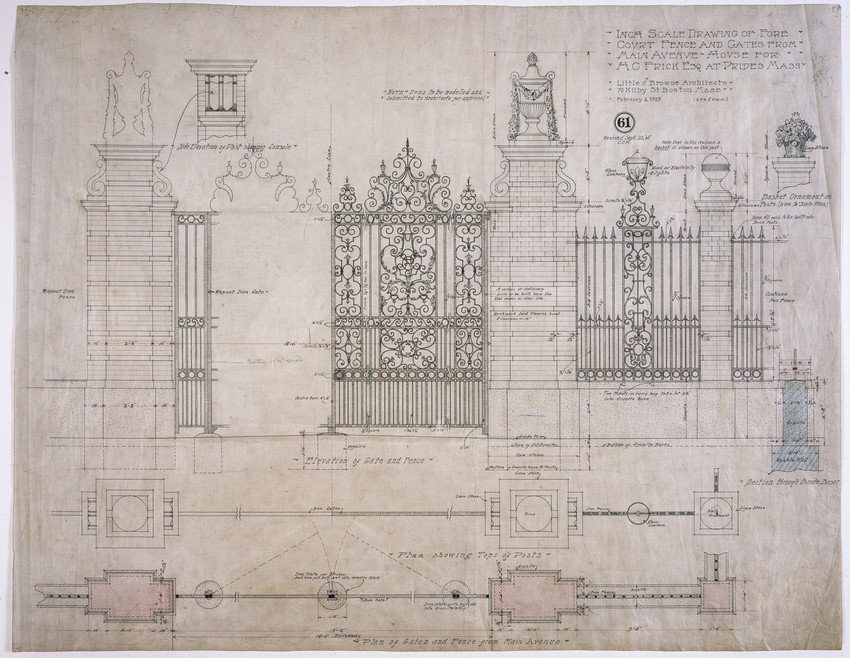 The partnership of Arthur Little and Herbert W. C. Browne from the early 1890s until the 1920s attracted a circle of affluent clients in Boston, Brookline, the North Shore of Massachusetts, and in locales outside of New England, such as Washington, D.C. They designed typically elegant, neo-classical townhouses and country estates. The collection consists of materials for twenty-four of their projects. In addition to architectural drawings, the related resources include account books outlining cumulative expenditures incurred by several clients, often with contractors' names; a scrapbook of furniture designs planned for specific residences; Browne's architectural library, which testifies to probable design sources; and correspondence from both men to Ogden Codman, Jr. (See the Name index of the Codman Family Papers for locations.) Dating from the period of Little's independent practice are the plates drawn for his pioneering "Early Interiors of New England" (1877), which sparked interest in the Colonial Revival style.

Boston architects Arthur Little and Herbert Browne formed a partnership in 1889 with George A. Moore. The fruits of their collaboration were a series of commissions -- largely from a wealthy elite -- for ambitious town and country houses that reflect a taste for elegant and sometimes sumptuous neo-classical designs. These are an interesting foil for the "Colonial" features characteristic of Little's independent work in the 1880s, some of which is also represented by this collection. The drawings which are described in the following inventory appear to be the only ones which survived the dissolution of the firm in 1939. Despite their quantity, they hardly reveal the full scope of the firm's practice which can be partially reconstructed through the fortunate survival of cumulated accounts. These document in some detail the expenditures, contractors and subcontractors involved in projects between the late 1890s to the mid-1920s. Not only are these accounts an invaluable supplement to the collection of drawings, but they also are useful for estimating the real costs of "palatial" architecture.

Besides the cumulated accounts, the Library and Archives holds other records useful to interpreting the Little and Browne firm. Photograph albums and loose photographs, which the firm apparently compiled, document completed exterior, interior, and landscape designs for several clients. These also include one volume of clippings, presumably assembled by Herbert Browne, and reflect his interest in garden design. The architectural library of Herbert Browne, consisting of approximately 250 late-sixteenth to late-nineteenth-century English language works, with particular strengths in English sources of the classical revival. That this collection was important to Browne, both intellectually and sentimentally, is suggested by the existence of a handwritten catalogue, ornamented with his hand-colored designs. There is also a folio-size album of furniture designs and decorative details, some original, some derived from other sources. Many were custom made for specific clients, and fabricated by specified cabinet makers. Besides sketches (some in color) and annotations, there are some photographs and clippings. The album appears to date from the earliest years of the firm's practice when they were affiliated with George Moore. It is indexed by client's name.

The Codman Family Papers contain approximately 100 letters from Little to his fellow architect and close personal friend, Ogden Codman, Jr., as well as copies of letters sent by Codman to Little. Dating from the 1890s and early 1900s, these are largely personal in nature, but nevertheless important for their passing reference to architectural subjects and tastes. There is significant overlap in clients between the Codman and Little and Browne architectural practices.

Finally, Kevin Murphey wrote his master's thesis at Boston University in1985 on Arthur Little's connection with the Colonial Revival movement and his subsequent turn towards neo-classical tastes. Associated with this work, there is a small quantity of correspondence from descendants of Little's wife, Jessie Means Little, solicited by Mr. Murphey. Sources: Guide to the Library and Archives; Little and Browne finding aid.

Paper finding aid available in the Library and Archives.

Arthur Little was born on November 29, 1852 in Marshfield, Massachusetts. He was educated at the Chauncey School in Boston, studied architecture at the Massachusetts Institute of Technology, and graduated in 1875. After continuing his architectural education in France and traveling extensively in Europe, he worked as a draftsman in the Boston firm of Peabody & Stearns. When he began his own practice, he focused on domestic architecture and strove to revive the styles of the seventeenth and eighteenth centuries. Herbert W. C. Browne was born in 1860 in Boston, Massachusetts. He studied at the Museum of Fine Arts in Boston, traveled abroad, and continued his architectural education in Paris and Rome. On his return from Europe, he worked at the firm of Jacques & Rantoul.

Little, Browne and George A. Moore formed a partnership in 1889. Moore withdrew from the business several years later. Little and Browne designed residences for many prominent individuals, such as the Faulkner Farm in Brookline, Massachusetts and the Larz Anderson House in Washington, D.C. Browne was actively involved with the Society for the Preservation of New England Antiquities, known today as Historic New England, as a member of the Board of Trustees. Little died on March 27, 1925 in Boston, but Browne continued practicing in collaboration with Lester Couch. Browne died on April 29, 1946. Source: Withey, Henry F. and Elsie Rathburn Withey, Biographical Dictionary of American Architects Deceased, 83 and 374-375.